Every month, lawmakers in states mulling over sports betting legislation get an increasingly strong reminder that without full-fledged online wagering, they might as well not pass a bill.

That reminder comes from New Jersey, which in January set a new record with betting handle of $385.3 mm, eclipsing November’s former high-water mark by an impressive $54.6 million, and last month’s tally by more than $66 million.

Of that total, 79.2% was generated online, continuing a trend where online encompasses a larger percentage of industry handle with each passing month.

Total online handle for January clocked in at over $300 mm for the first time in the industry’s eight-month history ($305.0 mm to be exact), shattering last month’s then record of $241.0 mm, for month-over-month growth of 26.6%. By contrast, the land-based industry has been marked by stagnancy, with handle coming in at $80.3 mm, up just $2.2 mm over last month, and down nearly $12 mm from November.

Did the frigid January cold play a factor in the tepid performance of land-based betting? Sure. And while we do expect land-based sports wagering to find better footing in the spring months, it’s hard to envision it comprising more than 20% of NJ’s sports wagering industry ever again — online wagering just has that much momentum, especially now that new online and mobile books from Churchill Downs, Resorts, and Hard Rock have entered the scene.

For the month, sports betting revenue came in at $18.8 mm, representing a slight downturn from December, when revenue was $20.8 mm. Revenue and hold percentage are expected to dip even further in February, as bettors beat the books for a healthy $5 million on the Super Bowl, much of it due to FanDuel Sportsbook offering new players 53-1 moneyline odds on both sides, and with a disproportionate amount of money going in on the New England Patriots.

On the online side, it was once again Resorts Digital, comprised of DraftKings Sportsbook, BetStars NJ, and now Resorts Sportsbook, that led the charge, generating $6.89 million in revenue. Of this total, it’s presumed that DraftKings Sportsbook accounted for the overwhelming lion’s share, as it has in previous months. And it must be noted that the DraftKings Sports Betting National Championship, a weekend-long high roller event from Jan. 11-13, inflated the DK handle in this particular month by nearly $4.65 mm.

Don’t forget @DKSportsbook had a weekend where they let me and other sharps bet as much as we wanted during DKSBNC.

Well not quite as much as we wanted, right @RufusPeabody?

The New Meadowlands Racetrack license, made up of FanDuel Sportsbook and relative newcomer PointsBet, wasn’t all that far behind, bringing in $5.85 million. FanDuel also beat out DraftKings on the land-based front, with its book at the Meadowlands generating $1.17 mm compared to the DraftKings-branded book at Resorts AC doing a paltry $242.6k in business. Yes, it’s that much better to be located in the main population center of northeastern New Jersey compared to Atlantic City, especially in the winter.

That being said, Resorts looks to have benefited from DraftKings in more ways than one, as its online casino revenue was up sharply from $3.76 mm in December to $5.78 mm. We hardly find it a coincidence that the surge coincided with the launch of online casino games on the DraftKings Sportsbook platform. DraftKings has recently expanded its offering to include Live Dealer games, and will likely add more games with regularity going forward.

The only other online license to bring in anything resembling significant revenue was the state’s only thoroughbred track, Monmouth Park, which saw $1.17 mm in revenue. The license is occupied by both William Hill and Play SugarHouse in New Jersey. The land-based book at Monmouth racked up the second most revenue of any retail venue, generating $830.8k. Of the land-based venues in Atlantic City, Borgata was tops at $635.6k, although its online arm (playMGM) had yet another horribly disappointing month, with just $41.9k in revenue.

The recent release of the playMGM app on desktop may help its situation a bit, or it could just be too little, too late, in what has quickly become a highly competitive and saturated sports betting landscape.

With the NFL playoffs in full swing, it came as little surprise that football wagers generated a healthy $82.1 mm in handle. However, with so few games on the schedule, it was basketball that ended up stealing the show, with handle coming in at $135.6 mm. Bettors did well at picking b-ball winners last month, as hold only came in at 1.3%.

Parlays accounted for $66.5 mm in handle and “Other” sports a rather impressive $92.7 mm. In February, the Oscars will be included in that “Other” category, so it will be interesting to see what kind of attention the first non-sports betting vehicle in the New Jersey market attracts.

See below for a snapshot of the industry’s performance in January, and for deeper insight, the full NJ Division of Gaming Enforcement press release can be found here. 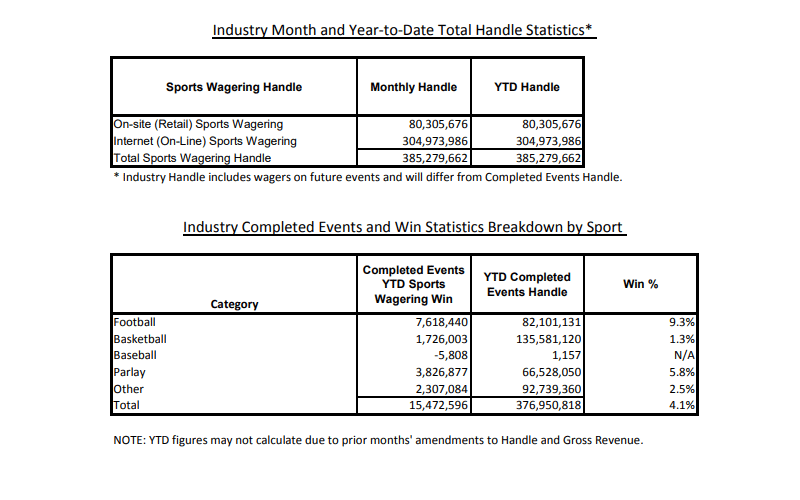