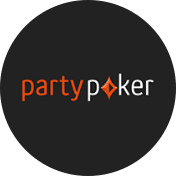 Party Poker nJ
70
* Please note - Our star ratings are based on our personal opinion of the gambling sites we work with. We also take customer feedback into account in our rankings.
100% UP TO $600 DEPOSIT MATCH

Back in the early 00s, during the golden age of online poker, Party Poker was the undisputed king. The site was founded in 2001 and grew to become the epicenter of Internet poker action across the globe. But when the U.S. federal government passed the Unlawful Internet Gambling Enforcement Act (UIGEA) in 2006, the site decided to leave the lucrative market for fear of violating the law.

Party re-entered the U.S. in 2013, this time completely legally, through a partnership with Atlantic City’s Borgata. The company uses its own proprietary software to power both its own virtual card room and that of Borgata’s as well. Both sites share player pools, giving users more cash game and tournament options.

Create a Partypoker NJ account using the links on this page, or the code below, you’ll receive a generous bonus of 100% of the deposit amount, up to $1,000.

Create an account using any of the links on this page, or use the code above, and PartyPoker will match your first deposit 100% up to $600. There are wagering requirements attached to this offer, but you can clear the bonus money in the online poker room or playing casino games.

Your deposit bonus is released in 10 equal increments; which unlock when you generate points during play ($1 for every 4 points playing poker). Thus, for the maximum $600 bonus you will need 240 points from poker to earn each of your ten $60 bonuses. The bonus funds expire 60 days following the qualifying deposit.

If you are an online poker veteran going back to the pre-Black Friday era, you’ll instantly recognize the design aesthetics when you sit at one of Partypoker’s tables. Its not a deal breaker but calling the graphics dated is a bit generous. In my opinion, compared with the other New Jersey poker sites, Party has the worst combination of color palette and table animations and only a few customizable settings.

The software itself doesn’t performs well, as they have upgraded the software many times since they first launched in 2013, but it still has a retro feel to it. Software crashes are few and far between and overall is an enjoyable experience.

The lobby is functional, with the ability to filter cash game tables by stake, amount of seats, game type and more. Sorting is limited, though, as you can’t sort by seats available, amount of money per pot, or even see the players at the table without clicking on the stake you want to play and opening up a mini lobby on the side. This is an inconvenience, albeit a small one, especially for those trying to grind many tables at once.

Couple that with stake specific (as opposed to the standard table specific) waitlists, and it is apparent that Party is trying to eliminate bum hunting (the practice of searching out weaker competition to sit with) from its cash games. For the long term sustainability of the game, this concept is a positive, and probably outweighs the inconvenience it brings to the individual player.

The mobile app is a watered down version of the main Party poker offering. The lobby takes a bit of getting used to, with the sorting/filtering options not being intuitive and also taking up a third of the screen. The ability to sort by players at a table (which you can’t do by default in the full version) is a welcome addition.

The real problem is when you sit down at the tables: the sounds are annoying (they can thankfully be turned off), but PartyPoker has added auto-rebuy feature for most cash game tables.

Instead, you can either use preset bet amounts (like ¾ pot, pot, etc.), or use a wheel-like graphic which can give you more precise bet types as you move it up and down. Expect to time out occasionally as you attempt to narrow down the exact bet you want under the pressure of a rapidly falling timer.

You can jump in any of your favorite cash games, Sit & Gos, and tournaments with only a couple taps, however, so it is quite simple to get yourself into the action in no time flat.

Partypoker’s flagship daily tournaments are a $10K and a $2.5K guarantee, which are the standard for online poker in New Jersey. A well designed structure, flat payouts (meaning they pay a higher proportion of the field), the occasional overlay, and a good mix of regular and non-regular players make these tournaments attractive to anyone. The daytime events are not as exciting, though, offering paltry guarantees, a lack of variety, and minimal satellites.

As of late, Party has been having a bit of difficulty hitting the guarantees on its daily $10k and $2.5k, and has even been forced to cancel the $10k a few times. Cash game traffic is also down, and according to Pokerscout, the sites garners 40 to 50 percent less than rivals WSOP/888 and PokerStars. This was only magnified when WSOP was able to join player pools from NJ, DE and NV. Party is set up to take a bigger slice of the pie when other states are able to join the interstate pact.

According to its website, Party takes out 5% in rake for every cash game pot, which is on par with its New Jersey competitors. The maximum rake per hand dealt is generally higher, however, which means more money taken out in the biggest pots across all stakes.

If I had to use one word to describe the promotions Party offers its loyal players, it would be: “weak.” According to the website, under “Promotions”, there are only 3 categories:

The rewards you can “buy” with these points are limited to tournament tickets, casino bonuses, and cash. In some instances (all the cash rewards, for example) you are only eligible for the rewards if you are a certain status or above (gold for the cash). In others, you can use your points to claim a prize from any status level, but will get a better price when you’re at a higher status. In other situations, everybody gets the same price.

It is a bit difficult to make heads or tails of it all, but the store is still a decent option for getting rakeback. On the site, Party still makes mention of gadgets and other tangible items being available, but they are nowhere to be seen in the actual store.

Party poker also offers Missions, which are basically a checklist of simple accomplishments to complete while you play your favorite games (play a certain amount of hands, knock someone out of a tournament, etc.). Upon completion of these tasks, you can earn more in bonus.

The missions start out pretty simple, but the rewards are also pretty mundane. As you complete missions, they get harder with slightly better prizes.

Live poker is known for being a social activity and Party attempts to bring that social interaction to the online felt with Friends Lists and an in-client messaging system. Being able to follow your friends’ accomplishments in real time was a mildly interesting novelty at first, but it become tiresome after the 1,000th update.

To date, the only messages I have received have been from opponents giving me unsolicited poker advice, and in a not too friendly way! I applaud the attempt by Party, but it would probably be better off with the Messaging system turned off.

Partypoker/Borgata is known for their Garden State Super Series (GSSS), which it rolled out in 2014, and which has occasionally been hit with technical problems.

In fact, it still doesn’t seem like Party has full confidence in its software, as the latest iteration of the GSSS series is a shell of its former self. The festival used to have over 60 events with heavy prize pools, culminating with a $250,000 guaranteed Main Event. In comparison, the Spring 2020 series offered only 20 events, with a $75,000 gtd main event. We can only speculate the true reasoning behind this drastic change, but it probably has to do with declining traffic (due to PokerStars), connection issues, stoppages, and tournament cancellations in most of their previous GSSS series.

It’s a shame, because GSSS was the defining aspect which set Partypoker apart from the other New Jersey online poker sites. No other site had anything which came close to competing with it, and even with the issues (which were comparatively mild in recent editions) it was the most highly anticipated tournament series for New Jersey players.

You can make your deposits using all of Party’s banking methods with no fee. Choose from the following:

Withdrawals are possible via:

Partypoker does a good job of being visible on the main poker forums, letting players know of updates and acting as a virtual middleman to relay issues from players to company execs.

Live Support is a good option as well, even if communication is not instantaneous (chalk that up to being spoiled by excellent non-poker live support). You can also reach Party by email, which can be time consuming, or can work perfectly, depending on the agent you speak with.

The site also deals with numerous common issues in the FAQ section on their website, but it’s difficult to find, with no actual mention of it on the homepage. You have to know to click “Contact Us” which is buried in a tiny link on the bottom of the page.

partypoker NJ verdict
Bottom Line
In such a small market, partypoker can’t rely on name recognition alone. Unfortunately, since the inception of New Jersey online poker, the site has taken a few steps back. However, the effort is still there and NJ players will certainly find an enjoyable playing experience of the site. With the recent entry of PokerStars, the poker scene in New Jersey is getting a little crowded, but Party Poker is set up to be a major player again once other states join in the interstate compact in the future.
The Good
The Bad
3.5
Overall Rating