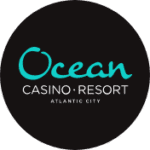 Ocean Online Casino NJ
76
* Please note - Our star ratings are based on our personal opinion of the gambling sites we work with. We also take customer feedback into account in our rankings.
$1500 MATCH + 50 FREE SPINS

Launched in July 2018, Ocean Online Casino is the digital offering from one of Atlantic City’s most recently built casinos, Ocean Resort. The land-based property opened on June 28, 2018 and occupies the same space as the former and much maligned Revel Casino.

Like its land-based counterpart, Ocean Online still has a bit to prove if it hopes to break into the upper echelon of a very competitive marketplace and came out the gate swinging with a $10,000 deposit match bonus, but has since cut that down to a still juicy $1500 deposit bonus plus 50 Free Spins.

Register an Ocean online casino account and ride the ocean tide with a 100% deposit match bonus up to $1500 spread out between your first three deposits.

How it works – Free Spins

When you deposit at least $50, you’ll be awarded 50 Free Spins which can be used on the following games:

The wagering requirement to clear the bonus funds acquired during these free spins is 30x, so don’t expect to get rich during this no-deposit bonus, but it does give you a chance to make some extra cash.

How it works – Deposit bonus

To take advantage of the maximum available bonus you’ll need to make three deposits. On the first deposit, the site will match your amount by 100% up to $500. The second and third will subsequently be matched at 50% up to $500 each. That means, to get the max amount, you’ll need to deposit a total of $2500.

What’s not so special?

Boasting games from all the big names in online gaming such as IGT, Everi and NetEnt, Ocean Online Casino has an expansive library of games whether you like slots, table games or video poker.

Ocean Online Casino has a large selection of games, but lacks the ability to sort by any means aside from “New” and “All.” There is a search feature at the top of the screen, but if you do not know the exact game you are looking for, you are going to have to scroll through hundreds and just guess that you want to play that particular slot. Most sites have the option to separate by slot type, game provider or return, but Ocean casino leaves you to find what you are looking for.

That being said, their selection has grown year after year, month after month to be a very respectable selection. After making a deal with NetEnt to bring their games to the site, Ocean Casino brought their value up from an average of 92% RTP to a wide selection of games that offer much more value at 97+% RTP. The NetEnt deal also brought the most popular Jackpot slot Divine Fortune to their site. Divine Fortune routinely offers jackpots in the six figures with a tiny minimum bet of $0.20.

Other highlights include games from Konami like China Shores, and Great Tiger from Everi. Ocean also apparently has a love for modern takes on old school slots: Smokin’ Hot Gems, Double Diamond, and several others buck recent industry trends with their emphasis on fewer paylines and distaste for over-the-top bonus structures.

One area where Ocean online casino spared no expense is in its Slingo selection. A large selection these slot-bingo hybrid games populate the slot lobby, offering players a chance to parlay a small investment into a gigantic score.

Sadly, the site’s table game selection is rather unimpressive. They cover all the major table games, but offer almost the bare minimum variations.

While they seem to have all their bases covered, this is quite a paltry list compared to other online casinos in New Jersey.

Those who fancy a bit of skillful gaming will be pleased to know that Ocean online casino does support some very good video poker games. Four popular Game King variants, including Jacks of Better, and Double Double Bonus, populate the lobby, and feature returns of approximately 99% or higher.

There are also two GAN branded games. GAN Jacks or Better game is a 9/6 game returning 99.54% with optimal play, making it one of the best investments on the site. Just consider dodging GAN’s Deuces Wild game, as it’s paytable is far from optimal.

In addition to the six single line games there is a one-off title called PokerBet. Previously exclusive to Betfair Casino, this unique twist on traditional poker lays players odds on simulated Texas Hold’em hands, but only returns 95%.

With each passing week, Ocean online casino has ramped up its promotional schedule, and we’re excited to see how far it goes. For now, there’s a fair number of promos on the site, although admittedly, they vary pretty widely in terms of quality and value.

Other promotional vehicles witnessed on the site include a leaderboard (Suite Sound of the Ocean) where the top earner wins his or her choice of a $1,000 site credit or a 6 night stay at a studio suite at Ocean Resort Casino in Atlantic City. Unfortunately, the amount of play required to earn this reward is mammoth. Another recent promotion at the end of baseball season offered free spins for deposits, with extra bonus spins for the number of runs scored in playoff games on the day of deposit.

There’s also still an offer (Sail the Seven Seas) where slot players that earn 50 daily points for 60 days (over a course of roughly three months) win an invite to a slot tournament, where the grand prize winner will be whisked away on a 117-day world cruise. Second and third place prizes are also available.

To climb the tier ladder, earn the above points in one calendar month, and begin enjoying your rewards. Depending on your tier level, you can convert your points to 1x bonus cash at varying rates. Once you turn them over at a 1x, you can continue to play with the now converted bonus money, or withdraw the funds.

Ocean online casino may not have the most eclectic bunch of cashiering options, but there’s more than enough ways to get money on and off the site to satiate most players.

Noticeably absent from the list is PayPal transactions, which is unfortunate as this method appears on many NJ online casino sites. It’s likely that PayPal will come soon.

Ocean online casino is powered by GAN, the same platform provider behind the excellent Betfair Casino site in New Jersey. Because of this, we saw a few games that were previously exclusive to Betfair pop up on Ocean, such as EZ Baccarat, GAN Deuces Wild, and PokerBet.

On another high note, the software is rich with account management features. With just a click or two, players can access their account statements, bonus history, responsible gaming settings, the help menu, their tax statements and more.

Ocean is currently only supported on PC/Mac desktops and laptops. It is accessed through a browser-based client that is compatible with all major browsers including Google Chrome, Mozilla Firefox, and Safari for Mac.

The lack of a mobile app for Android and iOS devices is confounding and frankly, unacceptable. Every other online casino in New Jersey supports an app, including the equally new Hard Rock Casino. Ocean insists that a mobile app is coming, but they have been live for several years, and still no app leads us to believe that it is not a priority.

As for the PC version of the software, it runs smoothly enough, although we did experience the occasional hang-up and software crash early on, but they seem to have made upgrades to the software which makes it virtually bug free. Oceans desktop site rarely has any hiccups, crashes or location issues, which is a huge plus when you get on a roll.

Support on Ocean Casino was a but hit or miss. Agents, when they were available to speak to, were pleasant and appeared knowledgeable on most of the basics, but the tough questions eluded them. That said, whenever we had to raise an issue to a higher up, it was swiftly and accurately addressed.

In addition, Ocean supports an FAQ section and knowledge base, although both could use a bit more filling in.

Risen from the ashes of the defunct Revel, comes Ocean Resort Casino. The land-based facility opened on June 27, 2018 (the same day as Hard Rock Casino) ending a nearly four-year period in which the facility was closed to the public.

Following the Revel’s shuttering in September 2014, the Revel was sold to billionaire Glenn Straub for pennies on the dollar, $82 million (by comparison the Revel cost a reported $2.4 billion to construct). The expected reopening date of the facility, eventually rebranded as TEN, was June 15, 2016. That date, along with many other supposed launch dates, came and went, and yet Ten remained shuttered. Throughout, Straub engaged in a vehement battle with the state over whether he needed to procure a casino license, leading some to believe that he never actually intended to open TEN.

In January 2018, AC Ocean Walk, controlled by Colorado developer Bruce Deifik bought TEN. The casino was rebranded once again, this time to Ocean Resort Casino, and a tentative reopening date of summer 2018 was slated. This time, predictions became reality, as after pouring $35 million in renovations, Ocean AC was opened to the public in late June.

So far, early reviews of Ocean AC have been a decidedly mixed bag, with some praising the changes that were made, and other complaining about long lines and how the venue really isn’t that much different (or better) than the Revel.

Ocean Online Casino Verdict
Bottom Line
Ocean online casino got off to a sluggish start, but has since added a number of high profile games, and recurrent promotions. It still has a bevy of kinks to work out, and the absence of a mobile app is unacceptable, but we do believe these issues will eventually be rectified.
The Good
The Bad
3.8
Overall Rating