Live Dealer games, one of Europe’s most popular online gambling formats, have arrived in New Jersey.

Live Dealer first debuted with Golden Nugget Casino in August 2016, followed closely by FanDuel Casino, who was still Betfair Casino at the time. Since then, many more sites have begun offering them and it has become a prominent feature in the New Jersey market. These online casinos represent the only choices in the US where players can experience the benefits of gambling in a live casino environment, without actually having to visit one.

On this page, we’ll explain what this innovative format is all about, and tell you how, where, and when you can get in on the action.

The Live Dealer count in New Jersey has now stretched into double digits. Golden Nugget was the Live Dealer pioneer in the state, partnering with software provider Ezugi to open the first dedicated legal Live Dealer studio in 2016. GN-licensee Betfair, who has since transitioned to FanDuel Casino, followed suit, leasing out space from the facility for its own operation the following year. While a separate company, FanDuel utilizes the same dealers and most of the same tables as Golden Nugget.

The opening of the Hard Rock AC finally brought some competition for Golden Nugget. Hard Rock teamed up with international Live Dealer industry-leader Evolution Gaming to build its own dedicated studio inside the property. Hard Rock got its Live Dealer games up and running soon after it launched its online casino, and later welcomed 888, Play SugarHouse, Mohegan Sun, and Resorts into the facility as well. Even sports betting giant DraftKings has now added Evolution’s games to their app, expanding into casino gambling for the first time in the NJ market.

Notably, each Live Dealer studio is typically open from around 11am – 3am (with a few exceptions). However, this can change, so we recommend checking directly with the Live Dealer site of your choosing for the current hours of operation.

Live Dealer games from these operators are currently available for PC, Mac, and on Android/iOS powered smartphone and tablet devices.

What are Live Dealer games?

Until recently, the only way to experience online casino table games was to play against a computer. Digital table gaming relies heavily upon what is known as a random number generator (RNG), which is essentially a piece of code that produces unbiased and random outcomes.

In short, whenever it is man v. machine, all game outcomes are determined by the RNG.

Although this mechanism allowed games to move swiftly, the social interactivity that players enjoyed in live environments was lost. That, and the RNG-driven nature of the game drew skepticism from some.

Even today, despite regulatory safeguards instituted by legal NJ online casinos to ensure game integrity, some players still only trust an actual deck of cards.

For online players longing for these lost aspects of live casino gambling, Live Dealer provides a near perfect solution.

Live Dealer is made possible by advances in streaming technology. The games are broadcast in real-time from a dedicated Live Dealer studio and feature:

The main differences between playing live at a casino, and in an online Live Dealer game are that there are no physical chips to contend with, and payouts are handled automatically by computer systems. This allows for gaming rounds to move at a quicker pace compared to live play, but still slower than traditional online table gaming.

Of course, the other difference is that players can play Live Dealer games from anywhere. Whether it be from their home PC, a laptop, or a mobile device, as long as players are physically located in the state of the New Jersey, they are free to take a seat at the Live Dealer tables.

What are the advantages and disadvantages of Live Dealer play?

At present, all Live Dealer Casinos feature four primary Live Dealer games: blackjack, roulette, baccarat and hold’em-style games. A variety of baccarat and blackjack side games are also available, as is Multiview Roulette — which is really just roulette with a few extra camera angles.

Each site supports just one baccarat and one traditional roulette table, and that’s all that is necessary. One of the benefits of Live Dealer is that for most games, one table can theoretically host an infinite number of patrons. Blackjack is different because players are active participants. Everyone receives a unique hand, thus seating is generally limited to just seven players per table. The two studios have each employed their own solutions to this limitation. 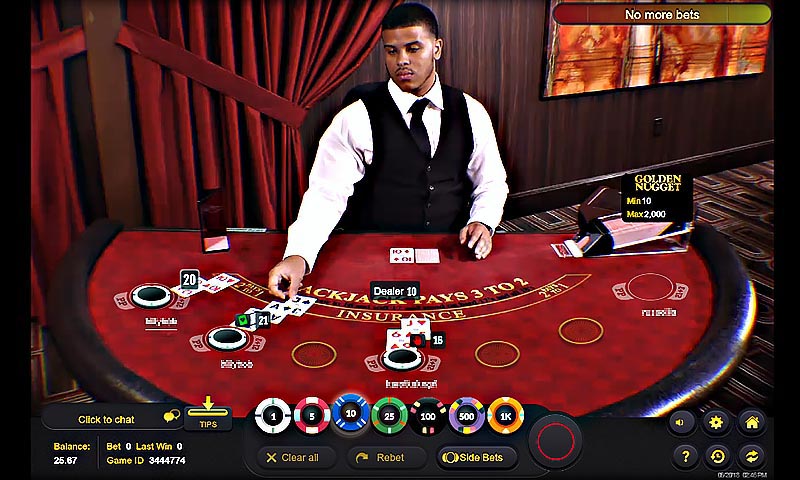 Upon taking a seat at a Live Dealer Blackjack table, players will notice a vast number of similarities to a blackjack game that might take place at a brick-and-mortar venue. Really, the only notable differences are:

As far as the rules, they’re just about as player-friendly as those found on Atlantic City casino floors, and slightly less favorable when compared to most of the state’s online casinos.

There are also two side bets available: 21 + 3 and Pair bets.

21+3 pays out when the player’s first two cards and the dealer’s up card make a flush or better. The Pair sidebets varies slightly between Ezugi and Evolution games. Evolution Live Blackjack has an Any Pair sidebet that pays if your cards match rank, with a better payout if they are the same suit. Ezugi’s version has Perfect Pair, which adds a middle payout level if the pair is a matching color.

As Live Dealer has grown in popularity, there has been increased demand for blackjack. Ezugi’s response has mostly been to increase the number of tables as they go. However, that couldn’t continue indefinitely. In response, Golden Nugget launched a Live Unlimited Blackjack variant with auto split that’s designed to alleviate traffic by allowing an infinite number of players at one table. It can accomplish this task by eliminating some player choices in favor of automatic rules.

Hard Rock realized the conundrum before launch, so Evolution built into their Blackjack game a unique solution to avoid overcrowding from the very beginning. This took the form of the Bet Behind feature, which allows both players on the rail and those seated at the table to bet on other players’ hands. The one potential downside is that players will have to trust their horse to make sound playing decisions.

Both these solutions essentially eliminate the frustration associated with not finding a seat in the main game by limiting control in different, minor ways. Choose wisely.

The differences between playing Live Dealer Roulette and roulette at a live casino are nominal. Namely, players won’t be butting elbows with their table mates trying to place bets because all betting is handled electronically.

But what players gain in convenience, they lose in house edge. That’s because the wheel features a zero and a double-zero. When the ball lands on these numbers, even money bets do not return any portion of the wager. As a result the house edge on all wagers is a rather unfavorable 5.26%.

Compare this to the European Roulette variants found on most NJ online casinos, where the house edge is 2.70% or even less depending on the type of wager.

Still, players won’t find roulette games in AC where the minimum wager is just $1. So if you’re adamantly opposed to digital roulette games and want to play on the cheap, Live Dealer Roulette isn’t the worst option.

For a more visual experience, players are Ezugi-powered casinos are encouraged to check out the recently added Multiview Roulette. The game mostly parallels Live Dealer Roulette (same dealer, hours of operation, and wheel) except that players are treated to more cinematic camera angles.

Live Auto-Roulette tables are also available, and are typically running 24/7. The wheel spins automatically without being facilitated by a croupier. It’s not the most personal of live games, without the human touch, but the wheel is always spinning. 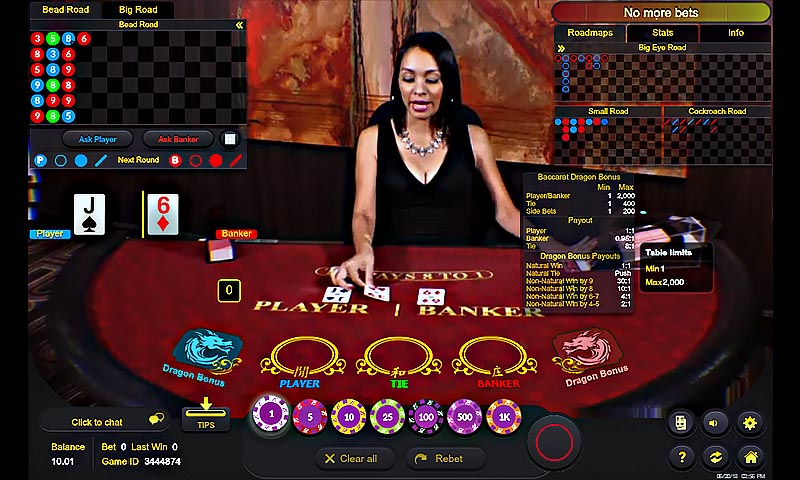 Outside of the ability to peel the cards oneself, Live Dealer Baccarat is just about identical to its brick-and-mortar counterpart.

Well, there is one other big difference: there aren’t many places in the U.S. where players can legally see baccarat hands for a minimum of just $1 per hand.

The version of baccarat spread at Live Dealer tables is the commission variant, which adheres to the following structure:

The commission on Banker wins is taken because the Banker has a slightly higher probability of winning than the Player. Contrary to popular belief, baccarat outcomes are not truly a coin-flip.

Various side bets are available, though they only hurt the expected return which is close to 99% with ideal play.

Finally, poker enthusiasts may get a kick out of the Live Dealer poker games. Numerous Live Dealer games are available, depending on the studio. Casino Hold’em is offered on the Golden Nugget studio/Ezugi side, and Ultimate Texas Hold’em and Three Card Poker come from the Hard Rock studio/Evolution. 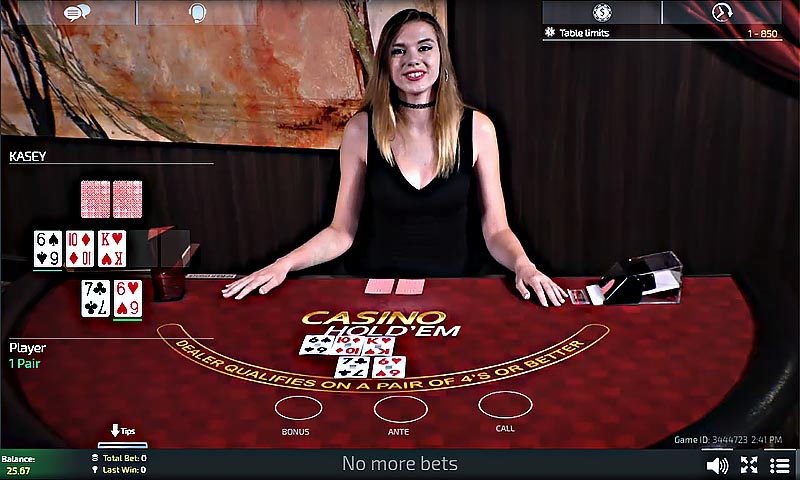 Put simply, the goal of Casino Hold’em is to make a better five-card poker hand than the dealer. Players place an Ante bet before each round and receive two hole cards. After three of the community cards are dealt the player must either fold and forfeit their Ante, or call and double the bet. After calling the remaining two community cards are dealt and a winner determined.

Beat the dealer when she qualifies with a pair of 4s or better and win both the Ante and Call wagers. Should the dealer not qualify then calling players will automatically win on their Ante bet, whether they had the winning hand or not.

The game can be played by an unlimited number of players as the player hole cards are shared by all. The minimum bet is $1. The house edge for Casino Hold’em is just over 2%, making it a better play than most Roulette games. There is also a AA+ side bet option that pays when the player flops Aces or better, which has a 6.26% house edge.

Evolution’s Ultimate Texas Hold’em functions very similarly to Casino Hold’em. In both games you are making the best five-card hand out of two hole cards and five community cards, comparing to the dealer’s hand. The difference lies in the betting sequence and payouts.

The Ante bet pushes if the dealer does not qualify with at least a pair. Blind bets payout high amounts based on the hand, but only with a straight or better. The Play bet pays a simple 1:1. There is also a Trips side bet that pays out on a hand of at least three-of-a-kind.

This casino poker game compares simple, small hands between player and dealer. An Ante bet is made, and you receive three cards. Based on confidence in your hand you can either make a matching Play bet or fold your Ante. The Ante bet pays if you either win or the dealer does not qualify with at least a Queen high. The Play bet only pays if you win and the dealer qualifies, if you win and the dealer has not qualified this bet pushes.

Ante bets pay a bonus for good hands. There are also two side bets that offer other scaled payouts for strong hands. A Pair Plus pays if you have a pair or better, and a 6 Card Bonus pays on the best five-card hand, combining your cards with the dealer’s.