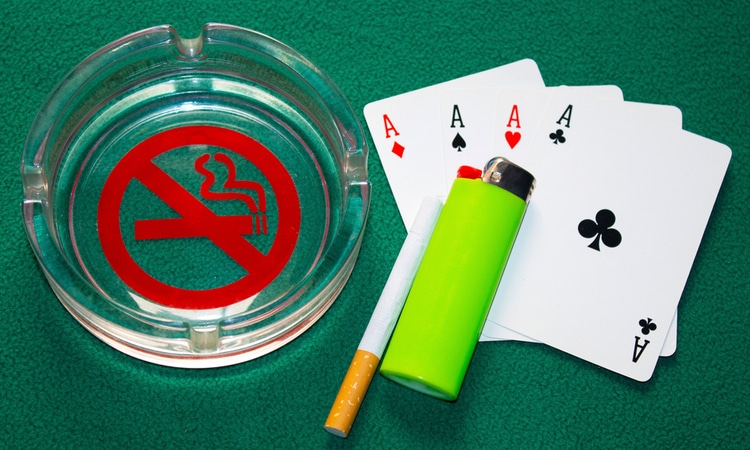 A trio of Atlantic city casino workers told media in Las Vegas Tuesday that they knew little to nothing about politics before becoming active in a campaign to ban cigarette smoking at their places of employment.

But now, they say, they are aware that even with Gov. Phil Murphy’s support, there will be no such ban unless they also can win over state Senate President Stephen Sweeney. That’s because the Gloucester County Democrat blocks bills he doesn’t support from getting even a committee hearing, much less a full vote of 40 state senators.

“As of now, Senator Sweeney is sticking to his opinion” that banning smoking at the nine casinos could cause financial harm, layoffs, or even bankruptcy, she said. “He’s being hard about it.”

But the casino employees hope to convince both Sweeney and the general public that banning smoking in all public spaces except casinos is illogical, and that it puts countless workers at risk of contracting cancer and or suffering other harmful health effects from second-hand smoke.

“There’s an unreasonable choice that too many gaming employees are forced to make every day — and that’s the choice between their health and a paycheck,” said Cynthia Hallett, CEO of Americans For Nonsmokers Rights. “Their lives are more important than a few points on a balance sheet.”

Vitola said she has worked as a dealer in Atlantic City for more than 20 years.

“Working has been fun and exciting, and I have enjoyed it,” she said. “Little did I know when I started, that with the game of chance I was playing with my customers, I also was playing with my health. I dealt with the smoking quietly, even through two pregnancies and constantly if any damage was being done to my two unborn children.

“When I think of the blatant disregard for heath, I am doing this not just for my health but for employees who are afraid to lose their jobs,” she added. “It’s time for state officials to stand by their citizens, and close this loophole.”

Lamont White, who said he has been a table games dealer in Atlantic City for 36 years, said he attended a rally on the issue in June and was disappointed at how few of his colleagues attended.

“The turnout was weak, in my opinion,” White said. “Then Governor Murphy said that smoking was coming back on July 4, and that pissed me off. It woke me up. I couldn’t believe that after a year of fresh air, the smoke was coming back.

“Maybe I’m naive, but I think politicians are people and they have hearts, too,” said the father of two and grandfather of four.

White said he created a Facebook page protesting smoking in casinos, and the group now has more than 1,900 members.

Peter Naccarelli, a 25-year veteran of the industry, said he began working at a casino at age 18.

“This business supports my family, but I worry that this business is slowly poisoning me,” said Naccarelli, who also has two sons. “I have to work at tables with five people, who are sitting less than three feet from me, are blowing second-hand smoke directly in my face.”

Each worker recounted anecdotes of colleagues who they said have taken ill — or even died — at relatively young ages.

A call to arms for Nevada casino workers, too

The cross-country trip to Las Vegas to air concerns during a major gaming industry event also was designed to encourage the group’s counterparts in that city to begin their own grassroots efforts to ban smoking there.

Organizers of the press conference had hoped to have Las Vegas casino workers speak as well, but they said fear of workplace retaliation factored into a lack of success on that front.

“To the casino workers here in Nevada, we want them to know that there is strength in numbers, and you don’t have to accept the status quo,” Vitola said.