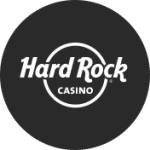 Hard Rock Casino NJ
76
* Please note - Our star ratings are based on our personal opinion of the gambling sites we work with. We also take customer feedback into account in our rankings.
50 FREE SPINS + $1,000 MATCH

Get your Fenders out and start brushing up on your scales, because one of the most recognizable restaurant, hotel, and casino brands the world over has set up shop in Atlantic City.

Hard Rock Hotel & Casino AC opened its doors on June 28, 2018, replacing the shuttered Trump Taj Mahal. Alongside the grand opening of the brick & mortar facility, Hard Rock launched its own branded online casino site. From the looks of it, Hard Rock is taking online gaming just as seriously as its land-based casino.

Hard Rock currently offers new players a 100% match bonus up to a $1,000 on their initial deposit + 50 Free Spins. Just follow the links on page to get the maximum bonus.

What are the advantages of Hard Rock Online?

What are the disadvantages?

On which platforms is Hard Rock Online available?

It really doesn’t matter how hard rockin’ an operator’s online plans are unless it locks up a solid software provider, which can offer its product across a variety of platforms. In SG Digital, Hard Rock online casino has found just that.

SG Digital is known for its lightning quick browser-based client, and Hard Rock online casino has not deviated from that norm.

The interface dazzles with eye-catching graphics and features not often seen in the NJ online casino market, such as multitable play for slots and casino games and a sophisticated loyalty point tracker. This is in addition to the standard account management features and a full cashier. It is compatible with a wide variety of browsers including Google Chrome, Safari, Mozilla Firefox, and Edge.

Aside from NetEnt, other major game providers are onboard such as big players IGT.

An online casino without a top mobile app is like a stratocaster without strings. Therefore, it was nearly without question that Hard Rock would offer a fully functional casino app, compatible with iOS and Android powered devices.

Today’s casino apps are no longer just cheap knockoffs of the real thing, offering a portable experience that’s as responsive and feature-rich as any desktop client. The main difference between Hard Rock’s mobile and desktop options is that on mobile there are slightly fewer games. But thankfully most of the key options are there, including the Live Dealer games and the new progressive jackpot slots. 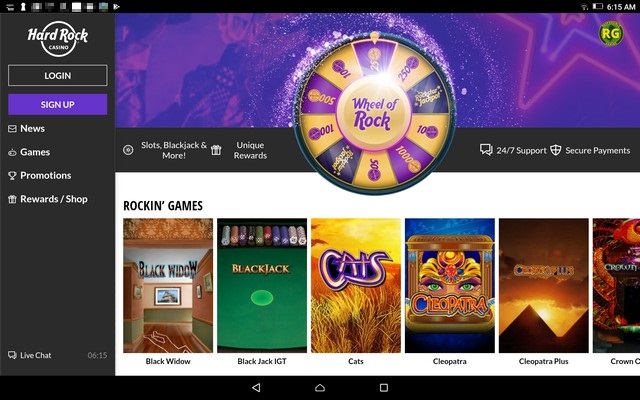 The average NJ online casino site has somewhere between 300 – 400 games, with the most ambitious sites featuring over 500+. Hard Rock has done a lot of catching up: it launched with a conservative library of less than 200 games, though this has improved quickly and is now over 500+.

Thanks to Hard Rock’s continued expansion it has a formidable enough selection to be competitive, and if things continue it may even wind up with one of the top libraries.

Slots are undoubtedly one of the main features on Hard Rock online casino, with titles running the gamut from old favorites like Triple Diamond and Quick Hit Platinum, to musically themed video slots with Jimi Hendrix, Ozzy Osborne, and Guns N’ Roses.

Very high value slots such as the Jack Hammer and Blood Suckers series are also present.

Among its jackpot slots Hard Rock features the widely popular progressive Divine Fortune or NetEnt’s unique Mercy of the Gods, both of which offer players the chance to win life changing jackpots on the regular. Additionally, Hard Rock has also recently added progressive “Mega Jackpot” versions of classics Cleopatra and Siberian Storm with potential prizes over $500,000.

Hard Rock made a bold move to go “live” with Live Dealer games nearly out of the gate.

Since Live Dealer has proven such a boon for Golden Nugget Casino, which was first to market with the product, Hard Rock partnered with Evolution Gaming to construct a Live Dealer studio on the Hard Rock AC casino floor sometime in August of 2018. Evolution already provided Live Dealer games for sites abroad, so they’re well-versed in the practice. Shortly after several other NJ online casinos entered into agreement to host the same Evolution games played out of Hard Rock AC.

This move was essential for Hard Rock online casino to try to get a leg up on the competition, some of which has been rooted in NJ for nearly five years. Live Dealer games so soon after launch was an aggressive attempt to get the attention of players. 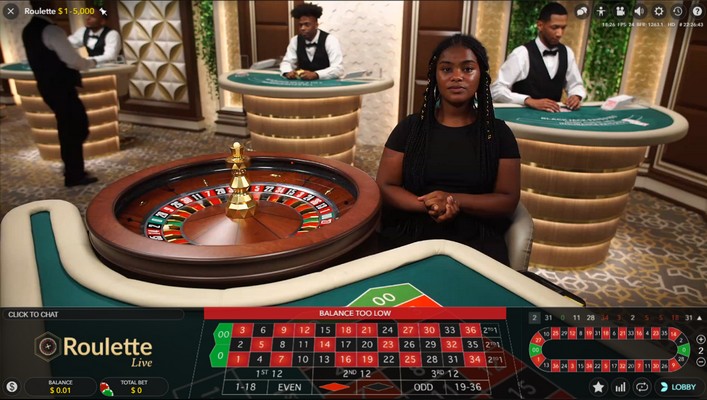 Tables are available from 11AM until 3AM. Thus far Evolution offers the following games on Hard Rock online casino:

Blackjack and roulette games are both currently available at Hard Rock.

Aside from Live Dealer, Hard Rock features an attractive variety of Blackjack variants, including Blackjack Xchange and First Person Blackjack. These boast RTPs just over 99.5%. 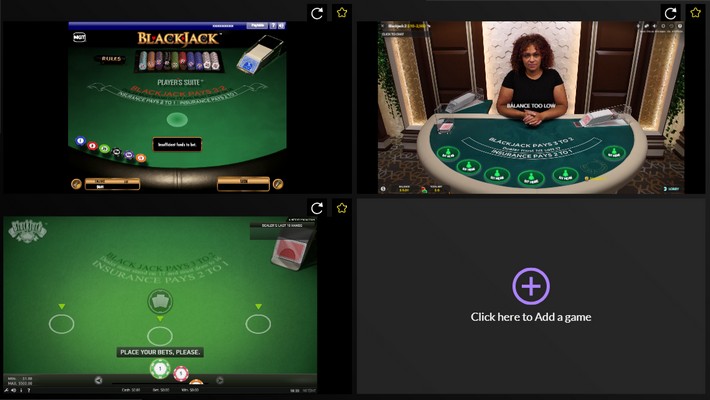 Two games in addition to the one Live Dealer roulette option reside at Hard Rock:

Unfortunately there is no option for the coveted French Roulette style game. While French roulette is a rarity in New Jersey online casinos it still could hopefully be added to Hard Rock’s library in the future.

Hard Rock does not yet have any craps games. There are a few varieties of baccarat available, including the live dealer game mentioned above and a few variants. However, more table games such as these and even “carnival” style casino games may be added as the library expands. Going further, it’s not implausible for Hard Rock to offer games rarely (or never) seen in the market, like Red Dog, or the Perfect Pairs side bet for Blackjack.

Hard Rock has not introduced any unusual or exclusive new variants of Video Poker, but boasts a solid variety of well-known titles.

These boilerplate options have remained unchanged for decades and still represent the best of the genre. Players can expect returns hovering around 99% or higher, and are able to play a hand for as little as $0.10 and still receive max odds on Royal Flushes.

Other possible future game formats include Slingo, which is rapidly gaining popularity on NJ online casino sites may also be forthcoming.

Given its aggressiveness and supposed commitment to the NJ market, anything seems possible.

Hard Rock is a bit of an anomaly in that its brick & mortar casinos don’t all offer the same player rewards program. For instance at its Las Vegas hotel, the scheme is a four-tiered program called Backstage Pass, while players in Florida will be treated to the two-tiered Seminole Wild Card. Players visiting Hard Rock Resort and Casino in Biloxi will find that the loyalty program is called Encore Club. And so on.

In New Jersey, users on the Hard Rock app or site can earn points towards the Wild Card Rewards program offered in Atlantic City. Members will be treated to the following amenities, with higher tier members receiving greater benefits:

The land-based program is connected to the online one, similar to how Caesars’ affiliated online casinos connect Caesars Rewards.

What cashiering options are available?

Getting money on and off a NJ online casino is hardly the chore that it was a few years ago. Hard Rock offers a bevy of industry standard depositing options like:

Many of the aforementioned options are available for withdrawals as well, pending they were used for at least one successful deposit. In addition, be on the lookout for paper checks through the mail.

Great customer service is the cornerstone of any successful business. No one knows this better than Hard Rock, which operators dozens of cafes and casinos throughout the world.

You can access service agents by the following vehicles:

Email responses should take no longer than 24 hours, and players utilizing the Live Chat service receive answers within minutes. All of these services are available 24/7 .

Hard Rock has had eyes on the New Jersey gaming market for years. In fact, this is the third time in the past decade that it’s issued plans to open a casino.

The operator’s journey began in 2010, when it revealed plans to open a boutique hotel (less than 500 rooms) and casino on the Atlantic City boardwalk. Construction was poised to begin in 2012, but the combination of a poor economy, crumbling casino revenue, and increased competition led Hard Rock to quietly pull the plug.

Hard Rock’s next attempt to get something going in New Jersey came in 2015. This time around, the plan wasn’t to build in struggling Atlantic City, but to look north to the Meadowlands. Given the Meadowlands prime position near NYC and the most populated areas of New Jersey, Hard Rock CEO Jim Allen saw a booming opportunity for the right casino to generate even more revenue than the Borgata.

Hard Rock went so far as to unveil its plans for the first NJ casino to exist outside of Atlantic City.

Unfortunately, voters weren’t too keen on bringing casinos to the north. A voter referendum to break AC’s monopoly on casino gambling failed by historic margins, and the issue was quickly put to bed.

Opportunity arose once again in 2016, and this time Hard Rock capitalized. It was in October of that year that the much maligned Trump Taj Mahal closed its doors. Interestingly enough, the attached Hard Rock Cafe was the only component of the old Taj to remain open.

Just a few months later in March 2017, Hard Rock International announced that it purchased Taj for the bottom barrel price of $50 million (it had cost over a billion to build in 1990).

Of course, it would have to invest in rebuilding the dilapidated property. In April 2017, an ambitious $375 million renovation project was announced. That number rose to $500 million.

Just over a year after announcing its plans, Hard Rock provided anxious casino goers with an official launch date: June 28, 2018. The launch announcement was accompanied by the booking of dozens of high-profile music and entertainment acts.

Now open for business, Hard Rock consists of a 2,000 seat theater, 160,000+ square feet of gaming space (2,000+ slots, 100+ table games) and more than 2,000 hotel rooms, rendering it one of Atlantic City’s largest casino venues. Users can get online with Hard Rock Casino and bet on casino and sports for real money today!

Hard Rock Casino Verdict
Bottom Line
Hard Rock online has come a long way from its 2018 start, adding a huge variety of slots and especially table games. It has even included a few exclusive innovations, like Live Casino, which allows players to control real slots and table games inside the physical casino. Hard Rock is definitely an online casino you want to check out.
The Good
The Bad
3.8
Overall Rating