Gamblers Think Gov. Cuomo, Long A Roadblock To Mobile Sports Betting In NY, Is 50-50 To Resign

As of Tuesday morning, prediction market gamblers see Gov. Andrew Cuomo's remaining in office by year's end as a 50-50 bet.

New York Gov. Andrew Cuomo is on the rocks, facing a growing number of sexual misconduct scandals — or just one massive one, if you want to look at it that way. He’s also in hot water for part of his COVID-19 response.

We’ll spare you all the details of the scandals here, as you can Google for yourself. But we’re here to report that some people are putting their money where their speculation is on the gambling website PredictIt, which allows relatively low-stakes (really mid-stakes) betting on political events. It’s a legal platform in the U.S., as the federal government gave it an exemption for “research” purposes.

As of Tuesday morning, gamblers pegged Cuomo as a slight favorite to finish 2021 in office. Late Monday, shortly after a new accusation against the governor surfaced, he fell as low as 43 cents (43% implied probability) to remain in office through the rest of the year. Many people decided to sell their shares at that point. At last look, it was effectively 50-50 in the minds of bettors. 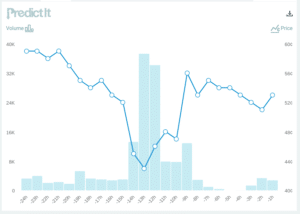 The market has 340,000 shares worth of liquidity. A share is worth $1 whenever the market is resolved.

The market opened on Feb. 25 with “yes” shares at 72 cents, so it’s been a rough week for the governor. There are mounting calls to resign, even from his own party, but there’s a lot of high-level analysis out there that says Cuomo can weather the storm. Just look at Texas Sen. Ted Cruz as a recent example.

Another wrinkle to this story is that Cuomo has long been a roadblock to online sports betting in his state, which has helped keep New York betting dollars flowing into New Jersey. His resignation would install Lt. Gov. Kathy Hochul at the top of the food chain in Albany. While it’s unclear what that would mean to the sports betting efforts in the near term, it’s hard to imagine that Cuomo’s departure would be bad news on this front.

He recently pitched a tentative plan to limit the mobile sports betting market to as few as one or two operators, regulated by the state lottery. It’s a controversial idea. That would be in stark contrast to neighboring New Jersey and Pennsylvania, which allow numerous brands in partnership with retail casino properties. Those markets aren’t truly open in the sense of letting an online sportsbook operate as a standalone business without a casino partner, but compared to what Cuomo is eyeing they are competitive markets.

The monopoly-like model proposed by Cuomo could be challenged in court by various New York gaming stakeholders that would be losing out.

If Cuomo, who is up for re-election in November 2022 (assuming he survives this scandal stretch), were to depart now, it could allow a sort of reset on the mobile sports betting issue.