The first running of the Online Circuit series on WSOP obliterated any expectations, proving players will show up if properly incentivized.

While the WSOP bracelet may be the slab of hardware most commonly associated with poker greatness, circuit rings are also held in pretty high regard. This has proven true time and time again in the live poker tournament arena, and now online.

Over the past two weeks, WSOP.com took a flyer on a first-of-its-kind Online Circuit series, consisting of 13 events with each one awarding a coveted Circuit Ring to the winner. The total guarantee for the series was set at a relatively modest $692.5k — a benchmark that was subsequently smashed to bits by nearly $1 million.

That’s right, WSOP.com, which only supports players located in the states of New Jersey and Nevada, just wrapped up a series awarding $1.645 million across just over a dozen events, signaling that tournament poker in the legal U.S. online space is alive and well, as long as there is some piece of prestigious hardware involved.

Compared to what is observed in international markets, $1.645 million doesn’t sound like a massive prize pool. But it’s all about perspective. Fact is, most operators conducting business in the difficult legal U.S. market have trouble generating $1 million prize pools, and that’s even if the wealth is spread across 30 or 40 events.

Even the braintrust over at WSOP.com probably didn’t expect the Online Circuit, which also awarded two $10,000 seats to the 2018/19 Global Casino Championship, to do this well. Admittedly, tournament guarantees are mostly a marketing device, but they do offer a loose indication of how an operator expects a series to perform. In this case, WSOP.com was way off the mark, as every event outside the Main more than doubled its guarantee. Four events at least tripled it. 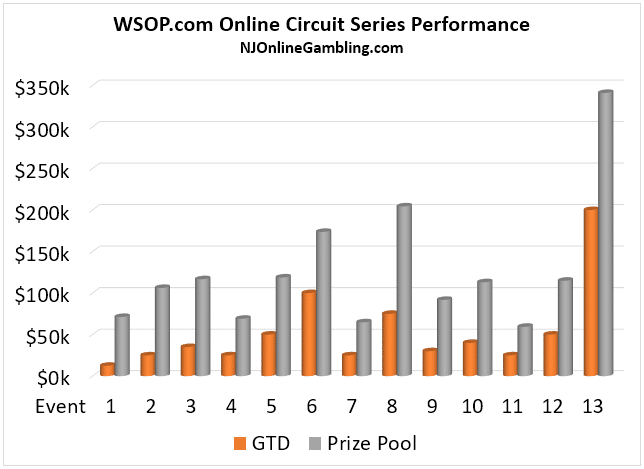 In terms of relative performance, the best comparison points we have are the two Coast 2 Coast tournament series hosted by WSOP.com, with the first running just shortly after 888-branded sites in Nevada, Delaware, and New Jersey began sharing liquidity, and the second having wrapped up in August. Both series marked high points for WSOP.com, as the first Coast 2 Coast series sailed by its $1 million guarantee by just under $400k, and the second ($1.1 million) performed nearly as well, despite running in the dog days of summer.

Yet while both of these series boasted comparable prize pools to the Online Circuit, they were spread across far more events (32 and 36, respectively). By comparison, the compact Online Circuit series averaged over $126.5k per event, far and away the most of any online poker tournament series in the history of the legal U.S. industry.

On the flip side, the massive prize pools for last summer’s four online bracelet events made those for the Online Circuit events look like chump change. This doesn’t surprise however, as not only were there only four online bracelet events, but they were held smack dab in the middle of the live World Series of Poker at the Rio — otherwise known as rush hour for online poker.

The last time WSOP.com tried to run a tournament (that didn’t award a bracelet) with a guarantee of $200k or more was during the Coast 2 Coast II, which featured a Main Event affixed with a $250k GTD. It was a disappointment, with WSOP.com eating a hefty $27.5k loss on the event. The $200,001 GTD Coast 2 Coast I Main Event made a better impression, attracting 526 players in creating a $245,642 prize pool, but that was still small potatoes compared to the Online Circuit Main.

That event offered the same $200k guarantee as the Coast to Coast I (minus a dollar), but generated a hefty $341k prize fund — the most of any $200k+ GTD (again, that didn’t offer a bracelet or ticket to the Main Event) since legal stateside online poker sites opened their doors to the masses in 2013.

The series High Roller also performed extraordinary, generating a staggering $204,370 prize pool, which — and forgive us for sounding like a broken record — was far and away the best performance of a $1k buy-in event in the legal U.S. market that didn’t award something you could slap around your wrist.

Even the sole PLO event impressed, blowing away its $25k prize pool ($59.4k) and lending credibility to the notion that mid-stakes players do enjoy games with more than two hole cards.

What (else) did the Online Circuit do right?

The obvious attractiveness of “ring bling” aside, the Online Circuit series illustrated a renewed focus by WSOP.com. Instead of trying to appeal to players of all walks, the buy-in amounts, which ranged from $215 – $1,000, targeted the same player types that might be inclined to play live circuit events: mid-stakes grinders.

Highlighted low buy-in events haven’t worked out so well in the NJ/NV online poker markets, probably due to there being a very limited pool of players. Ponying up 10 or 20 bucks to play for five- and six-figure prize pools, like one can internationally, is appealing. Buying in for the same amount to play for a top prize of $500 or $1,000 — not so much. By hiking up the average buy-ins, but not to the point where they proved unaffordable, WSOP gave its player base a meaningful amount of money to play for. And by reducing the number of events to just 13, player bankrolls weren’t spread too thin.

It’s also worth mentioning that the scheduling of the events was spot on, with one event running daily at 7 p.m. EST on weekdays and Saturdays, and one at 5 p.m. on Sundays. The timing allowed most working players from NJ the chance at WSOP gold, while still not being too early for Las Vegas grinders. Events typically met their end between 1 a.m. and 3 a.m. on the East Coast, which isn’t early, but a far cry from what we were seeing during the online bracelets, when events were extending to mid-morning. The scheduling worked.

Given the success of the series, we expect WSOP.com to favor leaner, more compelling tournament series in the future. Will we see another Online Circuit series? Most definitely, and by the time it runs again, there’s a firm possibility Pennsylvania will be part of the mix, making for what could be a $3 million+ prize pool.