WSOP.com has vastly expanded its online bracelet schedule in 2019, a trend that could lead to a shakeup on the all-time WSOP leaderboards.

Entering this summer, there were nine online bracelet events in WSOP.com history, dating back to 2015. The WSOP decided to double the all-time tally with nine events just this summer.

The previous nine online gold bracelet events awarded $10,002,326 in prize money. This figure doesn’t include a slew of non-bracelet tournament events that WSOP.com hosted during the live Series at the Rio.

Ten percent of the entire 2019 WSOP schedule is over the internet, a staggering percentage given the lackluster status of the Nevada/New Jersey online poker market during the rest of the calendar year. The WSOP has made an even bigger commitment to its online platform this summer, which comes ahead of an expected Pennsylvania online poker launch.

A potential problem is that there are now 89 bracelet events, which naturally reduces the prestige of winning one. With that said, it does make the race for bracelets more interesting, and some of the guys at the top are now more vulnerable to being passed on the all-time bracelet list.

A bracelet for an online event, on paper, is the same as winning a live event in the sprawling rooms of the Rio Convention Center. You get an authentic, tangible gold bracelet for winning an internet tournament, just like you do for taking down a brick-and-mortar contest.

The record for bracelets in a single summer is three (accomplished on several occasions), and that all-time mark could be at risk of falling in the years ahead, assuming the WSOP keeps growing.

Online bracelet schedule kicked up a notch … or two

With that said, you don’t get the indirect business (food/beverage and shopping) from poker players if they don’t come to the Rio to play, but the WSOP is already jammed packed with live events. It’s much easier to expand the schedule via an online component rather than through more live events.

“Just like the land-based WSOP, the annual summer series is also the best time for online poker players in the US to chase big prize pools and WSOP gold bracelets,” Bill Rini, the WSOP’s Head of Online Poker, said in a statement when the schedule was announced. “WSOP.com is offering a consistent gold bracelet schedule this year, plus nonstop satellites to both the online and live events, giving players the best opportunity to participate in the 50th annual WSOP.”

The WSOP made the starting times consistent, and most of the events are on Sundays, a day that online poker players are accustomed to for finding larger prize pools to compete for. There will be an online bracelet event every Sunday during the series. The WSOP runs seven weeks, so with nine online events, there will be two Wednesday online gold bracelet events — June 19 ($500 Turbo Deepstack) and July 3 ($3,200 High Roller).

“After shattering (its own) records for the largest U.S. online poker events of the year in 2018, WSOP.com believes a consistent schedule – same day and time each week – will lead to even bigger online gold bracelet events this year,” the WSOP said in a statement.

All starting times are PST.

Check it out below: 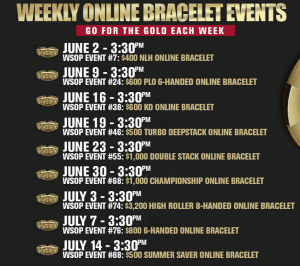 The best gauge for looking at what the online events could generate in terms of prize pools is a look back at previous summers. WSOP.com held its first online bracelet event in 2015, with a single event in 2016, three in 2017, and then four in 2018. The WSOP kicked off liquidity sharing with Nevada and New Jersey in May 2018, just weeks before the WSOP in Las Vegas kicked off. New Jersey players were allowed to participate in all four events that year.

In January 2019, the federal government issued a legal opinion on the Wire Act, calling into question that liquidity sharing arrangement.

“Eligibility for New Jersey players in WSOP.com online gold bracelet events has yet to be determined,” the WSOP said in February. It wasn’t the most reassuring situation for poker players, with The Department of Justice saying that the new Wire Act opinion could be enforced starting June 14. As such, New Jersey players will only be allowed to participate in online events taking place prior to that date — just two out of the nine.

Here’s a look at past online bracelet results:

So what are the expectations for this year?

The $1k no-limit hold’em flagship event has been a staple since the online bracelet events began, and the number of entries continues to grow. The field was up 24% in 2018, despite an additional online bracelet event in the equation. Whether turnout for that championship event will grow at a comparable rate in 2019 remains highly questioably, especially with New Jersey out of the equation. Last year, New Jersey players comprised roughly 10% of total entries for the $1k.

WSOP.com is equipped with a multitude of satellites for all the online bracelet events, so the website has ways to help make sure players are qualifying for the online championship.

In addition to the $1k buy-in, the high roller event and the lower buy-in hold’em event were both up in 2018, showing that there is plenty of room for more online bracelet events.

In our opinion, the online bracelet event schedule will likely be a success, in terms of turnout and prize money awarded, especially for events where NJ participation is permitted.

The major concern is about dilution of the bracelet, but that has been ongoing for years and it’s probably a solid long-term strategy for the WSOP.

For years, legends like Doyle Brunson, Johnny Chan, and Johnny Moss have sat near the top of the all-time bracelet list. If the WSOP keeps growing its schedule, mostly through online bracelet events, those names will soon slide down the ladder. It’s actually pretty good for the game of poker, injecting some fresh excitement into a casino offering that has struggled, relative to other casino games, across the country.

It’s a safe bet to assume that if everything goes well with nine online bracelet events in 2019, there will be more in future years.