Ocean online casino has gone live with a first-time deposit bonus that looks great on the surface, but is inundated with fine print.

When Ocean online casino launched last week, the value hunter in us was admittedly curious.

It wasn’t the games, the tie-ins to the newly-minted Ocean Resort Casino in Atlantic City, or the promise of a VIP program that piqued our interest — they were at best par for the NJ online gambling industry. No, it was a banner smack dab in the middle of the main lobby that promised a $10,000 first deposit bonus to new players.

Ten-thousand bucks — that’s four times greater than the $2,500 welcome bonus offered by Betfair Casino, previously the industry’s largest. Knowing full well that Ocean was not simply going to hand that amount of cash to new patrons on a silver platter, it was time to investigate the terms.

After some meticulous research (this is a complicated offer), we conclude that outside of that outrageous monetary cap, the package is a very mixed bag. We’d even go so far to actively encourage select player groups to steer clear.

One bonus in ten unequal parts

We actually don’t mind this facet of the promotion, as realistically, how many players are going to fork over $10,000 to a brand new site all at once? Instead, it makes far more sense that they would want to throw a single Benjamin on the site, try out the games, and return with more money should they have a favorable experience. Not to mention, there are payment processors that don’t even allow most players to load that much money in one shot, the popular VIP Preferred (eCheck) method being one of them.

Once a player opts in to the welcome package and makes an initial qualifying deposit of at least $10, they’ll receive the match (again, up to $100) from Ocean online and can commence playing. Three days later, they’ll get an email notifying them that they have unlocked the second portion of the bonus, which is a 100% match up to $200. Claim that, and they’ll become eligible for the third portion of the bonus a few days later, and so forth.

In total, it will take players seven weeks to receive all 10 bonuses. This is an exorbitant amount of time, and credit must be given to Ocean to designing its welcome package in such a way that players are incentivized to remain active on the site for nearly two months. Problem is, players can only claim the next segment of their bonus on the same calendar day on which it is unlocked. This is a very severe restriction that will ultimately result in many players missing out on hundreds, if not thousands, in bonus cash. Forget to check your email one day? Too bad.

Typically, in order to withdraw any winnings from bonuses, players must meet a specified wagering, or turnover, requirement. For instance, a 10x wagering requirement means that players will have to risk $10 for every one dollar of their bonus before withdrawing.

Some sites allow players to convert bonus funds to cash in increments, but Ocean online casino does not. Furthermore, the wagering requirement is set as a very steep 30x, which to our knowledge is tied for the worst clearance rate in the NJ industry. Digging a little deeper, it’s revealed that roulette only contributes 50% to the requirement, and other games like blackjack and video poker, just 10%. So for the average bloke receiving a $100 bonus, they’d have to wager $3,000 on slots, $6,000 on roulette, and a whopping $30,000 on other games to clear the funds. 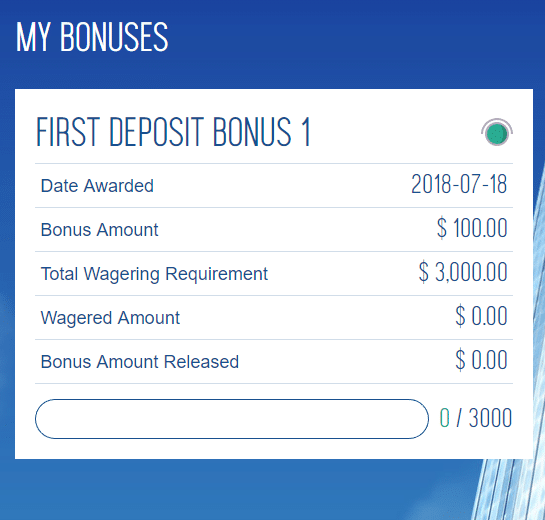 Now it’s worth noting that games like Jacks or Better and European Roulette contribute less than slots on nearly all NJ online casino sites. Reason being, these games offer a much lower house edge than slots, and casinos have to take a countermeasure in order to avoid being exploited by bonus hunters. So we’ll give Ocean the benefit of the doubt there.

One damning caveat for non-slot players

The 30x wagering requirement (3.33% cash back rate) on slots isn’t good relative to industry standards, but it’s not atrocious either, as in theory players would only have to play a slot with a return of greater than 96.67% — of which there are a few — to come out ahead.

The 300x turnover (0.33% return rate) on video poker and table games is less favorable, and made all the worse by a strange stipulation that we haven’t seen anywhere else: All individual bets in excess of $3 while playing with bonus funds will not contribute to the wagering requirement, and any cash won on these wagers will not be eligible for withdrawal.

Say what now? Again, for slot players this isn’t too damning of a caveat, as most players don’t risk much on individual slot spins anyhow. But for blackjack players it’s so bad that we can’t in good faith encourage them to opt in. Think about it: If Johnny receives a $100 bonus, he’ll have to wager $30,000 to clear it, in no greater than $3 increments. That’s 10,000 individual wagers to clear $100, or 1 million wagers (not a typo) to clear the entire $10,000. We’d rather take our chances playing with our own money against the house.

That’s not to say it’s all bad. In fact, components of it are quite good. But for casual players that won’t have the time to wager a bonus 30 times, and especially for blackjack and roulette players who fancy wagering more than $3 on an individual bet, they’re better off shopping elsewhere.