Venerable casino, now more than 40 years old, looks to recapture some of its former glory 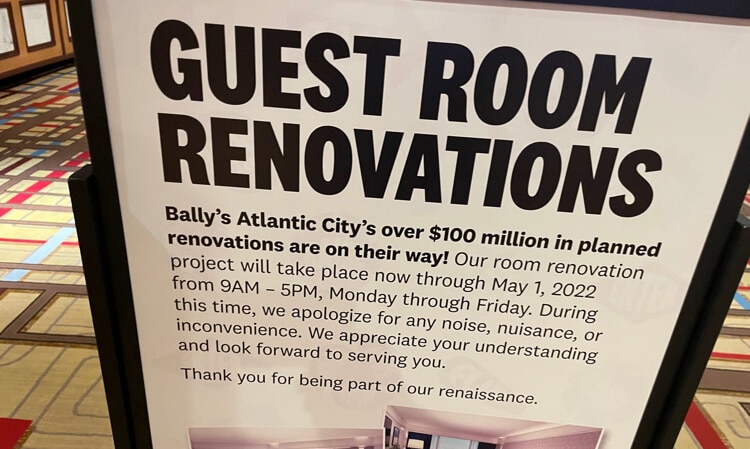 A location on the heart of the Boardwalk, adjacent to Caesars, is an advantage for Bally’s, which opened way back in 1979.

But as executives for the new owner of the casino found after being approved by state regulators one year ago, there is a major disadvantage to overcome at this point as well.

That would be the fact that so many patrons noticed that Bally’s seemed to be the “forgotten casino” in a Caesars Entertainment triumvirate of such sites in the city that also included Harrah’s.

Making matters worse, those executives found that in marketing surveys of Atlantic City gamblers, a number of those who were critical of Bally’s said they had never visited; they just stayed away via word of mouth from family and friends.

During the September 2020 hearing of the New Jersey Casino Control Commission, Vice Chair Alisa Cooper noted the property’s age and reputation. Bally’s General Manager Nick Polcino, who was a Bally’s craps dealer when the property first opened, conceded to Cooper, “The property was depressed. A lot of folks didn’t want to come here because it was dirty. And it was old. And … we’ve seen improvement each time we’ve invested our capital.”

But just to make certain of a new era to come, commission officials linked regulatory approval to a guarantee of substantial investment to improve the casino across the board.

The three-year, $100 million upgrade already is underway, as was evident at NJ Online Gambling’s tour of the property last week.

Hundreds of brand-new slot machines spice up that area, and there is plenty of construction work going on in many of the rooms. A total of 750 rooms with a “lighter and brighter feel” are expected to be renovated, including 112 so-called “corner king rooms” that function as junior suites.

Some rooms will be combined to make 16 penthouse suites, creating an amenity for the most well-heeled gamblers visiting the city.

A “refreshed hotel lobby” designed to make a good first impression is scheduled to feature lobby columns with modern quartz stones and new light fixtures and tiles. Also, a new lobby bar will be constructed adjacent to the casino floor.

Part of an upscale “high limits room” already has been completed as another lure for well-off gamblers — including an Asian and Asian-American clientele that Bally’s is seeking to attract in greater numbers. The other half of that site is expected to open later this month.

One of the first upgrades that Bally’s customers would have noticed was the 4,100-square-foot FanDuel Sportsbook — the brand’s first in Atlantic City — that opened this spring just in time for March Madness college basketball.

The sportsbook has a fresh look and a familiar brand, but it doesn’t quite compare with The Book sportsbook next door at the Wild West casino tower. That facility is more than triple the size of the new Bally’s sportsbook, but when Caesars Entertainment sold Bally’s last year to Twin River, it kept both the casino tower and massive sportsbook for itself as part of Caesars casino.

(Bally’s just rolled out a loyalty card called Bally Rewards, designed to clarify for guests that the site is no longer affiliated with Caesars brand.)

The Jerry Longo’s Meatballs & Martinis restaurant followed with an opening in May, featuring a pair of blackjack tables inside the eatery. Water Dog also opened in the spring, and a new Asian restaurant is in the works for next year as well.

One upgrade still in progress is a new dining establishment in the space formerly occupied by Harry’s Oyster Bar, which closed in late September after a 10-year run.

The current state of Bally’s, locally and nationally

The monthly revenue reports released by the New Jersey Division of Gaming Enforcement routinely show Bally’s as last among the city’s nine casinos. In September, however, while market leader Borgata reported $60.2 million in revenue, Golden Nugget placed last at $12.9 million while Bally’s checked in at $14.2 million.

How high can Bally’s climb?

For 2021, Bally’s has $105.2 million in revenue vs $110.4 million for Golden Nugget and $127.8 million at Resorts. The sixth-place casino, neighboring Caesars, is at $180.4 million — so leading the “bottom tier” probably is the most realistic goal for Bally’s over the next two years or so.

Meanwhile, Bally’s — the former Twin River Worldwide Holdings — currently owns and manages 14 casinos across 10 states, and with a pending closing of the purchase of Tropicana Las Vegas and expected development of a casino at Nittany Mall in State College, Pa., Bally’s tally would grow to 16 casinos across 11 states.

On Friday, Bally’s announced it placed bids for two different downtown Chicago casino sites, while Hard Rock and Rush Street Gaming also joined the fray on that deadline. The Bally’s sites are the Chicago Tribune Publishing Center, located on the corner of Chicago Avenue and Halsted Street, and the McCormick Place Truck Marshaling Yard. The $1.6 billion proposal, if approved, would serve as the company’s “flagship” property, according to Bally’s officials.