Brennan: My Tour Of Eight Atlantic City Sportsbooks In One Afternoon

NJOG Senior Analyst John Brennan visited all of Atlantic City's retail books during game day to see what turnout was like at each property. 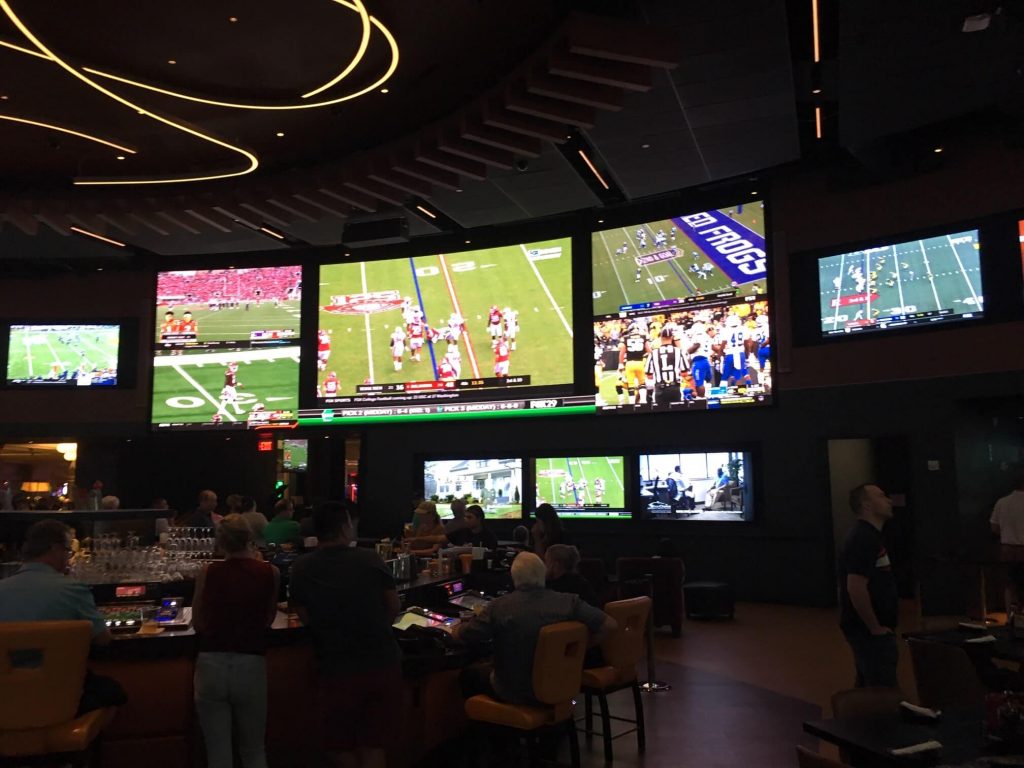 I made it — with two minutes to spare. (It’s tougher than it sounds, as I’ll explain.)

Overall conclusion: If you only recall some of those temporary sportsbooks from last fall and earlier this year, take another look. Most of the books now are spacious and comfy — and at least on this early college football Saturday afternoon, mostly no trouble getting a table or waiting for a bet.

BALLY’S — This one is called “The Book,” and serves both Bally’s and sister property Caesars next door (the only AC casino without its own sportsbook). It’s in the “Wild Wild West” section of the property.

Billed as “The Largest Sportsbook in Atlantic City,” this $8 mm property easily meets that with 15,228 square feet. I’m kicking myself for not noticing the five “private Fan Caves,” available for 16 to 24 people each with a reservation — and equipped with an XBox and table service. 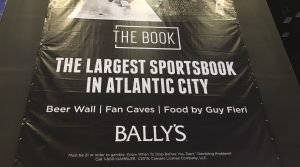 Since the Rutgers-Michigan game had just kicked off, I looked around for a Scarlet Knights fan or two. Wait, there’s what looks a little like scarlet red on one of the mostly male, 35 or so, patrons … no luck. That’s North Carolina State Wolfpack gear.

Not a great sign that while the Oklahoma and Wisconsin games each get a large screen, Rutgers is consigned to a one-quarter box — a fate Rutgers faced in numerous other books on Saturday. But we have seven more sportsbooks to come!

RESORTS — Did not remember this being a 20-minute stroll on the Boardwalk, but the temperature in the 70s made it pleasant enough.

This is a DraftKings partnership, and by 12:30 p.m. this book has 45 patrons — three of them female. At about 5k square feet, this is indeed more modest a spot than Bally’s. But the seats in the main section are quite comfortable.

I didn’t think much of the plus that the sportsbook is so close to the Boardwalk entrance — until I experienced the alternative at some other books.

This rock is a hard place

HARD ROCK — Right next door to Resorts, which is convenient.

But this sportsbook is off the beaten path from the entrance, and feels like somewhat of an afterthought. There are no more than 40-50 seats including a small bar area, and it doesn’t have the feel of being its own space.

A modest point for “The Philly Special” — $10 for a Bud Light and a shot of Fireball.

If you are staying on-site and looking to get in an easy wager before moving on, you’ll do fine here. But if you want to spend the day in Atlantic City watching at a sportsbook with a big “atmosphere,” you’ll do well to look elsewhere.

OCEAN CASINO — This is an easy stroll further down the Boardwalk, and my first William Hill Sportsbook today. 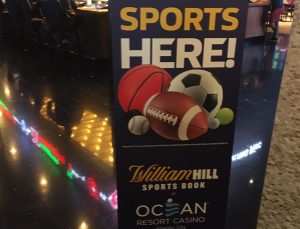 At 7,500 square feet, it’s not nearly up there with Bally’s — but it’s the favorite for many for good reason. Turns out this is about how large a spot you need to get a sufficient sense of spaciousness.

The bar is large enough, too — and popular, even around 1 p.m. on a Saturday. More than 60 bettors were on hand by then — yes, including a couple of ladies. Comfortable leather — or at least, it felt like leather — seats, and a massive video board broken up into as many or as few games as operators like. The location in the center of the casino floor — so there are entrances on opposite sides — makes it clear that this is a priority for the operators.

There’s even a “Skybox Suite” option to enjoy betting above the fray. It’s not difficult to picture spending an entire afternoon here. This sportsbook was “first to market” in mid-2018, and it has the feel of a place that has “figured it out.”

TROPICANA — Enough with the walking, my Lyft app isn’t working, I haven’t installed Uber on this phone yet, and I’m on a time crunch. So I grab an old-fashioned taxi cab — before realizing just how old-fashioned.

Turns out most, if not all, cabbies in Atlantic City don’t take credit cards for trips that quickly max out at $13 within city lines. That seems … odd.

As for as the Tropicana sportsbook goes, this is another “large enough” facility at 5k square feet with an impressive 180 seats — and it, too, has William Hill as its brand mate.

One issue: good luck finding it from the entrance. Even some employees didn’t know where it is. (I asked a couple of the nice ladies at Hooters, and they were among those unaware.)

Your best bet is to follow signs for Chickie’s & Pete’s restaurant — and if you ask around, everyone knows where that is.

You’ll like it when you find it, though. Aside from the extensive seating, the 10 North Lounge serves as an adjacent sports bar — and with other food and drink areas nearby, you don’t have to worry about overcrowding keeping you away from the action.

Nice perk: Make a sports bet and enjoy a “Free Slice On Us” at Perry’s Pizza. 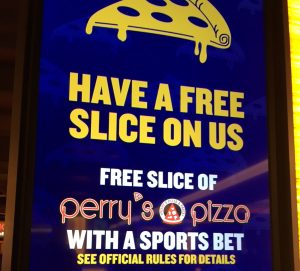 After finishing up with all five Boardwalk properties, I still haven’t found that elusive Rutgers fan yet.

On to the marina

GOLDEN NUGGET — This one is on the modest side, and hosted only about two dozen people at one point Saturday afternoon. It’s … adequate.

Like Hard Rock, this one feels more as a convenience for hotel guests than a “destination” sportsbook.

Capacity is listed as a modest “173” — so the 19 visitors I saw had plenty of elbow room. Note: This was the one sportsbook that didn’t have any female visitors, but most were around 90% male.

Good news for NBA bettors, unlike last year, you now will be able to bet on any game not involving the Houston Rockets, who have a part-owner in Golden Nugget owner Tilman Fertitta.

HARRAH’S — Like its sister property Bally’s, this facility is known as “The Book.”

But the name is the main commonality. This one is only about 25% as large, with two “Fan Cave” areas instead of five.

If you’re from out of town, have a Caesars Entertainment card, and want to mingle in a big space in Atlantic City, Bally’s is the better bet.

BORGATA — After three strolls — including a little-known path you can walk from Golden Nugget to Harrah’s — and three cab rides, I have eight minutes to go before my self-imposed 3 p.m. arrival deadline. 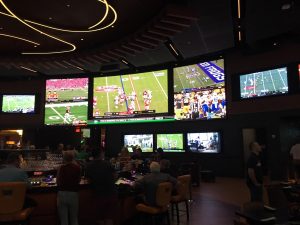 There is a sign for the sportsbook as soon as you walk in, then you walk straight and — you’re on your own. Eventually, I find it (after walking by a poker room that is packed to the gills, by the way), at 2:58 p.m.

Finding the $12 mm Moneyline sportsbook is worth the effort, however. More than 100 patrons — the largest crowd of the day, although likely aided by my later arrival — filled most of the seats, with some tables marked as “reserved.”

This is a very impressive, large space — around 8k square feet — but it might be difficult to access if you aren’t a “regular.”

But there, in my last sportsbook sojourn, was a fan wearing what surely was Rutgers gear — even if the Scarlet Knights had just fallen behind, 52-0.

A closer look revealed — it was a Wisconsin fan.

So with the state university campus located not even two hours away, none of the few hundred gamblers I encountered in eight sportsbooks wore Rutgers garb — not a sign that the alumni still have any hope for their Scarlet Knights (who also didn’t cover the four-touchdown point spread).

Coincidentally, head coach Chris Ash was fired the next day. 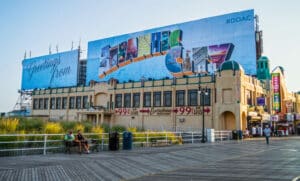