First of this year's six broadcasts aired on Saturday 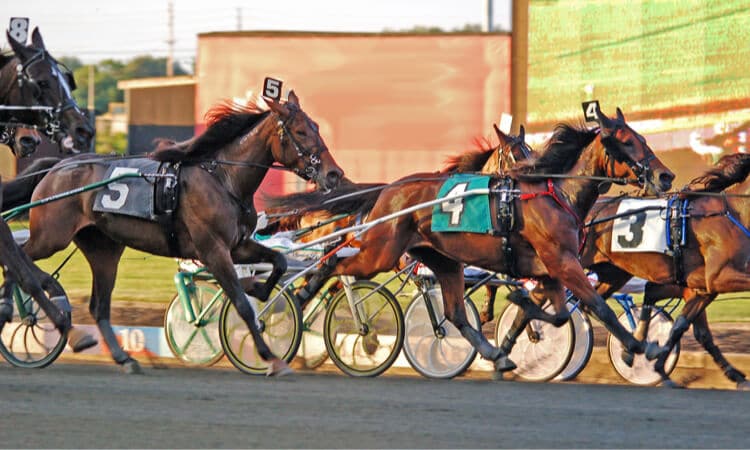 The biggest stakes events on the Meadowlands Racetrack calendar are being made available to a national television audience, as the New York Racing Association’s TV department has teamed up for six live telecasts on FOX Sports 2.

“We couldn’t be happier to once again be working with the superb TV team at the New York Racing Association to bring our races to a national audience,” Meadowlands Chief Operating Officer and General Manager Jason Settlemoir said in a statement. “It’s a great opportunity for our sport to be seen at its best in what is normally a thoroughbred environment.”

The first show was telecast on Saturday, and will be followed on May 14 (9-11:30 p.m.) and June 18 (9-11:30 p.m.) as part of NYRA’s America’s Day at the Races presentation that will feature thoroughbred racing from Churchill Downs in addition to the harness racing action from The Meadowlands.

The sixth and final show will be on Aug. 6 (6-7 p.m.), when the Meadowlands championship meet concludes with the 97th edition of the $1 million Hambletonian. That show will be telecast as part of NYRA’s Saratoga Live.

“NYRA and FOX Sports are very pleased to team up with The Meadowlands for another year of exciting harness racing,” said NYRA Senior Director of TV Broadcast Operations Eric Donovan. “And we are especially looking forward to showcasing two of harness racing’s biggest events, The Meadowlands Pace and Hambletonian.”

The second time around

This is the second year that FS2 will feature the top Meadowlands races. A year ago, Settlemoir applauded the business decision.

“NYRA is a perfect fit quite honestly for The Meadowlands because of the relationship that we have with them,” Settlemoir told Harness Racing Update. “They do a great job. And we think it only makes sense to try and get this audience involved and get us on TV. That’s always been something that [Meadowlands Racetrack owner] Jeff [Gural] and I have wanted to do, is put us in front of more people on television. We’re excited about the opportunity on Saturday and the opportunities going forward.”

NYRA at the time had just signed an agreement with FOX Sports television that extends through 2030 for daily racing coverage from Belmont and Saratoga racetracks in New York. As the top harness racing track in North America, it made sense for The Meadowlands to be interested in getting a TV deal of its own.

“I would love to see The Meadowlands get tied into something similar to what NYRA does on a daily basis,” said Settlemoir. “But we’ll have to see how everything goes and how things work and maybe this would be something that would be — as long as things go well — something that could be explored, since they race in the afternoon and we race at night.”

The racing broadcasts are produced and directed by harness racing experts, with the usual Meadowlands racing analysts on hand.

The larger FOX brand also has under its umbrella a sports betting platform that is available in New Jersey, FOX Bet.

NYRA’s point person in the inaugural season of broadcasts was the show’s producer, Kim French, who grew up going to races at The Syracuse Mile from age 4.

“Once we got wind that this show was going to happen this year, we knew that Kim would be the perfect person to kind of tie it together because she has the knowledge of our television production environment plus the knowledge of harness racing,” said Donovan.

French, an assistant director and production manager for NYRA, has worked in television for 15 years and produced countless broadcasts, including The Breeders’ Cup and Kentucky Derby.

“Because it is the first show of this nature, essentially, I’m the go-between, between my organization and The Meadowlands,” French said at the time. “So, what I do is apply my knowledge of harness racing and work at both ends to reach our goal, which is to promote harness racing to people that have not been introduced to it so that they can become fans or at least knowledgeable about the sport.”