Each NY/NJ team has a pair of early picks, and it's anyone's guess who exactly will end up where 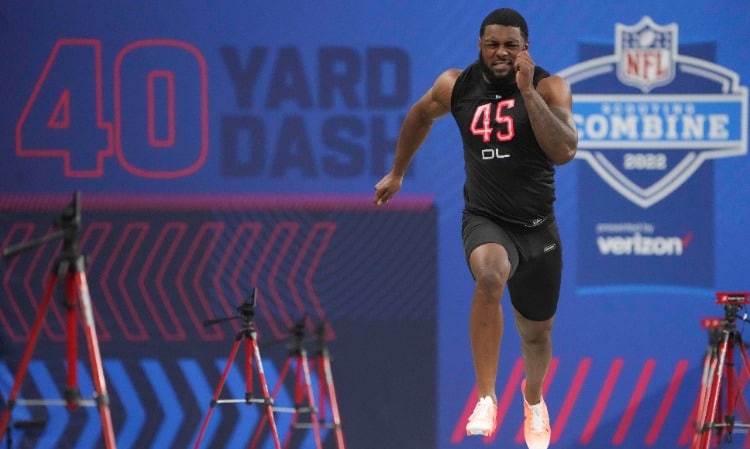 Well, no one knows what they will do. Hopefully, they won’t muck it up and give those headline writers fodder, but this is the Jets and the Giants, two teams not exactly known for their previous draft acumen.

But enough preamble: What are the teams going to do?

Jets pick first at No. 4

Well, if the sportsbook oddsmakers are to be believed, the Jets will be taking edge rusher Kayvon Thibodeaux of the University of Oregon at No. 4 and then coming back with Jameson Williams, the University of Alabama wide receiver, at No. 10. That combo is set at +600 at FanDuel, the shortest odds for any combination.

As for the mocks? All over the place. Mel Kiper has the Jets taking University of Cincinnati cornerback Ahmad “Sauce” Gardner and USC wideout Drake London. Dane Brugler of The Athletic has Thibodeaux and Ohio State wideout Garrett Wilson. Todd McShay agrees with both, but backward and reversed, with Wilson going fourth and Gardner 10th.

Overall, Thibodeaux is the betting favorite to go No. 4, with odds of +250 at PlaySugarHouse, followed by Florida State edge rusher Jermaine Johnson at +350 and Gardner at +450, both at FanDuel. From there, things get dicey, with North Carolina State offensive lineman Ikem Ekwonu at +800 at PlaySugarHouse, Travon Walker of the University of Georgia at +1500 at DraftKings, and Aidan Hutchinson of the University of Michigan at +2000 at FanDuel.

Going to be so exciting – This draft I’m sure will have a bunch of surprises! Thanks & I was amazed how fast he just kept rising. #Jets https://t.co/OMcQ2wMh4v

As for the 10th pick? Williams is the co-favorite, with odds as high as +400 at Caesars. He’s matched with Wilson at the same price, and London comes in at +600 as the next favorite. Notice a (wide) trend?

Cornerback Derick Stingley Jr. of LSU comes in next at +700 at Caesars, followed by Gardner at +1000, also at Caesars. Notice another, more corner-y, trend?

So to play it “safe” with the Jets’ second pick, PlaySugarHouse is offering odds of +120 that it’s a wide receiver, and +300 it’s a defensive back.

Of course, all this may be moot, as the Jets were actively seeking to trade for a top wide receiver during the offseason, and Deebo Samuel rumors will undoubtedly continue to circulate right up through Roger Goodell strolling to the podium to say, “With the number four pick …”

They guy wants to trade for Deebo and doesn’t mind giving up #10. The girl wants to draft a WR at #10. She just started crying#Jets pic.twitter.com/XgJ9wHo8Mp

Giants on the clock

As for the Giants, well, FanDuel has the shortest combo odds — at +600 — that the Giants will grab either Evan Neal, the University of Alabama offensive lineman, or Ekwonu at No. 5 and then take Gardner at No. 7.

Overall odds at No. 5? Gardner is at +380 at DraftKings, followed by Mississippi State offensive lineman Charles Cross at +400 at PlaySugarHouse, Ekwonu at +430 at FanDuel, Neal at +500 at FanDuel, and Thibodeaux at +800 at DraftKings.

Consensus, we do not have.

Yep. Good luck figuring it all out.

And as with the Jets, no one is ruling out a draft night trade, so stay tuned there.

In a night of uncertainties, however, two things are for sure: 1) There will be puns a’plenty in the Post the next morning, maybe even some alliteration, and 2) New York (and Pennsylvania) bettors will, once again, have to travel to the Garden State to get their bets down on the Jets and Giants, as draft betting is prohibited in those two neighboring states.