I recently wrote about the greed and desperation behind the MLB’s ban of sports betting ads, an edict that prevents the league’s teams and affiliated networks from accepting marketing money from sports betting operators. The article expressed that the optics of MLB’s decision are problematic, an opinion that is shared by Daniel Etna, an expert on legal and financial matters of professional sports leagues and teams.

I had a chance to connect with Etna, who is a partner in the Sports Law Group at law firm Herrick, Feinstein LLP. The firm’s clients include the New York Yankees and Chicago Cubs, and the partners have led counsel on advertising and sponsorship contracts, as well as broadcast and digital media agreements. We had a brief conversation in which Etna spoke candidly about MLB’s decision to deny its teams this revenue stream and the long-term impact.

The sustainability of MLB’s ban of sports betting ads

Etna initially contacted me after reading my article and, at first, I wasn’t sure what to make of the request to get in touch. The article is merely my opinion, but I do come down pretty hard on the league. Would a lawyer who has MLB teams as clients really be on my side?

A few minutes into my conversation with Etna, I got my answer when I asked him about the sustainability of MLB’s sports betting ad ban, and he said:

First of all, I really think the MLB fumbled the ball by asking states to mandate that sports betting operators pay integrity fees. The MLB initially asked for way too much — an impossible number — and the whole thing was not well thought out.

In terms of the ad ban’s sustainability, Etna brought up an interesting point that I hadn’t previously thought about:

The ban on advertising affects the MLB teams on a local level, which means that’s not shared revenue. Any money a team generates in local markets goes directly in its coffers. There is absolutely tension building between the league and its teams, because the teams are missing out on a potential revenue stream.

The whole situation makes no sense. The MLB wants money — that’s what integrity fees are all about — and yet its response to getting shut out is … to prevent its teams from making money?

As more states pass sports betting bills and online apps begin to expand existing markets, I see the ad ban getting nerfed. It’s unfortunate that New York’s sports betting bill appears it will be pushed to 2019 because the leagues are holding out hope for integrity fees in the state.

The impact of legal betting on sports leagues and franchises

When I asked Etna if he shares Dallas Mavericks owner Mark Cuban’s beliefs about the impact of sports betting — that the value of franchises has doubled overnight — he said, rather honestly, that he wasn’t sure.

What he did say is legal sports betting is poised to bring with it new, fertile sources of ad revenue and media rights, both areas he’s extremely familiar with helping sports franchises navigate. He also said he understands that fantasy sports and sports betting get more eyeballs watching on TV and more fans in the seats. He’s seen it in his own home:

I have two sons, and when I can’t tear them away from the end of some random football game like Jets vs. Jaguars, I know something is up. It’s not about the game — they’re just hoping for a garbage time touchdown.

If sports betting is anywhere close to as big as experts think it will be, there’s no way MLB can keep this up. Maybe the league sticks to its guns for the remainder of this season. Currently, only New Jersey and Delaware have joined Nevada at the sports betting dance, so MLB has less to lose than it will a year from now. Sports betting will eventually be too big of an opportunity for the league to pass up on.

Near the end of our chat, Etna said something that summed up this topic nicely:

The requests for integrity fees, and things like this advertising ban — they’re black eyes for the MLB and the other leagues.

I couldn’t agree more, and I’m glad somebody with the knowledge and experience working with professional sports leagues is saying it. The MLB has a black eye now, but eventually, only the the scars of a losing fight will remain. 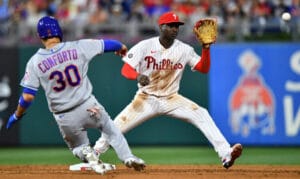 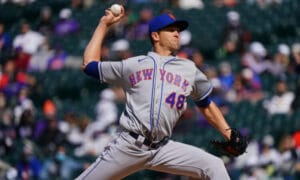 Struggle Ahead For NJ Horsemen In $150M Lawsuit Vs. Sports Leagues