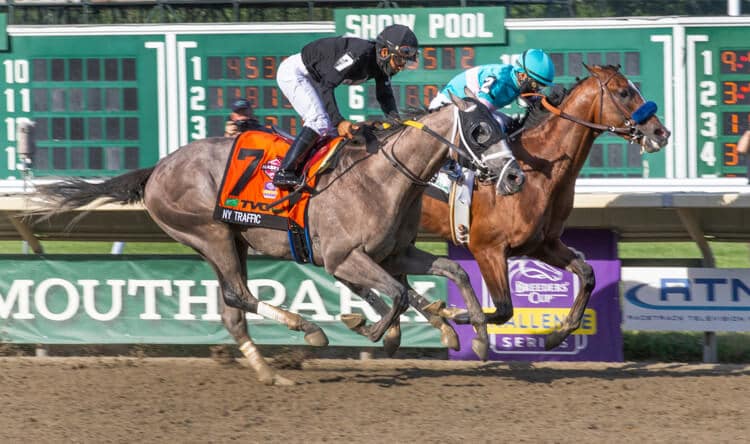 After two years without a Media Day due to COVID-19 concerns, officials at Monmouth Park were pleased on Thursday to welcome back dozens of familiar faces who have long frequented New Jersey’s lone thoroughbred racetrack.

And when the first race goes off on May 7, bettors will have two choices for how to make their win, place, or show bet — through the traditional, fluid parimutuel system or by making bets with fixed odds.

Monmouth operator Dennis Drazin said the new wrinkle addresses common gripes that gamblers have when they bet on a horse at, for example, 5-1 odds — only to see the horse bet all the way down to even money when last-minute wagers are tallied moments after the horses have left the starting gate. With fixed odds, when a bettor sees the odds up to 48 hours before a race, they know their 5-1 choice to win will pay five times the bet should that horse indeed finish first.

Next week’s fixed odds offering at Monmouth Park will mark the first time that a U.S. racetrack with have the new way of betting a horse race on its menu.

“In both Europe and Australia, fixed odds wagering has a proven track record of success, and we’re confident it will be just as popular in the United States,” Drazin said.

Australian-based BetMakers Technology Group will deliver and manage fixed odds wagering at Monmouth Park with the slogan, “The odds that you bet are the odds that you get.”

Where to find the fixed odds windows

“This is not only exciting for BetMakers and Monmouth Park, but for the whole racing industry, as we firmly believe the launch of fixed odds marks the start of a model which will be a huge success for all the participants of the racing industry who eventually come on board,” said Todd Buckingham, the CEO, managing director and founder of BetMakers.

The minimum fixed odds wager is $1. There is no maximum bet, but any wager that is calculated to profit more than $5,000 on a win bet or $2,000 on a place or show wager is subject to approval by the BetMakers trading department. While Monmouth Park’s opening day coincides with the Kentucky Derby race card, at first fixed odds will only be available on races taking place at Monmouth Park.

The goal with the new twist on betting

Drazin said he hopes that the sports betting industry’s leading operators in the U.S. will agree, now that fixed odds has arrived for Monmouth Park races, to make horse racing odds at the track part of their gambling apps on customers’ cellphones.

One lesson of COVID, Drazin said, was that many younger gamblers want to be able to find a bet “24/7” — with obscure options such as Ukrainian table tennis even gaining a following in some states, while American sports mostly were shut down in the spring of 2020.

Drazin also noted that horse racing fans have been using fixed odds to bet on Monmouth Park for many years, but those bettors all have been located outside the U.S.

Monmouth Park’s 62-day meet runs through Sept. 18 and will feature 52 stakes races — 10 of them grade — worth $8.3 million. The highlight, as always, is the Grade 1, $1 million TVG.com Haskell Stakes, which takes place on Saturday, July 23.

While first post on Opening Day is at 2 p.m., with a noon start for The Haskell, the post time for the Saturday and Monday holiday cards will be 12:15 p.m. General admission for clubhouse or grandstand will be $6 (or a season pass for $100), while box seats start at $30. While valet parking is $15, all other parking will be free — with children 12 and younger getting in for no charge. For the first time, fans are able to purchase tickets in advance at seatgeek.com/monmouth.

Meanwhile, the “bring-your-own-cooler” concept — suspended for the 2020 and 2021 meets — is back this year. Visitors will be permitted to bring a cooler no larger than 15X25 inches, with beer or wine permitted, but not hard liquor, through the picnic admission gate.

Drazin previously told NJ Online Gambling that the New Jersey Division of Alcohol Beverage Control began cracking down in 2018 after a number of reports of underage drinking at the Oceanport track. And with security needing to focus on monitoring all arriving visitors during the COVID-19 pandemic, the cooler ban was put in place.

“Eleven years ago, we were on the precipice of disaster,” Drazin recalled. “The racetrack was about to be privatized or closed. And everyone bet against us to survive more than a year.”

The state’s thoroughbred horsemen elected to take over the ailing track from the state, with Drazin’s Darby Development company taking the reins of managing the Oceanport site.

The launch of legal sports betting in the state in mid-2018 and the subsequent revival of a state purse subsidy program that will provide $10 million in additional prize money has further improved the track’s bottom line. Fixed odds could prove a lure for younger sports bettors who have gotten used to locking in odds to make a wager on a ballgame, since the result will be the same for a horse race.

“Now we not only can break even, but we can make a few bucks,” Drazin said.