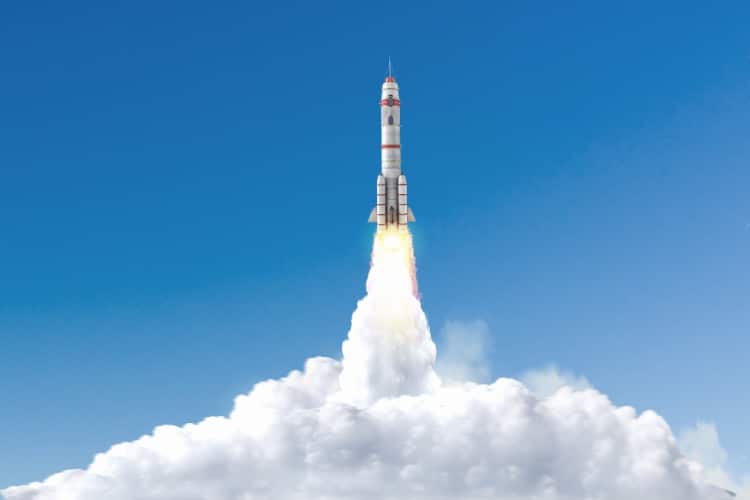 So I’m not sure if this is one of those “The end is nigh!” type of deals or one of those “What a great leap in the history of Western civilization!” thingees, but I do know this much: DraftKings’ in-house casino design team has managed to marry the experience of a caffeine buzz (or crack cocaine rush for you more serious degens) and the yodeling-themed “Cliffhangers” game on The Price Is Right.

In a word: Eeesh.

OK, here’s the facts: Called “Rocket” and currently offered only in New Jersey — with Michigan and West Virginia next in the queue pending regulatory approval — the game is very simple. You place your bet — as little as a dollar — and your rocket takes off. You’re on the rocket with any number of people, but you’re not competing with them. You’re just boarded with them. And then there’s a six-second countdown — you never have to wait more than six seconds for the next rocket to come along, kind of a utopian vision of mass transit, circa 3021 — and then the fun starts.

And how does one win? By bailing off the rocket before it explodes (never mind that utopian mass transit take above) and cashing in at the level you bailed at.

But remember, it takes a good 12 seconds to get to 2.0, so you may choose to bail as soon as the rocket takes off to win yourself a nickel or dime on your $1 bet. Of course, there’s a chance the rocket explodes immediately, and that’s that.

While this game sounds ridiculously simple — and it is — it marks a step forward in the true gamification of slots. This isn’t just leaderboards and storylines and loyalty points — this is a true “you’re in control (kind of, but not really)” game for real money. And while you’re not really “in control” — as stated, the rocket can blow up at launch, costing you your stake — you kind of are in control, as you can easily sit there all day taking dimes from the game … or tempting fate and waiting to bail after you doubled, tripled, or more’d your money.

Having personally sampled the game a few times even if not a slots guy (or a games guy) in general, I can say this: It’s nerve-wracking and exciting. I’ve never played a game for a dollar that got my heart beating as quickly. No joke.

Apparently, I’m not the only one who likes the game.

“Rocket set a record for at-launch game participation and is showing no signs of slowing down,”  a DraftKings spokesperson told NJ Online Gambling via email. “Rocket is an entirely new gaming concept and DraftKings is proud to be the first US operator to offer this type of game.”

Worth noting here: The game was designed entirely in-house, one of over 30 games the company has created. But this is the first one using this entirely new concept, which brings a level of not-skill (but plenty of steely nerve) to the “table.”

Expected net return? Well, tough to say, certainly, but the expected payback is 97% if you bailed at 1.01 every time. Obviously, this is a game of luck, and obviously, the odds are against you.

But it is a different animal, this game, as you are taking an active role in the outcome — even though the point the rocket explodes is predetermined.

And it’s scaring some folks whose job it is to tamp down problem gaming.

“It’s exacerbating the thrill and rush. That part of the brain that lights up when you gamble anyway, it’s putting it on acceleration,” said Brianne Doura-Schawohl, the vice president of US policy and strategic development for EPIC Risk Management. “It’s literally like a rocket ship, like putting rocket fuel on that part of the brain by giving you that trigger to control how much you’re going to risk when you play. It’s terrifying.”

To be fair, Doura-Schawohl hasn’t played the game, only watched the demo, but her concern centers on the “in control” part of the equation — which, to also be fair, is what makes the game so darn fun.

“It’s definitely the first of its kind, and it’s disappointing in my mind because it is giving that false impression that people have more control, that there’s an element of skill more than there truthfully is,” she said. “I do worry it gives this false sense of control over the outcome when there’s an algorithm that details when the rocket will explode.”

Doura-Schawohl is also concerned about the autoplay feature, in which a player can play up to 50 times in a row.

That also troubles Keith Whyte, the executive director of the National Council on Problem Gambling, who said the high speed of play of the game coupled with the autoplay feature is highly correlated with gambling addiction.

Whyte is also concerned about the illusion of control.

As for DraftKings’ reaction to such concerns?

“DraftKings takes responsible gaming concerns seriously,” came an emailed response. “In addition to providing our customers with a number of responsible gaming resources across our entire product suite, we have committed millions of dollars to promote safer play initiatives and we are constantly working with industry experts and external stakeholders.”

In the end, this is almost certainly just the beginning of slots that play like games and give the player the opportunity to exert some measure of control. Whether this proves to be a good idea or not is something to be wrestled with down the line. In the meantime: Yeah, it’s (sorry) a blast.