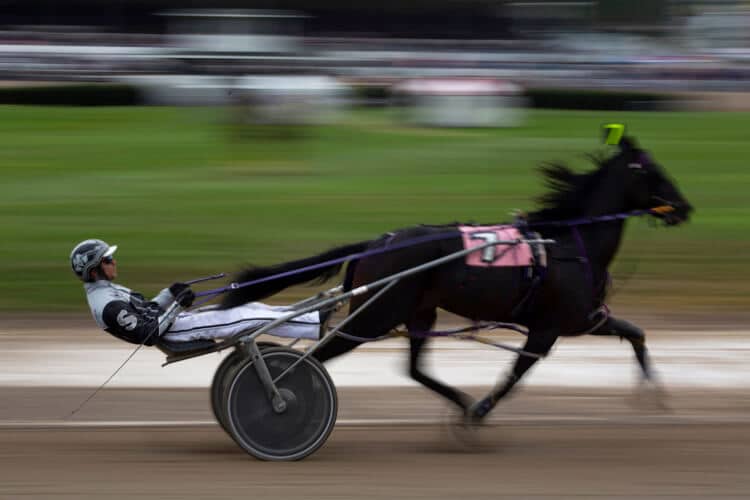 Only a decade ago, the future of the Meadowlands Racetrack — and perhaps U.S. harness racing in general — seemed shaky. With Gov. Chris Christie ending an annual $30 million purse subsidy from the Atlantic City casino industry, standardbred owners wondered how the track could stay in business.

Enter New York City-area real estate mogul Jeff Gural, who took over operations from the state. And as 2022 begins, the future of the sport looks promising. Total purses for Meadowlands stakes races, track officials announced on New Years’ Eve, are estimated to be $20 million this year.

The “Championship Meet” headliners are a pair of the sport’s most sought-after stakes. The track’s $700,000 Meadowlands Pace, along with the supporting card that comprises the $2.5 million “Greatest Night in Harness Racing,” is set for Saturday, July 16. Meanwhile, the $1 million Hambletonian and $500,000 Hambletonian Oaks headline the $3.5 million Hambletonian Day afternoon of racing on Aug. 6.

New to the schedule is the $2 million “New Jersey Classic Series” for Jersey-sired 2- & 3-year-olds in September. The 3-year-old races are for trotters only, while the 2-year-old races have trotters and pacers. There are two levels, designated as A and B, and the payments provide eligibility to either. The level chosen in which to compete will be made when the nominated horse is declared to race.

A mare division for the Graduate Series also has been added. It will mirror the existing Graduate schedule, with 4-year-old mares racing three legs and a $125,000 final. The second leg for all Graduate divisions will be raced at Woodbine Mohawk Park in Ontario, Canada, in June.

The Peter Haughton and Jim Doherty Memorial 2-year-old trotting stakes have been enriched, with the estimated purse for each boosted to $400,000. As an added bonus, the winners of these two stakes may also activate a “Win & You’re In” bonus offered by the Breeders Crown, providing the victor is eligible.

The “Freshman Fall Final Four” stakes will return to the elimination and final format in late November, with the final purses for those stakes in the $400,000 range.

Two of the races for older mares each have been retitled for 2022. The connections of Perfect Sting and Six Pack have elected to sponsor the stakes previously known as the Artiscape and Joie De Vie, respectively.

The New Jersey Sires Stakes (NJSS) races at the Meadowlands will offer substantially increased purses this year. An across-the-board 20% bump puts the finals at $240,000, enough to be competitive with other programs in the region. And for the first time, the $1 million TVG Championships list of Point Earning Races will include the Derbies at Hollywood Dayton, bringing the total to seven.

Track officials announced a few administrative changes to the conditions for stakes in the new year. All 2-year-old stakes at the Meadowlands have new language in the conditions that excludes treatment with Lasix or any adjunct bleeder medication for the race. Meanwhile, all Meadowlands-administered stakes requiring eliminations will employ a new formula to draw for the final.

This method rewards a higher position in the official order of finish in the elimination, with an increased percentage of a favorable post position draw for the final. The hope is to entice more competitive racing in the elimination races. This formula will not be used for NJSS- or Hambletonian Society/Breeders Crown-administered stakes.

The Meadowlands finished 2021 with the 92 race cards and an average wager per card of just over $3 million. Betting for the calendar year totaled $276 million.

General Manager Jason Settlemoir noted that the Meadowlands was the only nighttime track — whether standardbred or thoroughbred — to average $3 million in handle. Total handle was up about $100 million over 2018, just before the February 2019 signing of a bill to provide $10 million each in purse supplements to both breeds in the state. The legalization of sports betting in 2018 has provided another revenue stream for The Meadowlands, Monmouth Park, and Freehold Raceway.

“The 2018 season saw an average nightly handle of just over $2 million a night, so it’s easy for everyone to see the amazing progress we have made in New Jersey,” Settlemoir said. “The average handle is up $1 million a night.”

After being the leading driver at both the Winter-Spring Championship and Fall Meetings, Dexter Dunn finished the year atop the Big M standings with 166 victories, while Yannick Gingras was a distant second with 116.