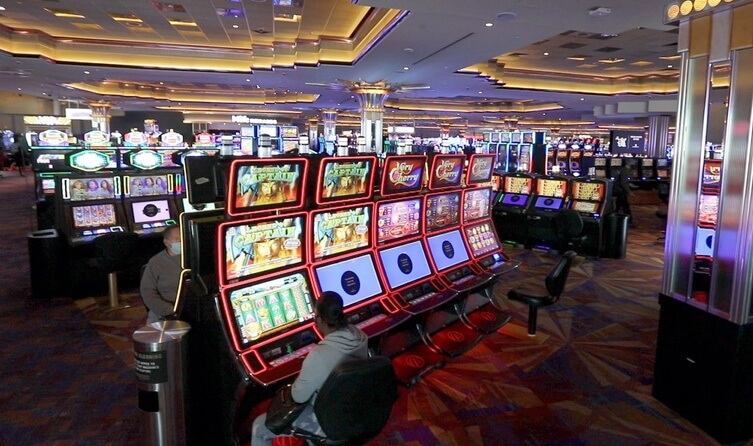 It was business as usual on a Tuesday lunch hour at the Empire City Casino at Yonkers Raceway, with a bit of an attendance boost due to a 50% off promotion at The Big Kitchen food court for rewards club members age 50 and up — which is most of the venue’s clientele anyway.

The harness track’s 15-year-old racino — which boasts slots, but no live-dealer table games or sports betting — no doubt featured many of the same customers who stopped in on the inaugural days of operation in 2006. A fair portion of those regulars hail from northern New Jersey,  judging from a look at the license plates in Empire City’s parking lot and the fact that the only legal slots in the Garden State are located way down in Atlantic City. And for years, the racino has had a daily bus route that ferries in passengers from Jersey City to Fort Lee.

Much of the interior signage, frankly, looks every bit of its 15 years — and some of the slot machines looked to be “veterans” themselves. Wonder Woman, Willy Wonka, and, of course, Wheel of Fortune are some of the biggest brand names — and some of the most popular offerings — among the nearly 5,000 slot machines on the property, although many of them have not yet been reactivated even as COVID-19 recedes in the region.

Video versions of blackjack, craps, roulette, and baccarat drew little interest from the seasoned crowd, which also shied away from a “smoking patio” deemed necessary because New York, unlike Pennsylvania, does not allow smoking indoors at gambling facilities. (New Jersey? Well, that is a “no” for now but “to be determined” as to the future.)

Change could be coming at Yonkers

But by mid-year 2022, there is liable to be a lot of discussion about a clause in the Upstate New York Gaming and Economic Development Act of 2013. The act, approved twice by the legislature and then turned into law after a successful statewide voter referendum, mainly addressed the establishment of up to four casino licenses in the northern regions of the state.

Another aspect of the bill pointed out that there would be “no downstate gaming resorts for at least seven years after [the] first gaming license is awarded.”

In 2013, that seemed to be a long way away for up to three New York City-area casino licenses. But in December 2015, the Rivers, del Lago, and Catskills casinos all received licenses. That not only opens the door for the state gaming commission to do the same for three winning bidders in the New York City region in December 2022, it also means that a process for determining the best applicants should begin much sooner than that.

So which sites are most likely to gain approval?

For several years, the expectation in New York political and national gaming circles has been that Yonkers and Aqueduct are clear frontrunners for two of the licenses. With existing racinos, revamping the gaming floor to include live-dealer poker, blackjack, and other table games — as well as a sportsbook — would be relatively simple compared to building a new casino facility from the ground up.

Malaysian gaming giant Genting owns Aqueduct, while MGM Grand closed on its purchase of the Yonkers site in January 2019 for $850 million. The sellers receive an additional $50 million if MGM has a full-fledged casino license by 2024.

Far less clear is where the third casino license might wind up going.

Reports in April included a suggestion that efforts to move up the timetable for issuance of the casino licenses within a year or so collapsed in the waning days of finalizing the annual budget, while a number of elected officials in Manhattan are adamantly opposed to a casino there, even though casino operators naturally find the city’s wealthiest borough quite appealing.

The moratorium on casino licenses also expires next year for Westchester, Rockland, and Putnam counties, as well as Long Island, but it’s not clear if any serious contenders will emerge in any of those suburbs.

No member of the New York State Legislature — with the possible exception of Assemblyman Gary Pretlow of Yonkers — is more eager to get the downstate casino licensing process going than Joseph Addabbo Jr. of Queens, who, like Pretlow, has a likely license winner in his own backyard.

But Addabbo, in particular, is eager for the commission to issue a formal Request for Information package on mobile sports betting to any potential bidders as soon as the end of next week.

An estimated 20% of the New Jersey sports betting operators’ $399 million in gross revenue in 2020 came from the pockets of New Yorkers who couldn’t place a legal bet in their state online and whose nearest brick-and-mortar sportsbook is located in the Catskill Mountains.

“I remain optimistic that we’re about to hear something soon from the gaming commission” on mobile sports betting, Addabbo told NJ Online Gambling. “And in my opinion, once all the energy from mobile betting [regulation planning] pays off, it will be possible for the commission to focus on the casino licenses.”

For now, Yonkers’ racino — which reported a whopping $56 million in gross revenues in April 2021 and again in May — will get by just fine.

To mask or not to mask?

The first question I tend to get from those who hear of my various visits to gambling and entertainment venues these days is about mask requirements.

At Yonkers, I didn’t notice a clear sign containing a policy on the way in, but the first wave of slot players I saw nearly all wore masks. Wandering further into the racino, a sign appeared noting, “Per CDC Guidance, fully vaccinated guests are not required to wear masks.” 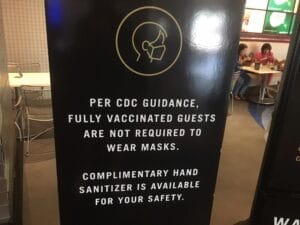 And in that area, far fewer did — although employees were masked throughout the facility.

Masks were scarce at outdoor facilities I visited recently — such as Monmouth Park and the Meadowlands Racetrack. And of the 29,000 or so fans who joined us at Citi Field to watch Jacob deGrom and the Mets on Saturday, neither my pal nor I noticed any masks outside of those worn by employees.