In the first year of shared liquidity allowing poker players to win WSOP bracelets from New Jersey, entry numbers are up across the board.

With the introduction of the World Series of Poker Europe in 2007, the WSOP shifted the paradigm. No longer did you have to be in Las Vegas to win a bracelet.

In 2015, another new frontier was conquered, as the first ever online WSOP bracelet event meant you could play from the comfort of your home (or hotel room) without pulling up a chair at the Rio.

This year, the WSOP razed yet another geographical barrier. Thanks to shared liquidity between WSOP.com in Nevada and New Jersey, for the first time, it became possible to win a bracelet in a U.S. state other than the Silver State.

All four of this year’s online bracelet events are now complete, and the NJ numbers are encouraging, but far from overwhelming. WSOP online entry figures are up across the board, and the opportunity to play without leaving New Jersey played a role — if only a modest one — in supporting that trend.

In the three repeat events, all of which allowed re-entries both last year and this year, the numbers were unanimously on the rise: 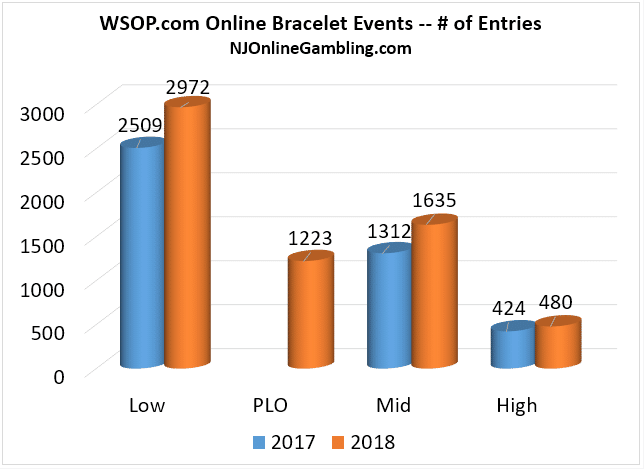 The numbers could have, and should have, been higher, however. Technical glitches made it difficult for players with international WSOP.com accounts to enter. Ultimately, only 19 international players added to that prize pool. (Unfortunately, WSOP was not able to provide figures on how many of the 2,123 players were located in New Jersey.)

For the other three events, though, NJ data was available. Starting with Event #47, the $565 PLO tournament, among 657 unique players (who ponied up 566 re-entries), 60 were international, and 107 were situated in Jersey. That includes the eventual winner, Matt “mendey” Mendez, who grinded it out until 9:31 a.m. on the east coast before clinching the bracelet.

Having 16.3% of the players based in NJ rather than NV is a substantial figure, though it’s hard to extrapolate just how meaningful it was without a 2017 event, pre-shared-liquidity, to compare it to.

For this past weekend’s final two online bracelet events, we have the New Jersey numbers and the year-over-year entry increases to shed light on what it all means.

Let’s compare this event to Event #10. Entries in Event 61 were up 24.6%, substantially more than the 18.5% increase in Event 10. But remember, international players struggled with technical problems in Event 10. Change the 156 internationals who played Event #61 to a mere 19, like we saw in Event 10, and the total entry growth would only be 14.2%.

For what it’s worth, a Nevada-based player, Ryan “Toosick” Tosoc, won the bracelet and the top prize of $238,778, while his heads-up opponent, Anthony “Flawlessbink” Maio, captured his $175,206 payout while seated in New Jersey.

It makes perfect sense that, at higher stakes, a higher percentage of the players were located in Nevada. After all, these tournaments played out on the eve of the WSOP Main Event beginning. If you have $3,200 available to enter a bracelet event, you’re that much more likely to be the sort of person making the trip to Vegas to play in the $10K world championship.

The $341,598 first prize went to Chance “BingShui” Kornuth, who just two weeks ago shared his insights about what makes his fellow Chip Leader Coaching pro Joe McKeehen so effective in massive-field tournaments. It turns out Kornuth knows a thing or two about winning tourneys as well. This is his second WSOP bracelet, following a 2010 victory in the $5K PLO event at the Rio.

In the final analysis, players in New Jersey having the option to compete for bracelets from home didn’t translate into a seismic shift in entry numbers. But it certainly helped. And it sets the stage for more impactful increases down the road.

By this time next year Pennsylvania could be part of the shared-liquidity game, a state that most definitely comes with a large enough poker-playing population for vibrations to be felt in Nevada.

Pennsylvania is currently dealing with a host of problems preventing online poker from getting off the ground. But the Keystone State has 142% of the population of New Jersey. In Event #61 this year, 163 NJ-based players competed. That means a fair estimate for Pennsylvania players, based on population size, would have been 232.

Obviously, these aren’t pre-Black-Friday Sunday Million numbers we’re talking about, at least not the turnout figures. But if Year 1 of the New Jersey WSOP.com experiment is any indication, these online bracelet numbers are only going to get bigger with every state that regulates online poker.