For a while there it appeared Atlantic City had finally closed the book on its more than decade long downswing. 2017 marked the second consecutive year in which gaming revenue increased, and the first since 2006 that land-based revenue ticked upward, albeit by a razor-thin margin.

It was suspected that this positive trend would continue into 2018. So far it has not.

Due to inclement weather and a general lack of motivation to visit the boardwalk city, revenue has tumbled. This, despite the stellar performance of the state’s regulated online casinos.

March doesn’t bode much better for AC, as the eastern seaboard has been pummeled by winter’s wrath. But hope is on the horizon, and there’s still reason to believe AC could squeak out a win in 2018.

In January, Atlantic City revenue stumbled 10% year-on-year, which was followed by an 6.5% decrease in February. Factor out online gambling, which was up 17.1% for the first two months of the year, and revenue was down a rather dismal 12.7% for January and 8.9% last month. 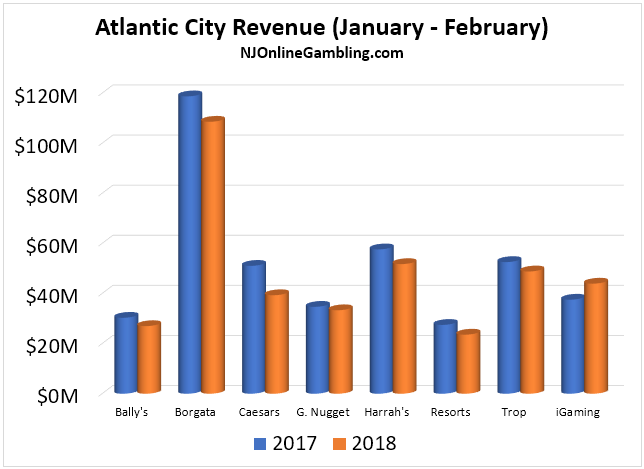 In fact the only casino that saw its revenue increase was Golden Nugget. The casino’s land-based revenue is down 3.9% year-on-year, but thanks to its burgeoning online casino business, total revenue shot up 8.7%. More impressive still, online revenue accounted for 31.3% of the operator’s total revenue, up from just 22.3% last year.

The industry’s poor performance in January ($184.3 million) was attributed mostly to inclement weather. That’s not an unfair assessment, as AC did suffer from below average temperatures and at least three days of heavy rain and snow. By contrast, January 2017 was exceptionally warm, with multiple days in the 50s and 60s.

Using the same justification for February holds less water, as temps were generally above average, soaring as high as 76 degrees on February 21. There was a hefty amount of rain, but little snow.

March is shaping up to a be another rough month for AC as precipitation amounts have already far exceeded the monthly average, thanks in part to several nor’easters slamming the east coast. There also wasn’t much going on in terms of notable entertainment or promotions.

The bleeding might be cauterized somewhat by the presence of an extra weekend day this March as compared to last. Whether or not that will be enough for revenue to pull even or near-even is an open question.

There’s sufficient reason to believe that Atlantic City will rebound (again) in the coming months.

The event most likely to provide AC with a much needed infusion is the imminent opening of Hard Rock Casino. The former Trump Taj is currently undergoing a projected $500 million in renovations, and is on pace to open sometime this summer. At launch it will offer somewhere in the vicinity of 2,400 slots and 130 table games, which is roughly the same amount of games supported by Atlantic City’s second biggest casino, Harrah’s.

Hard Rock also has big non-gaming plans, most notably a planned 200 nights of live music throughout its first full year. It also aims to open a beach bar this summer. These should do well to attract a broader demographic to the casino, who may fill their spare time by gambling.

More questionable is the opening of Ocean Resort Casino. Its former self (Revel) was an unmitigated disaster, shuttering its doors after just two years in operation. Until recently, the monolithic structure stood as a physical reminder of AC’s failings. But in January it was purchased by Colorado developer Bruce Deifik for $200 million, with plans to reopen the rebranded facility as early as this summer.

Like Trump Taj, the old Revel will undergo a transformation, with Ocean pouring $200 million into the relatively new property. So far, there hasn’t been too much evidence of these renovations, although that’s not to say progress has been slow.

While the opening of two new casinos will almost certainly pique tourist interest in the short-term, it is questionable whether Atlantic City can reasonably sustain nine casinos. Remember, it was just a few years ago that AC boasted 12 casinos. The shuttering of five underperformers resulted in a healthy consolidation of the market, with the remaining casinos reaping higher revenue.

Experts opine that the future of the city may be dependent more on the ability of the new casinos to draw gamblers via non-gaming attractions than their slot machines and table games.

Not to mention, both Ocean and Hard Rock are poised to open their own online casinos, which could launch in tandem with their land-based counterparts. There still appears to be an appetite for new online casinos in the state, as long as they bring something new to the table. Play SugarHouse has already proved this, as despite launching in 2016 it has become one of the industry’s top performing sites.

Unfortunately, Atlantic City has already dug itself quite the deep hole, so it remains questionable whether the opening of two new casinos — which could end up cannibalizing existing brands — and a strong performance from iGaming will be enough for the city to see year-over-year gains in 2018.