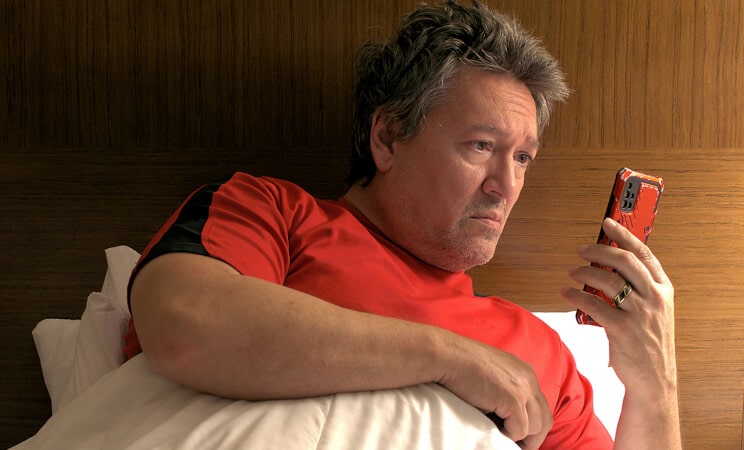 I have played a set of tennis against Billie Jean King, golfed 18 holes with Lawrence Taylor, ridden in the back seat of a souped-up Infiniti as Formula I Grand Prix champion Sebastian Vettel drove 100 mph on a 35 mph road in the shadow of the Lincoln Tunnel, and ridden on a camel. (The latter two occurred in the same week, and the camel was by far the bumpier ride.)

I have even gone parasailing up to 1,000 feet and had my guide send me plummeting neck-high into the Atlantic Ocean, then send me back up 1,000 feet again — all within seconds. No problem.

I have spent half an hour interviewing Donald Trump at his Trump Tower office, thanks to a meeting arranged by Michael Cohen that was interrupted twice by phone calls — one from Ivanka Trump and the other from Matt Lauer.

And for what many might see as the most terrifying experience of all, I was peppered for 30 minutes on live national television by feisty Court TV host Nancy Grace about a manslaughter trial that I was in the midst of covering — and I came back to do it a second time!

But nothing takes me more out of my comfort zone than gambling. Real gambling, I mean — not the occasional $10 sports bet at nearly even money that is my “usual lane,” with sportsbook accounts puffed up over the years by free sign-up bonuses and occasional incentives that have yet to be drained.

Still, after writing about so many new promotions in New Jersey last week, my mind began to wander — especially after I remembered that the biggest one of all, Caesars Sportsbook and its offer to go “Full Caesars” with a refund of up to $1,250, is an app I didn’t have.

Please, don’t even think about this if you have any credit card debt, a mortgage, a car loan, underfunded kids’ college fund, or so on. This promo, like most, is anything but “risk-free.”

But since I don’t check any of those boxes above, I am in position to be your guinea pig on this journey.

Lawrence Taylor once told the rest of us in our golf group that just the previous day, he had taken on fellow North Carolina Tar Heels alum Michael Jordan for a mere $10,000 a hole. Asked who won, LT laughed and said, “I did!”

I laughed, too, because I know that everyone who asked Jordan about that match no doubt got the same response.

Now I’m about to dip a toe into the very shallow end of that sort of pond for a few hours — and already I’m getting cold feet. But here we go.

First step was signing up at Caesars with the NJ Online Gambling promo link and code.

The promo page walks you through the process. In this case, “Simply create an account and within 30 days, make an initial real money wager on any sports market or bet type of at least $10 or more. If it grades out as a loss, Caesars Sportsbook will award a one-time free bet equal in value to the stake of your lost wager (max. $1250).”

Next, I need to fund the account, which was fairly easy.

But how much do I put in the account? Already feeling a bit of trepidation, I sign up with $1,000 instead of that $1,250 maximum, making for a nice round number.

Of course, the bet itself has me putting up $1,000 to win not $1,000, but $909 — which hardly qualifies as a classic “round number.” Rookie mistake, of sorts. File all this under a small amount of damage control.

I quickly realize that the best way to think about this was that my account is $1,000 poorer. Period. And if you would notice that missing amount for sure in your next bank statement, stop now. But since I passed that test, I got to take a breath and then and only then start to ponder, however briefly — what if I win?

Pulling the trigger, with caution

Of course, choosing the right team would help.

I looked at each of my “Fast Five” picks that I made on Thursday’s Gamble On podcast and began zeroing in on one game. I believe I have had a winning record in Week 1 in each of the past four years, including a 5-0 mark in one of them. It’s the second half of seasons that often has brought me right down around .500.

Around 24 hours before kickoff, I looked at countless predictions for my game. And as I suppose real gamblers at this stage tend to do, I took each agreeing argument to heart — and actively scoffed at contrary opinions.

So I click my $1,000 play, look at the screen, get within one button of finalizing and — wait, where does it say that I have this second-chance bet if I lose?

About halfway between mild concern and hyperventilating, I remember the promo page’s advice: “If you have a question, don’t hesitate to ask.”

So I selected the “call” option, and heard a real live human on my phone telling me, “Yes, you are confirmed for the promotion.”

That’s good — but now I don’t want to even think about what happens if this bet loses, since the money would disappear entirely if I go 0-for-2.

Where to watch, and with whom?

Next decision: NFL Red Zone on the couch or a foray to a local sports bar that has most or all of the games on their various televisions?

Another item: Do I watch this game with friends or family, or go solo?

With more than a modest fear of morphing from Bruce Banner into The Incredible Hulk if a bad bounce goes against me, I firmly choose the latter.

The fatalist in me briefly mulls putting $1,000 into a different account and going $1,000 the opposite way. That would allow me to walk away with a $91 loss, and no need to even watch the game.

Then I realize how dumb that would be. I might win, after all. Just another reminder of how much I am in over my head — in spite of this being an affordable loss, as I described above.

Game time nears … and the pick is made

The sentiment as my head hits the pillow on Saturday night is definitely “unease.”

Logically, I have “nothing to lose, and everything to gain” on Sunday. And again, this is an amount I can afford to lose next weekend with the second-chance bet, if it comes down to that.

But awakening on the morning of the game, I have a vague sense of a prisoner being walked slowly to the gas chamber. Whatever a “gambler’s high” might be, this for damn sure isn’t it.

Had I bet $10,000 — an amount I would notice missing on my next bank statement — I’d almost be paralyzed with fear. Maybe high stakes are not for me. This feels way too much like the fabled Running of the Bulls in Pamplona, Spain. And with two loser picks, while I wouldn’t be fatally wounded, I sure would feel the horns.

When you’re at this point, it’s time to just make your pick. And, in this case, I went with the New England Patriots getting 3 1/2 points in Miami vs. the Dolphins. Week 1, the Hall of Fame coach beats the rookie coach, right?

And here’s the kickoff….

My sense is that my game might be the dullest of all on Sunday, and with a field goal to play with on my side, I elect to stick with my usual plan of watching NFL Red Zone and praying that I go as long as possible without seeing a single Dolphins highlight as the clock keeps ticking.

Some much-needed rain falls on my worried head as I make a quick run to the store before kickoff, and it feels for all the world like a harbinger. If this were a rollercoaster, I’d be that guy waving at the ride operator to stop the thing right before we hit the first hill.

Don’t think that works, either.

Just as game time nears, I get somewhat concerning family news. Two minutes later, I see the Meadowlands crowd belting out the national anthem in honor of the 9/11 anniversary. A couple of sobering reality checks, and ones that I suppose I badly need at this point.

So here we go:

First “highlight” is of a pass by Patriots quarterback Mac Jones into the end zone. Strong deflection by the Dolphins defender that goes sideways — and right into the arms of a Miami teammate, who runs the ball out almost 30 yards. Really?

A few minutes later, the Dolphins are around midfield, 4th-and-1, going for it, and the Patriots hand them a first down with a neutral zone infraction. Really?

Thankfully, the Dolphins quickly fumble it away — only to have another bit of good fortune as the ball bounces to an offensive lineman, and the Dolphins get their field goal after all. Really?

Jones at his own 10-yard line, he fumbles — and there is another Hollywood Hop for Miami for the dreaded “scoop-and-score,” and it’s 10-0 in the second quarter. Really?

Finally, just before the half, Miami has 4th-and-7 on the New England 42 and the CBS announcer says, “I don’t really love this call” of going for it. Me, neither, after a first-down reception becomes a 42-yard TD with 18 seconds left for a 17-0 Miami lead.

Fast forward to a 20-7 final and, yes, I am out a cool $1,000. But only for 48 hours or less, the Caesars employee has assured me. I’ll be back to $1,000 in my account, and next week I can make another pick. And if it wins, I’m back to even and I can pretend this whole nightmare never happened.

I was really dreading the need for a sequel to this story, but I have a number of ideas for how to handle this situation in Week 2 — so stay tuned.