Ex-WFAN Host Craig Carton: Could He Handle Return To A More Gambling-Centric Broadcast?

Reports are that Craig Carton, a recovering compulsive gambler, could be back on the air in a changed WFAN sports betting environment.

Several recent reports strongly suggest that former WFAN morning drive host Craig Carton, who shared a microphone with ex-NFL quarterback Boomer Esiason from 2007-17, will soon be returning to the station on weekday afternoons.

The timing is interesting, in light of the HBO special about Carton to first air on HBO at 9 p.m. Wednesday ET. The show is called Wild Card: The Downfall of a Radio Loudmouth. (A trailer can be seen here.)

Carton, a confessed compulsive gambler who in 2018 was convicted of securities fraud and wire fraud related to a Ponzi scheme over concert tickets, would face a changed landscape upon returning to the 50,000-watt New York City-area channel.

Just a few months before he was convicted, the U.S. Supreme Court struck down a 26-year-old federal law that had limited legal sports betting almost exclusively to Nevada.

With all states suddenly able to pass their own sports betting laws, New Jersey acted quickly. By mid-2018, sportsbooks had opened in most Atlantic City casinos and at two state racetracks.

New Jersey also permits mobile sports betting, and the fierce battle for market share inevitably has led to rampant advertising on WFAN and other media platforms.

So if Carton were to land a mid-afternoon time slot, he could find himself finishing his show and handing things over to the Odds On Sports program — 30 minutes of daily gambling advice offered since August by host John Jastremski and his guests and callers. The show is sponsored by DraftKings.

On Monday, an exuberant Jastremski immediately focused on the “heavy juice” on the Yankees-Rays opening playoff series. He told his gambling-focused audience — as well as those sports fans listening who don’t place wagers — that the line on the Yankees for Game 1 had changed during the day from -127 to -152.

Next up was talk about the shifting point spread on the Packers-Falcons football game, followed by Jastremski’s amazement at nearly 60% of the NFL game point totals going “Over” the oddsmakers’ betting lines this season. The opening segment concluded with talk about the series odds in the Lakers-Heat NBA Finals.

After a break, former journeyman NFL offensive lineman Ross Tucker, who has more than 200,000 Twitter followers. joined for his nightly guest spot to talk about the two Monday Night Football games.

Tucker liked the Patriots and Falcons, neither of which covered the point spread. Jastremski hit with his Yankees pick, but also missed with the Falcons while touting the Marlins on Tuesday at +190 in their unsuccessful playoff opener against the Braves.

Callers “Tony” and “Jeff Money” wrapped up the show by touting their own picks.

Even the callers are “all-in” these days

Gambling talk on WFAN these days is not confined to Jastremski’s show.

The segment began with Roberts complimenting Banks for his handling of agitated caller “Richard in Manhattan” in the post-game radio show after Sunday’s Giants-Rams game. The caller was upset that the Giants, trailing 17-9, did not kick a field goal on 4th-and-11 with just a few minutes left in the game.

Benigno, aware that the Giants were getting more than eight points at all sportsbooks, concluded — likely correctly — that the caller “must have had a three-team parlay, something like that.”

A long commercial break not so coincidentally included a spot about the Carton HBO documentary — one of two that aired in that hour. Another commercial touted a new Radio.com podcast providing “fantasy football and sports betting tips.”

A third commercial in the same break came from FanDuel, describing itself as the only sportsbook to offer “single-game parlays.” New signups were told they could receive up to $1,000 in site credits.

The last of the three callers who closed out the hour was “Ozzie from Wood-Ridge,” a regular who offered the sage advice to “always bet the over” on games involving the Dallas Cowboys.

Carton has some backers

Could a recovering compulsive gambler survive unscathed in such an environment? After all, Carton is rumored as a possible replacement for the 67-year-old Benigno.

Would Roberts and Banks banter as easily about the gambling-minded caller if Carton had been part of the discussion instead of Benigno?

“I think Craig is very aware of his own situation,” Dunn told NJ Advance Media recently. “He has never been against legalized gambling; he has always been very open about the fact he supports legalized gambling. He just knows it isn’t for him.”

Director Marie McGovern told Newsday.com that she and Dunn were struck by the change in Carton’s demeanor after serving just over a year in prison.

“We saw a grown-up, in all honesty,” McGovern said. “When he came out from prison, he came out a man and a person who all of a sudden looked around and said, ‘Oh my actions impact other people.’”

Jamie Salsburg, the founder of the After Gambling blog and podcast and a recovering compulsive gambler, hopes that Carton’s frankness about his downward spiral resonates with his fans in a way that the troubles of a “stranger” might not.

Salsburg told njonlinegambling.com Monday that the issue of Carton and WFAN is not cut-and-dried.

“Conventional wisdom would say ‘Yes, the current media landscape is no place for someone with a gambling problem,’ given the proliferation of advertising,” Salsburg said.
“However, I think there is more nuance to the discussion, and ultimately each individual needs to determine whether it is an environment that they feel will be healthy for them. I know of dealers that attend [Gamblers Anonymous]  and I’m sure there are bartenders that attend [Alcoholics Anonymous], so I don’t see Craig’s return to the air as an easy black-and-white decision.
“The reality is that there is a growing over-saturation of gambling content and ads in the sports media,” Salsburg added.
“If Craig feels returning is something he can safely do — and it will likely be made easier, given all the eyeballs watching him — then I think it would be great, as I can’t think of a better person to deliver the reminder of the importance of safe gambling practices than him. His presence alone would help balance the wall-to-wall gambling ads and coverage.”
Share on facebook
Facebook
Share on twitter
Twitter
Share on email
Email 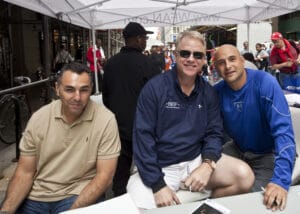