Tropicana Casino has enjoyed a comfortable position in the New Jersey online gambling market. One of the first regulated online casinos in the state, the site has also been one of the most successful and remains so thanks in no small part to its strong association with land-based partner Tropicana Casino and Resort in Atlantic City.

These days, the brick and mortar Trop is proving no slouch either, having climbed back from the brink of obscurity to become one of the boardwalk city’s best comeback stories.

Tropicana Casino and Resort has been an established property in Atlantic City for more than three decades. The resort was popular and successful for most of that time, but following major expansions in the early 2000s followed by trouble with new owners and layoffs, the property wound up losing its license in 2007.

Tropicana was rescued out of bankruptcy in 2009 by a group of lenders led by Carl Icahn, and has since been restored to a popular and lucrative location.

In the last several years a number of renovation projects costing tens of millions of dollars each year have significantly upgraded the property. Improvements were made to the hotel rooms, new restaurants and amenities added to the resort, and a high-stakes slot area was developed on the casino floor.

In 2013, contrary to fears that online gambling could further deplete activity for brick-and-mortar casinos, Tropicana (along with British billionaire Richard Branson’s Virgin Group) helped champion the argument that a partnership between existing Atlantic City casinos and online gaming sites would be vital to the survival of the industry.

As a result TropicanaCasino.com launched in the first wave of sites in November of that year, with sister site VirginCasino.com following two months later in January of 2014.

Building on the strength of the Tropicana brand and aided by a reliably generous promotion cycle, Tropicana Casino has been a solid and stable success. Since launch Tropicana and Virgin have generated more than $142 million in online casino revenue, comfortably in third place in the market and less than 5% below  second-place Borgata Casino.

The brick-and-mortar Tropicana has similarly and steadfastly thrived in that time, continuing to stay profitable when several other Atlantic City properties struggled against a devastating downfall. Annual revenues for last year were reported at $390 million, a 15% improvement over 2016 making Tropicana the second-place casino in Atlantic City. 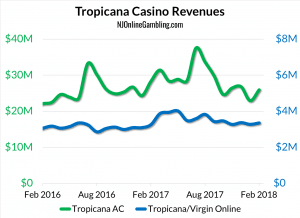 Some concerns remain for the future, as new properties are expected to open in Atlantic City creating increased competition. The Hard Rock Casino and Ocean Resort Casino may both be opened by summer of 2018, bringing the total number of casinos in the city from seven to nine.

Not to mention, recently the Showboat Hotel also began the process of attempting to regain its casino license.

The additional rivals are unlikely to significantly threaten the success of an established brand like Tropicana. If the market should prove overstuffed then it’s the newcomers who are most likely to struggle. In particular, Ocean Resort will face a tough battle, as it lacks brand recognition and is reopening a space that once occupied a spectacular failure (Revel).

The realistic risk, though, is that the recent period of growth may be curtailed. The surviving properties benefited significantly from the casino closures from 2014-2016, so while proven brands are under no major threat a continued upward trend will be harder to maintain.

This is less likely to be a problem for the online Tropicana. While both Hard Rock and Ocean Resort are expected to launch casino websites, the internet market does not yet appear to have reached oversaturation, and Tropicana Casino revenues have remained dependable despite other recent new competition.

Scores Casino and playMGM both entered the market last August, and more recently Party Casino enjoyed a semi-relaunch. Yet throughout all of this Tropicana/Virgin’s monthly revenues remained extremely close to its $3.3 million average of the last two years.