Why You Should Be Playing These Three New NetEnt Slots, Found At NJ Online Casinos

We spotlight three new and visually stunning NetEnt slots and explain why you should be playing them right now.

Most NJ online casino progressive slot players are likely familiar with Divine Fortune, the popular jackpot game created by software maker NetEnt. After all, the slot is offered at a variety of the state’s iGaming sites, and is responsible for more jackpot payouts than any other game in the industry’s history. Currently, the jackpot is an industry record $285k on Play SugarHouse.

But while Divine Fortune seems to grab all the headlines, there are plenty of other NetEnt games offering the same level of fun and excitement, albeit with a lower maximum payout potential. In fact, the Sweden-based firm continually releases some of the online casino world’s most well-designed and creative titles.

Here we spotlight three of the company’s most recent slots, and explain why you should give them a spin.

Released just last month, Wild-O-Tron is fresh off the NetEnt assembly line, and is currently only available in NJ at Borgata affiliated casinos.

The slot boasts a retro-futuristic theme, with gameplay taking place inside what appears to be a metallic scientific laboratory.

The base symbols are made up of seven different types of robots, each painted their own color. The most lucrative is the red robot, while the lowest paying machine boasts a striking resemblance to Wall-E, the beloved 3D-generated robot featured in the Pixar film of the same name.

Unlike other slots, even slots offered by NetEnt itself, Wild-O-Tron keeps things extremely simple. There are no Free Spins Bonuses, nor are there special Pick’em bonus games. Instead, players hope to trigger the Wild-O-Tron feature, which turns all occurrences of between one and six robot symbols Wild. 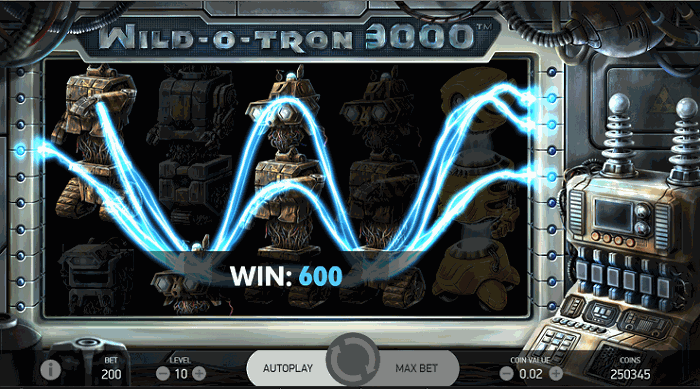 Activating the feature is easy enough; the Wild-O-Tron energy machine can be switched on immediately after any random spin. When that happens, electricity shoots onto the reels turning certain symbols Wild. After the Wilds are chosen, the reels spin again. Hopefully, once they come to a stop, several of the wilds will appear on screen, boosting payouts according to the paytable.

Believe it or not, before 100-payline slot machines with extravagant 3D animated, multilevel Bonus Games were created, most slots featured just a handful of symbols and one lonely payline. And while they were extremely basic, most players were OK with that.

Wild-O-Tron’s impressive graphics hide the fact that, at heart, the slot is very simple. For beginners, and players who don’t especially enjoy making sense of slots with complex Bonus Games, Wild-O-Tron could be the perfect fit.

Simply choose your coin value, select a Multiplier, hit spin and hope to activate the Wild-O-Tron feature. Once the ensuing wilds create winning matches on screen, just collect your winnings – it’s as simple as that!

This game has a generous theoretical return of 96.01%.

Lost relics is a visually stunning slot which brings back memories of one of the greatest adventure films of all time: Indiana Jones. The title was released in May of this year and can be found on Golden Nugget Casino, along with a few other NJ casino sites.

In the game, you’ll try to dig up valuable artifacts by spinning the reels and make matches out of hearts, spades, clubs, diamonds, daggers, Roman helmets, bracelets and rubies. 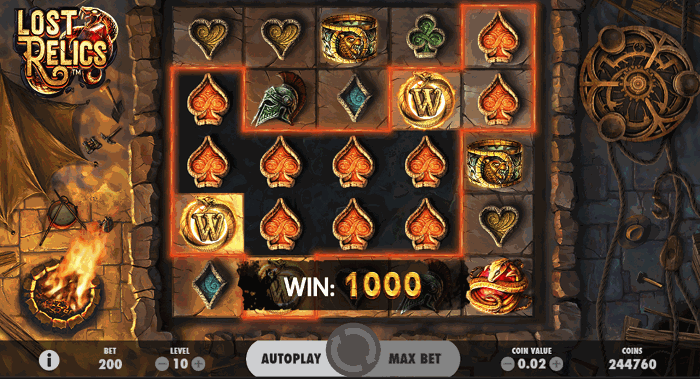 Lost Relics diverges from traditional slots by doing away with paylines and paying out wins when the same symbols appear in clusters.

Lost relics comes with a bevy of special features and surprises, accompanied by some pretty impressive animations. During the base game, players can benefit from one of three features, triggered at random:

When three Scatter symbols appear on reels 1, 3 and 5, a Free Spins Bonus round of 10 Free Games is awarded.

The Free Spins Bonus in Lost Relics is especially lucrative in that, after each spin, a treasure chest can be revealed from under the floorboard. There are three types of chests – small, medium and large – which can payout Coin Wins, additional Free Spins or give Sticky Wilds, which remain on the reels for the duration of the round.

Lost Relics, like many NetEnt slots, offers players above average value, with a return to player percentage (RTP) of 96.3%.

But higher than normal RTP isn’t the only reason to play a game, if it was keno wouldn’t exist. First of all, Lost Relics is masterfully designed, and, with its professionally produced soundtrack, provides a cinematic experience normally reserved for the movie theater.

Lastly, the slot boasts not one, but three base game features, plus a unique Free Spins Bonus, all of which will keep you on your toes and engaged at all times.

It’s immediately evident that much time and effort was poured into designing this gorgeous five-reel, 20-line slot. In fact, it might be worth it to play the game to experience the graphics alone. For those concerned about payback percentage, the game offers a slightly above average RTP of 96.31%.

Asgardian Stones is steeped in Norse mythology, featuring tiles comprised of stone faced gods with glowing symbols pulsating on their foreheads. Behind the reel set in the distance sits in ancient and exquisite palace.

Players will notice that, apart from the intricately designed regular-sized symbols, Colossal Symbols the size of four, or even nine, tiles also regularly appear on screen. These not only help create winning matches, but can multiply wins as well. Each time a winning match is registered, the symbols involved are crushed, with new ones taking their place. If a Colossal Symbol falls, it begins crushing the symbols underneath. For each row that is crushed, a Multiplier is awarded, up to 4x. 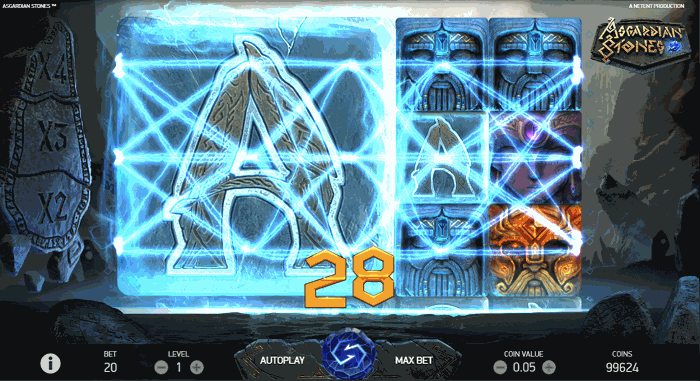 The final bonus opportunity comes in the form of a Free Spins Bonus Round, activated if Free Spins are awarded via the Bonus Wheel. Up to 15 Free Spins can be won, during which Wild symbols can take on some interesting forms. Colossal Wilds can potentially fall during this round, while Wild symbols that are not part of a win will stick to the reels during subsequent spins.

In addition, the game’s multitude of bonus features, like the 15-max Free Spins Bonus, and exciting base game features, like cascading symbols, will not leave gamers disappointed. The unique Colossal Symbols and fun Bonus Wheel mechanics round out the title to make it a can’t-miss game.

NetEnt is one of the most creative slot makers in the business. Not only have they created a breakout jackpot-slot hit in Divine Fortune, but boast a large library of sleek and beautifully designed traditional slots. The next time you’re on the hunt for a new game, we highly recommend one of the titles above, which will no doubt keep you coming back for more.