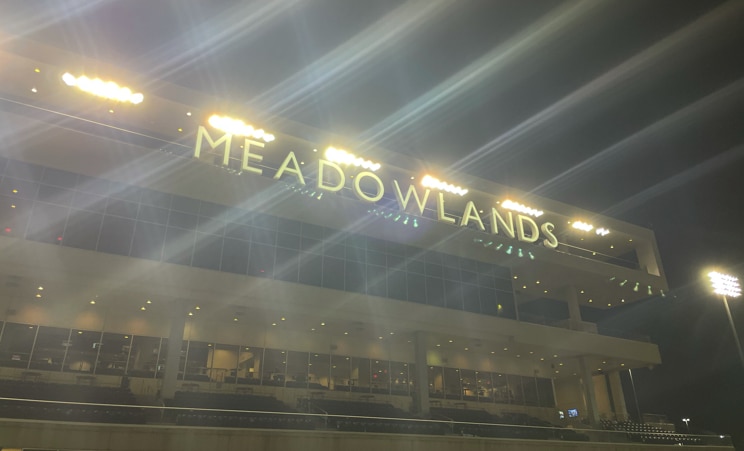 The weather has been unkind at times for the annual “Monmouth-at-Meadowlands” meet, but on Saturday the foreboding cloud cover did not lead to another postponement. Instead, all six races took place on the turf, as the fourth of seven thoroughbred cards at The Big M this month.

The uncertainty of those clouds no doubt contributed to a “railbird crowd” in the single digits for the start of the first race, with turf races on the inside portion of the track also taking away from the feeling of thundering hooves down the stretch for races on the dirt.

The first race underscored a point that Monmouth operator Dennis Drazin has made about fixed-odds wagering being added to the menu. The new betting is only for win, place, and show bets — which, as many are not aware, account for only about a third of all bets. In that first race, for instance, about $58,000 was wagered on exactas and $43,000 on trifectas in the nine-horse field, while win bets were about $56,000 and place and show bets each were well below $10,000 each. 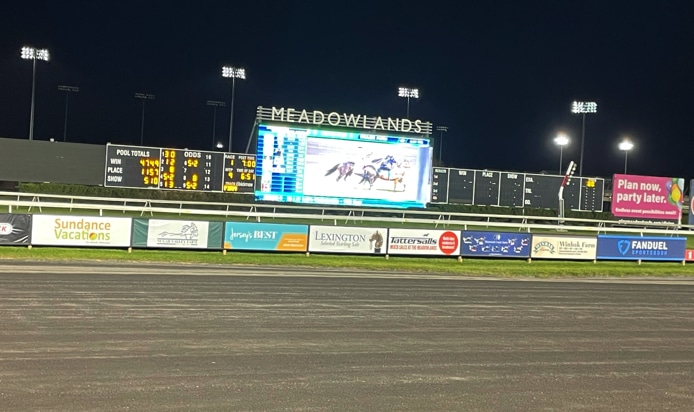 The thoroughbreds will be back at the Meadowlands on Friday but not Saturday, which will be the last dark weekend night at the track until Christmas Eve and Christmas.

The off night on Saturday is because Monmouth instead is running its one-day steeplechase meet at Far Hills in Somerset County that day. The event was a victim of the pandemic in 2020 in what would have been the 100th version of the event, which now features legal wagering.

Harness racing, the staple of the East Rutherford track, ends a three-week hiatus on Oct. 22. Then, on Oct. 23 and Oct. 30 (both Saturdays), both breeds will race, thanks to a compromise reached between Meadowlands operator Jeff Gural and Monmouth Park counterpart Dennis Drazin.

The thoroughbreds had state racing commission approval to race on all Friday and Saturday nights in October, but then the Meadowlands gained the right to host the prestigious Breeders Crown races later this month. So Drazin agreed to forego racing on the last two Friday nights of the month, and to let the standardbreds race on the dirt on both Saturdays with a post time of noon compared to the 7 p.m. post for the thoroughbreds.

“We asked them [about Saturday nights] and they said ‘no’ — and under the law, they have the right to race from the day after the Hambletonian to December 12th,” Gural told harnessracingupdate.com. “So, they don’t have to let us race at all.”

Breeders Crown eliminations will be Friday night, with the finals on the following Friday — with Saturday afternoon harness racing on both weekends as well. The shift to daytime may prove a boon to the all-sources handle, as that timing opens up the cards to Europeans,  who in many cases are five to six hours ahead on the clock.

Drazin told NJ Online Gambling that while there will be a several-hour gap between the end of the day card and the start of the evening version, he thinks there will be those who make a long day of it.

“If someone is winning, they may want to keep going. And if they lose, they get another chance,” Drazin said.

FanDuel Sportsbook is back — sort of

A plethora of sports bettors at the FanDuel Sportsbook at the Meadowlands on Saturday night was a welcome sight, but things aren’t quite back to normal. 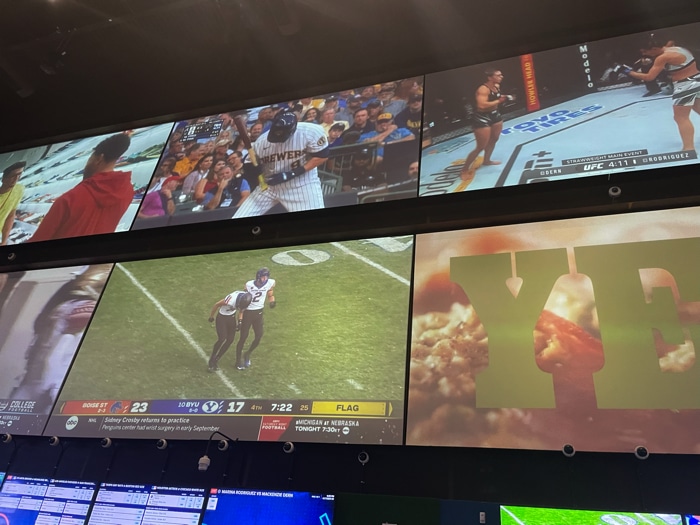 A little secret of the sportsbook is that there is second-floor seating available that offers a panoramic view of both the six giant screens below, and also the crowd at the bar. In the “witching hour” on NFL Sundays — roughly between 3:15 p.m. and 4:15 p.m. — the second floor can provide superb people-watching, as bettors roar and moan at multiple games that are close, whether in terms of real score or point spread. But with a reluctance to have too many people crowded together in the COVID-19 era, gamblers must reserve a table to get a place on the second floor.

Mask-wearing was spotty throughout the track area, but the size of the grandstand was sufficient to prevent potentially dangerous overcrowding.