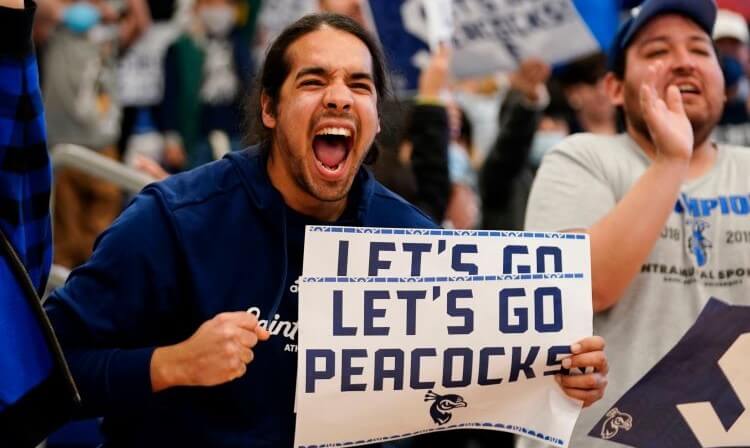 In the modern era of the 64-team NCAA men’s basketball March Madness that began in 1985, St. Peter’s University has become only the third No. 15 seed to pull off consecutive upsets and reach the Sweet 16.

Only one seed worse than 11th has ever advanced beyond two rounds: 12th-seeded Missouri, which reached the Elite Eight 20 years ago.

So is there any reason to believe that the St. Peter’s Peacocks are a decent bet to continue their Cinderella story after downing Kentucky and Murray State? There might be a few.

First, the Wells Fargo Center location for the East Region’s next two rounds is favorable for St. Peter’s, which easily is the closest school to Philadelphia of the four still playing.

Next up for the Peacocks is No. 3 seed Purdue on Friday night. An unprecedented third-round win by a 15-seed would lead St. Peter’s to an Elite Eight matchup with either No. 4 UCLA or No. 8 North Carolina. The Tar Heels helpfully toppled top-seeded, defending champion Baylor in the second round.

The absence of the No. 1 seed could be even more important to the Peacocks’ future than geography, though the latter figures to give St. Peter’s at least a fighting chance of having the largest number of fans in the building on Friday. Neutral ticket buyers from the Philadelphia area also are liable to feel an affinity for the plucky Peacocks from a neighboring state.

The Peacocks’ fans in New Jersey can’t place a legal bet on them in Jersey City or anywhere else in the state. But they have a manageable option in that the campus is a short bus ride or PATH train ride away from Manhattan, and online sports betting launched in January in New York state.

For newcomers, the eight legal sportsbooks in New York — among them DraftKings, FanDuel, Caesars, BetMGM, and PointsBet — have impressive sign-up bonuses. It’s worth reading the fine print on each offer or checking with a gambling-minded friend who can guide you through the opportunities.

For a fan attending the games in Philadelphia who neglected to sign up with an app beforehand in New York, Pennsylvania also offers legal mobile sports betting with many of the same companies offering similar bonuses.

For those able to place a bet as of Tuesday, oddsmakers generally listed St. Peter’s as about a 12.5-point underdog. On the moneyline, those successfully predicting an upset could win at least six times their wager, with FanDuel, for example, offering St. Peter’s to win at +640.

And should more Madness ensue …

If the Jersey City school does the seemingly impossible and reaches the Final Four, the semifinal game next on April 2 would figure to be an even more daunting task than last week’s opening-round upset of No. 2 seed Kentucky.

That because the opponent would be the survivor who wins two games in a loaded West Region field of No. 1 overall seed Gonzaga plus 2-seed Duke, 3-seed Texas Tech, and 4-seed Arkansas.

Still dreaming? The most likely opponent in a title game, based on top surviving seeds in the other side of the draw so far, would be No. 1 seeds Arizona or Kansas, or No. 2 seed Villanova.