If a European on holiday in Manhattan last week took a glorious 15-minute ferry ride from Battery Park to the front gates of Liberty National Golf Club in Jersey City, that person might have wondered where the betting kiosks were for wagering on this Northern Trust opening playoff event of the FedEx Cup.

Any adult guest was free to wager, both pre-round and with in-tournament live bets, each day. The catch was that in the Garden State, the only brick-and-mortar locations are at the Meadowlands Racetrack and Monmouth Park (and someday Freehold Raceway, perhaps) plus eight Atlantic City casinos.

So the opportunities are more subtle. One hint was that when you bought a ticket on StubHub, there was an offer by Australian-based, Jersey-certified PointsBet for a $100 “free” bet with as little as a $10 deposit.

Once you got through the gates, however, no signs of betting activity were immediately evident. None of the spectators interviewed at the Grey Goose 19th Hole hospitality area on Friday seemed aware of the option.

Well, one millennial who had just arrived by ferry said he was aware that you could bet on your phone in New Jersey, but it took his pal to remind him that, even with the Statue of Liberty looming large in the background along with the Manhattan skyline, this was Jersey.

Another patron proudly noted his friend had gotten a sweet “10,000-to-1” bet on steady veteran Webb Simpson — a reminder that for the countless newcomers to legal sports betting, a “+10,000” is going to appear on the surface to be just that if the bettor doesn’t understand the lingo.

FD at the NT

With a little more digging, though — and thanks to a tip from the “10,000-to-1” fellow — we discovered that there was in fact some sports-betting-related signage on site.

And there was more good news, after that long walk: The FanDuel location was part of “The First Round Beer Garden” — a reference not to Thursday’s golf, but, well, you get the picture. There was food available, too. (The “Penthouse on 14” looked like an alluring viewing perch, but that was only for Northern Trust insiders and other hoi polloi).

Swing by The First Round Beer Garden presented by @FanDuel.

The view doesn't get much better! pic.twitter.com/kfGSEdnz96

No press release previewing this option came to my email inbox; this promotion was as low key as the William Hill Lounge that debuted at the Prudential Center last year for Devils hockey games, concerts, and family shows. In both cases, staff was on hand to help anyone interested download the sports betting operator’s app on their smartphone as well as to explain a few of the basics.

One fellow at the Northern Trust signed up and asked his crew if they also wanted in. One pal called himself a “degenerate” and came aboard, but the rest of the crew clearly was eager to get back on the course to watch their favorite golfers in action.

FanDuel had “closest to the pin” and hole-in-one wagers for that nearby par-3 14th hole each day, and a spokesman added that “if you place a closes- to-pin wager on-site, FanDuel has a VIP viewing area to watch your bet live and in real time.”

But a company representative at the Beer Garden noted that “consumer awareness” both of the betting and its legality in New Jersey was not terribly high.

(Still, this was the first of the numerous spots on the course I saw where you could get a free small tube of sunscreen, and that helps.) 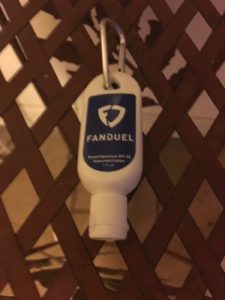 As it happens, it’s DraftKings — FanDuel’s arch rival in the daily fantasy sports space and now a fellow key player for sports betting in New Jersey and beyond — that has the official imprimatur of the PGA Tour.

DraftKings has offered a playoff contest in its online sportsbook where, with a $25 bet on a player to win the three-week playoff, if your golfer missed the cut on Friday (or, presumably, withdrew after one round like Tiger Woods did), you got a $10 credit toward a second player to win it all instead.

Sports betting-minded New Yorkers who settled for making legal bets in Jersey City last weekend might hope that, by next summer, their state has rolled out the wagering for them for this event.

Not only is that a reach given Governor Andrew Cuomo’s stiff opposition, this tournament moves to Boston next year.

In 2021, the Northern Trust event returns right back to Liberty National. But New York could get its shot with next summer’s U.S. Open at Winged Foot Golf Club in Mamaroneck.