Once again PokerStars NJ has wrapped up its Winter Series, and like last year’s inaugural event, it was quite successful.

This makes two out of two years that this series has been executed to near-perfect precision, proving itself to be one of the few highlights of late in the downtrodden NJ online poker market.

As with last year, not a single event required an overlay as participation was either accurately predicted by the operator or in some cases very conservatively underestimated. Of note: 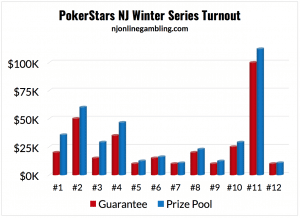 Admittedly, guarantees aren’t always the best indicator of a series’ success. Therefore we turn to year-on-year performance for a clearer picture.

Growth from Year One

Much of the series’ success is owed to PokerStars ability to effectively market and host a tournament series. Encouraged by last year’s results, the operator chose to be more aggressive in its guarantees, thus making them more attractive to players, but not hoisting them so much that mass overlays would result. In the end, we see a small but satisfying increase.

Noteworthy is the fact that last year’s main event became the first PokerStars run tournament in New Jersey outside of a COOP event to reach a prize pool of $100k. Consequently this year’s was planned with $100k guaranteed, one of the only a few six-figure events in the market, and managed to reach $112K, yet another modest but well-planned gain.

Ignoring the guarantees, the actual total series haul grew by 9% year over year, with the main event awarding 10% more than last year. This is also in spite of continued overall liquidity declines, currently down 27% year-over-year.

PokerStars NJ’s continued ability to host these series with very few mistakes is a testament to its expertise in assessing the limited market’s potential. While the increase in scope from last year was a very small one it paid off, with Stars neither squandering the opportunity to show growth nor extending itself too far with excess ambition.

Last year, there was some speculation that the Winter Series benefitted from the increased Atlantic City traffic resulting from the Borgata hosting the World Poker Tour’s Winter Poker Open. However, this year it appears that the Winter Series events held before the World Poker Open began on Tuesday did much better than those that overlapped with the Open, implying that either the coinciding real world event was not beneficial, or that the novelty of the series was a big draw during its first few days.

It appears the PokerStars NJ cash traffic improved slightly during the series, indicating increasing benefits from running such series. One line of logic dictates that during heavy tournament periods, players would be distracted from playing cash, but at least in the case of New Jersey’s market (which has continued to slowly decline in overall cash performance year after year but is becoming more and more known for success at series like this one) it seems overflow from events to cash play is growing steadily more reliable.

PokerStars NJ has not announced its next major series yet, but it will likely be the 2018 NJSCOOP. Last year’s NJSCOOP was not estimated quite as perfectly as the Winter Series, with 9 of the 70 events requiring overlays, but that is a much more ambitious series with typically more than four times the total pool of the more conservative Winter Series.

What we’ll really be interested in seeing is how PokerStars manages to grow that series despite the general decline of the market.