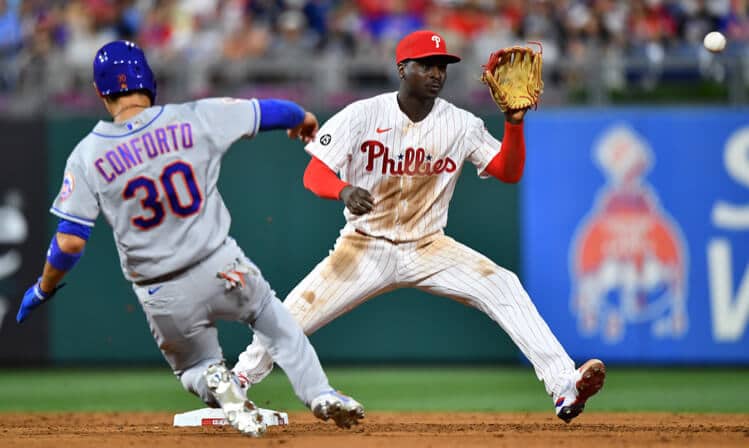 With their ninth straight victory — and their 16th in their last 18 games — the steamrolling Braves moved to five games ahead of the Phillies and seven ahead of the seemingly collapsed Mets, who’d held a four-game lead in the division just three weeks earlier.

According to FanGraphs, Atlanta stood 78.3% likely to win the division at that point, with the Phillies at 17.2% and the Mets reduced to a mere 4.5%.

But a week and a half later, this is suddenly a race again. Maybe even a three-way race.

The Braves went from the softest part of their schedule to the hardest and went 2-6 against the playoff-bound trio of the New York Yankees, San Francisco Giants, and L.A. Dodgers before pulling out a win in Colorado Thursday night. The Phillies have gone 6-3 in that same span, with their offense coming alive of late to score at least seven runs in each of their last seven games. And the Mets have discovered the joy of playing the Nats and Marlins and won five straight.

Heading into Labor Day weekend, the Phillies are just two games out of first and the Mets are a theoretically manageable five out. The Braves’ likelihood of winning the East has fallen 10 percentage points, to 68.1%. The Phillies’ chances have improved nearly 10 points, to 26.9%. And the Mets’ probability … well, it hasn’t changed much, but 5% is about five points higher than where Mets fans were mentally a week ago.

And if you believe those percentages, it means there’s a tiny little bit of value in betting on Philly to finish the season in first place. Unfortunately for Mets believers (or boo-lievers), there’s no value to be found on them as of Friday morning.

new Mets rallying cry, after a 5-run 9th, has to be: "YOU GOTTA BOOLIEVE!" https://t.co/aoBkZsmLjO

DK doesn’t see Braves as such a sure thing

Surveying the landscape of New Jersey’s legal online sportsbooks, we see that the Braves are still the clear favorite, at prices ranging as high as -357 at Caesars Sportsbook and as low as -245 at DraftKings.

DraftKings is the most optimistic about the Phillies’ chances, currently taking bets at +250 on the Fightins. That means DK is not the place to wager if you want to put some money on Bryce Harper and company. You can get a +300 return at Caesars, BetMGM, and any book powered by Kambi, such as the newly added Barstool Sportsbook. If indeed they have a 26.9% chance of cashing, that means their true odds should be +272.

As of Thursday night, the Mets could be found at some NJ online sportsbooks at an attractive +2000, but either the Mets backers hit that number hard or the bookmakers recalculated on their own. Either way, the best price you’ll now find on the team from Queens is +1600 at FanDuel Sportsbook, whereas numerous other books have them a ridiculously underpriced +800. Their true odds, if you trust the FanGraphs calculation, should be +1900.

One key to determining how and whether to wager is remaining strength of schedule and the extent to which you trust either the Braves or Phillies to beat up on bad teams.

Based purely on opponents’ winning percentage, the Phils have the third-easiest remaining schedule in MLB, behind the Cincinnati Reds and Pittsburgh Pirates, at .464. The Braves aren’t far behind at .478. The Mets, meanwhile, face a .499 collection of foes.

With 29 games to go, the Phils have just six remaining against teams currently in playoff position: three at Milwaukee, and three at the end of September in Atlanta. Otherwise, they play Miami six times; the Pirates four times; the Orioles, Cubs, and Mets thrice each; and four games at home against the Rockies, who are a .652 team in Colorado but only a .265 team on the road.

Atlanta plays three more this weekend in Colorado against those tough-at-home Rockies, but that’s balanced with three home games against them in mid-September. Otherwise, the Braves’ tough spots are three games in San Francisco, three in San Diego (whether the Padres will be in the Wild Card hunt at that point is uncertain), and three at home against the Phils. They figure to feast on the Nats, Marlins, and Diamondbacks before finishing the season against the possibly-eliminated-by-then Mets.

Speaking of those Mets, their remaining schedule features — in the “easy” column — five against the Nats and seven against the Marlins. In the “not so easy” column are series against the Phillies, Braves, Yankees, Red Sox, Cardinals, and Brewers.

If you’re betting on the Mets, you’re betting on something close to a miracle, as in order to make up five games on the Braves and three on the Phillies, with both rivals probable to go over .500 the rest of the way, New York likely needs to go at least 21-8 down the stretch to have a shot. Going 6-0 against Atlanta and Philly might be required.

If you do want to bet on the Mets, though, now is the time to do it — and same for the Phillies. With the Mets playing Washington this weekend and the Phils playing Miami, while the Braves have a tougher series in Colorado, both chasers are more likely to gain ground before Labor Day than to lose ground, and thus their odds could shrink over the next three days.

On a side note, Bryce Harper’s NL MVP odds have held fairly steady over the past month, and after a 10-homer/10-double/21-walk August, he’s now tops in MLB in OPS at 1.007 — 0.004 ahead of NL MVP frontrunner Fernando Tatis Jr. of the Padres.

Tatis is between a -278 and -313 favorite, while Harper is as low as 7/1 at DraftKings and as high as +850 at Unibet and other Kambi sportsbooks in New Jersey. Meanwhile, the Braves’ Freddie Freeman and the Dodgers’ Max Muncy lurk as high as +1000.

Two things almost certainly have to happen for Harper to get the award over Tatis: The Phillies have to make the playoffs, and the Padres have to miss them.

Including their Wild Card chances, the Phils are given a 34.7% chance of making the playoffs. The slumping Padres now have a 75.2% chance of missing them. There’s about a 26% chance of both happening. But for Harper to get it over Freeman, the Phillies probably have to top the Braves for the division title. The combined chance of that happening and San Diego missing the postseason is more like 20%.

And of course, Harper needs to keep putting up big numbers. But for the Phillies to win the division, doesn’t he almost have to?

What we’re saying is, at +850, there just might be a hint of value in the Phils’ star right fielder.