The NJ online poker market experienced a shakeup of seismic proportions last month, solely due to the enactment of a shared liquidity pact between 888-branded sites in New Jersey, Nevada, and Delaware.

Revenue on Caesars-affiliated sites in New Jersey (WSOP.com and 888 Poker) soared, from a low point of $449,426 in April to $770,348 in May, vaulting overall NJ online poker revenue to….well, a significant year-over-year loss.

Cannibalization the name of the game

Caesars may be the new king of online poker in the Garden State, but its revenue appeared to be siphoned entirely from its competitors. A comparison to last May shows that while Caesars revenue was up a whopping 41.6% thanks to the May 1 launch of shared liquidity, total revenue in the state took a 9.0% nosedive, from $2,119,885 to $1,929,693.

Borgata networked sites took the brunt of the blow, with revenue dipping 27.8% to an all-time low of $442,677. PokerStars NJ too was heavily impacted, as revenue fell nearly $246k to $716,668 (-25.6%). It didn’t mark a historic low for the former market leader, but it was its second lowest full-month tally since entering the US market in March 2016. 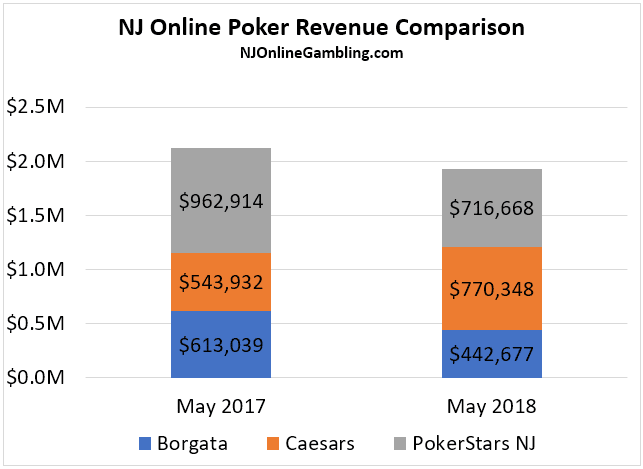 While it’s still far too early to tell how shared liquidity will impact the NJ market long-term, the early signs aren’t exactly favorable.

Fact is, the hype associated with the merge should have catapulted online poker activity to at least an annual high. Instead, revenue was lower in May than it was in both January and March.

By contrast, we note that when PokerStars NJ debuted, it did grow the market, with overall revenue soaring 30.4% to $2.59 million from April 2015 to April 2016. However, revenue quickly slipped back below the $2 million mark by June 2016 and hasn’t eclipsed that figure since last August.

We might see a similar trajectory in the coming months. June will likely be a high point for both WSOP.com and the industry at large, due primarily to the running of the live Series in Las Vegas, the ongoing $3 million guaranteed Online Championships, and three more online bracelet events. Early July also should see above average numbers, as there will be plenty of qualifiers running for the WSOP Main Event and tons of cash game activity originating from Nevada.

But what happens after that? If revenue was down 9.0% y/y during the debut month of shared liquidity — when hype is at its peak — then it’s safe to assume that it will be down by an even larger number by the time the dog days of August roll around. Sure, WSOP.com revenue will still likely be up, but the overall outlook for online poker in New Jersey is grim.

It feels like both PokerStars NJ and Borgata networked sites are temporarily phoning it in, content to let WSOP.com have its moment in the sun. And to a degree that’s fair, as they may see limited upside in the U.S. until online poker becomes a reality in Pennsylvania and other states.

Going further, Borgata appears to have redirected its efforts almost entirely to its suddenly blossoming online casino network. In just the past few months, the operator has given its flagship site a facelift, launched PartyCasino NJ under its license, and debuted the attractive Live Dealer format. The recent makeover has been reflected in Borgata’s revenue figures with casino win spiking to over $4 million in April and setting an all-time high of $4.14 million in May.

WSOP.com/888 may have been top dog in New Jersey, but we feel its revenue was stifled by technical headaches and a few odd decisions regarding its recurring tournament schedule. Some of these problems, like the broken loyalty program, have been resolved, but if there’s any real hope of the network emerging as a $1-million-a-month entity, the software has to stop partying like it’s 2004.

It’s become fairly evident already that shared liquidity will not be a boon for NJ online poker. Instead, it appears that its primary significance was in shaking up the market’s hierarchy, with 888-branded sites moving from worst to first.

However, this does not mean new interstate compacts will have the same lackluster impact on revenue. Remember, so far 888-branded sites in New Jersey have only increased their population reach by a few million. Granted, Nevada has a good deal of poker tourism, but that’s pretty much offset by the virtual nonexistence of online poker players in Delaware.

When Pennsylvania enters the fray, we are more likely to see a stronger and sustained uptick. Reason being, Pennsylvania is home to nearly 13 million residents and an above average prevalence of poker players. But perhaps even more importantly, existing NJ operators will be incentivized to participate, creating a competitive atmosphere that should reflect across state lines.

Not to mention, license holders may push online poker harder in PA than in NJ because they’ll be forking over 54 cents on the dollar for slots as opposed to just 16 cents for poker. That alone might be enough for operators to make their motto “Shuffle up and deal.”