Both sports wagering handle and the online casino revenue in the state came close to symbolic big numbers.

Gamblers in New Jersey increased their sports wagering totals for a seventh straight month in December — but not quite enough to reach what would have been a milestone figure.

Still, a U.S. record of $996.3 million was gambled on sports, according to state Division of Gaming Enforcement figures released Wednesday. That is up from $931.6 million in November, which had become the record then.

The total “handle” for the calendar year was $6 billion (counting wagering on future events such as 2021 Super Bowl winners), with the sportsbooks online and at state racetracks and Atlantic City casinos achieving a “hold” of 6.6% of that money, or $393.2 million.

More than one-fifth of that handle was wagered on multi-game parlays, which returned a smooth 15.7% to the books.

The lowest margin of win for the books was on basketball, at just 3.2%. Football (4.1%) and basketball (4.7%) also produced modest net revenue, underscoring why parlay betting is so highly touted on many mobile sportsbooks.

A shade over 93% of New Jersey bets in 2020 came via online/mobile devices. The COVID-19 pandemic kept many away from racetracks and casinos even after they reopened this summer.

Sports betting produced $50 million in state revenue for the calendar year — $46.8 million at a 13% mobile betting tax rate, and $3.2 million from an 8% in-person casino or racetrack tax rate.

While the $6 billion in wagers averages out to $500 million per month, none of the last 10 months — that is, the COVID era — had an amount anywhere similar to that number.

The betting volume was close to that amount in January ($540 million ) and February ($495 million). Then sports practically disappeared in mid-March, and all the Ukrainian table tennis, Belarusian soccer and similar opportunities in the world couldn’t save the handle.

Oh, what a second half

July proved a transitional month, rallying to get up to $315 million, but August’s $668 million in bets hinted that there was no stopping this locomotive.

September brought another $749 million in bets, October was $803 million, and November $932 million before December’s oh-so-close $996 million.

Bettors proved “sharp-er” in November, so the sportsbook revenues were down about $8 million in that month compared to October’s $58.5 million.

The books bounced back in December, hauling in a record $66 million.

Another record was set last month in online casino gaming revenue — $99.5 million, which like the sports betting handle came just shy of a magic number.

The $1 billion in sports wagers and $100 million in casino revenue  mileposts figure to be achieved sometime in 2021. But with far fewer NFL and NCAA football games in January, will that be the month for the new betting handle record? 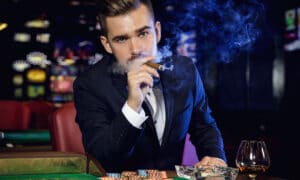