The long-running battle between the horsemen and the sports leagues took a turn Tuesday at a Third Circuit Court of Appeals.

A U.S. Third Circuit Court of Appeals three-judge panel on Tuesday provided a victory for New Jersey’s thoroughbred horsemen, vacating a lower court’s ruling that had dismissed their bid to claim millions in damages from the NFL and other sports organizations in the long-running sports betting saga.

And in a remarkable twist in a remarkable saga that dates back to even before New Jersey voters approved such betting in 2011, this becomes the third 2-1 split sports betting verdict by a panel on the Third Circuit — which, like most circuit courts, typically finds a path to unanimity.

“It’s nice when a plan comes together,” a pleased Dennis Drazin, who operates Monmouth Park for the New Jersey Thoroughbred Horsemen’s Association, told NJ Online Gambling. “At some point, maybe the leagues will listen to me.”

The previous 2-1 sports betting rulings over the years went in favor of the leagues (NFL, MLB, NBA, NHL, and NCAA), leading the horsemen to appeal to the U.S. Supreme Court — their last chance — both times. After getting passed over on the first try, the horsemen had better luck with the court in 2017, leading to a landmark May 2018 voiding of the Professional and Amateur Sports Protection Act of 1992 that had prevented 49 states from offering full-scale sports betting that Nevada has offered for 70 years.

But this time, the case simply goes back to U.S. District Court Judge Michael Shipp, who 10 months ago had dismissed even the relatively modest $3.4 mm bond claim by the horsemen.

The rest of the $150 mm in the headline would come if the horsemen can convince Shipp that they deserve far greater compensation for being stymied for four years, not just the few weeks that the bond had been designed to cover — and if so, if that is the amount they deserve.

Both Shipp and dissenting judge David Porter seemed to have gotten stuck on the same point: that when Shipp issued the temporary restraining order (TRO) in 2014, he was merely following the direction of his superiors on the Third Circuit at the time.

That viewpoint, wrote Judge Marjorie Rendell for the majority along with colleague Theodore McKee, “conflates whether [the horsemen’s association] was ‘wrongfully enjoined,’ with whether the District Court abused its discretion in issuing the TRO.

“Whether a party is wrongfully enjoined depends upon whether it turns out that that party had a right all along to conduct the activity it was enjoined from doing,” added Rendell, who as it happens I watched at work in Philadelphia just last week in the Phil Ivey vs. Borgata edge-sorting case. “The entire concept of ‘wrongfully enjoined’ envisions a look back from the ultimate conclusion of the case: Should the enjoined party have been permitted to do what it was prevented from doing? Thus, whether a party was wrongfully enjoined depends upon the final judgment on the merits.

“Did it turn out that NJTHA had the right all along to do what they were enjoined from doing? There is no way that the answer to that question could be ‘no.'”

Porter, the dissenter, countered in his writing:

Shipp never even addressed the possibility of damages far beyond the $3.4 mm bond figure, so neither did the Third Circuit panel. As Rendell said at oral argument in July, “We’re a reviewing court. We don’t address avoided issues.”

Drazin said he hopes that Judge Shipp will now permit “discovery” in the case, thereby allowing each side to probe for evidence for their cause. One possibility if that happens is for the heavily redacted depositions of sports league commissioners and top executives be unsealed, to see if there is reason to believe that the lawsuit against New Jersey was entered “in bad faith.”

“I’m happy about the ruling, and it is consistent with the vibes I got from Judge Rendell during oral argument,” said Drazin, a lifelong horseman. “She knows this case.”

Indeed; it was Rendell who wrote the majority opinion in 2017 representing the views of her and Judge Maryanne Trump Barry (the President’s sister) that ultimately was overturned by the U.S. Supreme Court in May 2018.

Finally, Rendell couldn’t resist kicking off the 30-page opinion in this fashion: “Temporary restraining orders are not always a sure bet.” 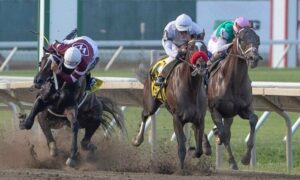 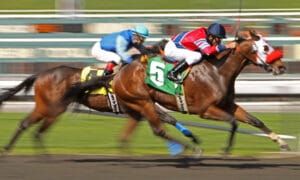