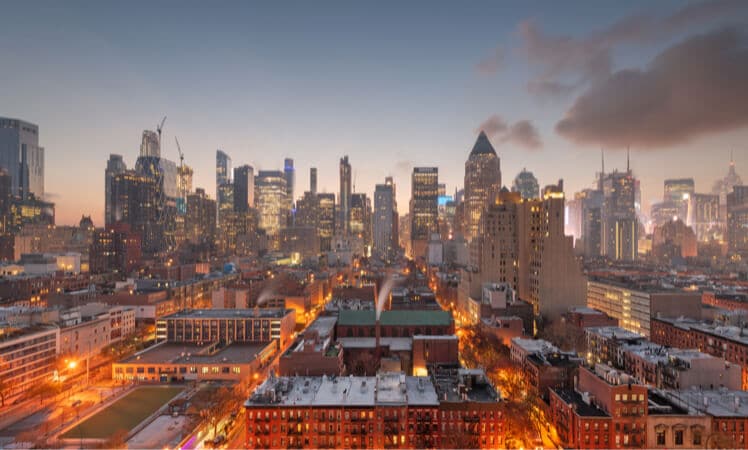 New Jersey taxpayers have enjoyed a bit of a free ride since mid-2018, thanks to neighboring New York’s failure to launch mobile sports betting.

That has led New Yorkers to cross the Hudson River in droves, with estimates of up to $1.5 billion of the $6 billion wagered in New Jersey last year coming from those visitors. Betting handle for the four upstate New York casinos — none of them within 90 miles of midtown Manhattan — was a paltry $98 million, as a five-month closure due to the COVID-19 pandemic left New York legal gamblers with no place to go but across the river.

It also meant roughly $50 million in bonus tax revenue for New Jersey in 2020, off $400 million in gross sports betting revenue.

But Monday night’s revelation by the New York State Gaming Commission of six formal bids to be mobile sports betting “platform providers” served as a reminder that free rides do come to an end.

Regulators have set a goal of the Super Bowl in February for the first mobile sports bets to be taken in New York — although oddsmakers don’t expect the New Jersey-residing New York Giants or Jets to be participating.

The most eye-opening team of bidders is one headed by BetFair Interactive, owner of FanDuel Sportsbook, which hooked up with arch rival DraftKings as well as BetMGM and Bally’s and, reportedly, four sports franchises plus a TV network.

BREAKING: @Yankees, @BuffaloBills, @BuffaloSabres, @NYCFC and @YESNetwork join forces with DraftKings, FanDuel, BetMGM, Ballys and Seneca Nation on a super bid for online sports betting in New York. Exclusive by @EvanDrellich (with insights from me): https://t.co/2nxPPeEZSV

Penn Sports Interactive (presumably led by its Barstool Sports brand) and Fanatics are involved in another bid, while Canada-based theScore (which was just acquired last week by Penn National), bet365, and FOX Bet each appear to be going it alone.

It’s notable how many New York sports franchises do not yet appear to be involved: the Mets, the Nets, and Madison Square Garden teammates the Knicks and Rangers. However, the other franchises are not listed on the specific bid, either, so these teams might be involved silently at this stage.

The New York Racing Association previously announced it would not be part of any bids.

According to the gaming commission’s 130-page Request for Applications, oral presentations by bidders could begin as soon as Sept. 1.

Then potential winners will be notified by Dec. 6, with any amendments to such bids due a week later. Licenses would then be awarded pending approval by the board at the next commission meeting, presumably in December or January.

At least two “platform providers” are to be chosen, according to the commission, with a minimum of four sportsbooks as partners. The commission strongly recommends a tax rate at a minimum of 50%.

While that is quadruple what online sportsbooks pay in New Jersey, the sheer size of New York and the prestige of being an operator in that state — which could impress regulators down the road in even bigger states such as Texas and California — figured to make it not too dear a price for operators to pay.

Candidates can achieve up to 75 points on a variety of technical factors, including previous experience in the field and quality of the mobile platforms — with a minimum of 60 points needed to qualify. All of the candidates seemingly can meet that standard, but the “mega bid” featuring the Seneca tribe receives a bonus 5 points for their inclusion in the bid.

A 50% tax rate is worth another 25 points, with an extra point scored for each percentage point offered above 50%. The process seems weighted in favor of whichever bid offers the highest rax rate to the state.

Each platform licensee — who will receive a 10-year term — must then pay $25 million for the privilege within 30 days of approval.