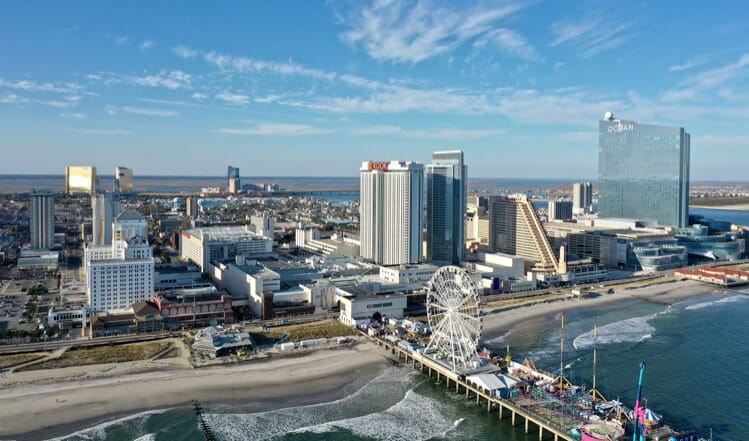 David Rebuck, the director of New Jersey’s Division of Gaming Enforcement for the past decade, recently appeared on the weekly “Gamble On” podcast to discuss sports betting and online casino issues — including how the latter launched in 2013, as well as the division’s stance on sportsbooks limiting “sharp bettors.”

“As a regulator, I made a commitment to Governor [Chris] Christie, and also to Governor [Phil] Murphy, that New Jersey is going to be the leader in the [sports betting] industry,” Rebuck said in the midst of a 30-minute interview. “My mission is that we’re always going to be that top dog, and if you’re going to hold yourself out as the top regulator, the top overseer, and be at that pinnacle, then you’d better deliver on that promise.

“The only way you can deliver is making sure your staff understands the mission and how we need to work together to push the envelope. And not just handle, but the leader in the industry in the U.S. — and even worldwide — to tell people how to effectively oversee this industry. If you measure success just by handle, then I think you are missing the big picture.”

Still, handle is the most eye-catching number, Rebuck acknowledged.

How New Jersey got to be No. 1

“New Jersey should not be the leader in U.S. sports betting handle, although there are various reasons why,” added Rebuck, a longtime assistant state attorney general who aided Christie on his transition team before being nominated for his current role. “There are other states with millions and millions of more people, and they should be in a strong position to surpass New Jersey in the future. I fully expect somebody to pass us in handle, and they should.”

Rebuck has joked that he could take on a similar role someday in California, which has four times the population of New Jersey, “and I guarantee you that we’ll pass New Jersey in a heartbeat. But I don’t like California, so I’ll probably just stay here in New Jersey and keep us doing as well as we can for a while.”

Rebuck mentioned numerous current and former DGE employees as playing crucial roles in New Jersey’s success in new forms of gambling, and he cited his adult children as proof that he needs such assistance.

“They can’t believe somebody that inept at technology could be involved in this industry,” Rebuck said of himself. “I’m like the conductor — I rely heavily on a wonderful staff that sees things that I don’t.”

Many in the small number of professional sports bettors in the state have complained about sportsbooks setting absurdly low limits on them once they demonstrate a consistent pattern of success.

Unless Joe is an agent of the NJDGE he does not have the authority to reject your action. NJSA 5:12-100e. They can not exclude you. Nor can they set a low maximum bet without NJDGE approval.

Rebuck laid out a firm demarcation between banning an expert player and setting limits.

“Some operators have definitely put restrictions in to limit people because, essentially, they don’t want their business,” Rebuck said. “But they know they can’t ban them — the rules don’t allow them to do that. They are making a commercial decision where they say, ‘OK, this guy has been beating us and beating us and beating us, and we don’t know why. So we’re going to just be more conservative in what we allow that person to wager.’

“My response [to limited gamblers] is, ‘Basically, you have 30 other websites you can go to, to see what you can do.'”

He then added, “I hear about it, but I don’t know if it’s as big an issue as others make it out to be. And I say that for this reason — because if there’s that many people that are successful at sports betting, then the sports wagering companies shouldn’t be making all the money they are making. I’m sure there are some people that are very skilled and very talented at what they do. But I think there’s some ‘puffing’ by others that you’re really not that good and, by the end of the day, you’re just breaking even or making a little bit of money.

“It’s really not an issue that I’m deeply concerned about, unless I get a sense that [sportsbooks] have overstepped their bounds and are banning somebody for a ‘non-reason.’ And we haven’t had too many of those situations. If I’m wrong, we’ll deal with it on a case-by-case basis.”

The birth of online casino in NJ

Back in 2012, the state legislature and Christie gave DGE nine months to launch online casino gaming even though it was nearly virgin territory in the U.S. Nevada had just begun offering only online poker, and Delaware also was in the online casino development stage, but with the state lottery as a sole operator.

“It was a challenge, a big challenge, because we were fearful of developing a system that eventually failed,” Rebuck said.

Care had to be taken not to run afoul of the Wire Act, a six-decade-old federal law that prohibits interstate gambling activity. Hence, if a New Yorker could access New Jersey’s online sites from their homes, trouble would ensue.

Meanwhile, those in the payment-processing community, including credit card companies and banks, “were leery of people gambling online,” Rebuck said.

Rebuck said he and his staff met with operators and regulators in European countries that had more than a decade’s head start on U.S. states regarding online casino gambling.

“The challenge we had was that it would have been very easy to flip a switch and allow for the only gambling that was going on in Europe to go on in New Jersey,” Rebuck said. “But we made a decision early on that that wasn’t going to happen. The European market was engaged in procedures that their culture and norms would permit, and U.S. and Jersey culture would not. Essentially, we had to develop a new system. We made some mistakes, but overall I think it worked well for us. We had a great staff that had some long nights and long days where it was very stressful.”

As for the nine-month timetable, Rebuck noted that one CEO of a “very large international casino company” told him, “You’re never going to get this done.”

Finally, Rebuck recalled that he and Governor Christie took heat for roundly ridiculed assumptions about projected annual online casino gaming revenue for 2013 and 2014. Christie’s team assumed $1.1 billion in online casino gaming revenues per fiscal year — a number that, even as of 2016, had not quite reached $200 million. But exponential growth in ensuing years has led to that exact $1.1 billion revenue figure being achieved just in the first 10 months of 2021.

“Whoever made that estimate, they were right,” Rebuck said.