Industry finally will have a uniform rule as of July 1 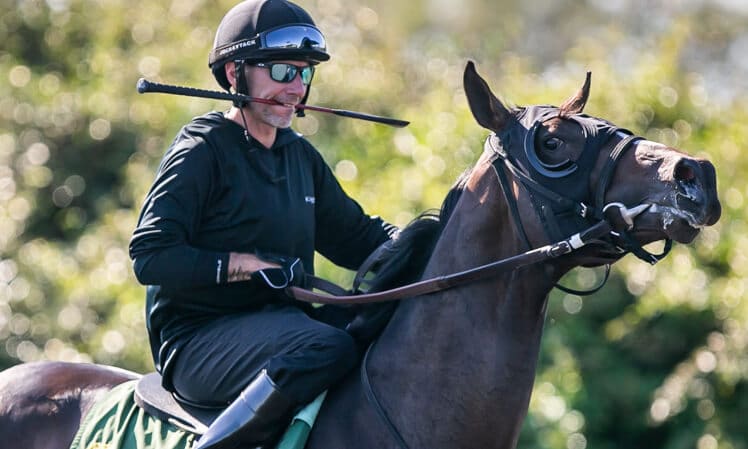 By a 5-1 vote on Friday, the New Jersey Racing Commission decided to waive the restrictive riding crop rule that was met with widespread criticism upon its implementation a year ago. That means Monmouth Park — the state’s lone thoroughbred racetrack and therefore the track most impacted by the rule — instead will operate under a crop rule that aligns with federal Horseracing Integrity and Safety Authority (HISA) guidelines starting on opening day, May 7.

HISA crop rules go into effect nationwide on July 1 in an effort to create uniform rules for racetracks. With the waiver, Monmouth Park does not have to start the 62-date meet with a different crop rule before transitioning to a new crop rule midway through the calendar.

The new “house rules” that were approved for Monmouth Park allow jockeys to strike a horse six times per race, with no more than two in succession before a horse has a chance to respond. There is no limit on underhanded strikes.

“We are grateful to the New Jersey Racing Commission members for giving up their time to hold a special meeting on an issue that is important to the entire industry,” Dennis Drazin, CEO and chairman of Darby Development, which operates Monmouth Park, said in a statement. “The commission recognized that uniformity on crop rules is paramount to our success and to the integrity of our product. The wagering public and our fans will benefit knowing that we are once again operating under the same rules as other racetracks.”

Under the old rule that was in place for last year’s Monmouth Park meeting, crops were only allowed to be used for safety reasons — and even that exception was a concession by the commission after it initially banned jockeys from even possessing riding crops.

Monmouth Park reported a decrease in handle last year, with track officials suggesting that the loss of some jockeys and concerns by the betting public about the rule were part of the reason for the decline.

Jockeys’ Guild CEO Terry Meyocks told the Bloodhorse that the track’s proposed penalties for violating riders were “harsh.” The guild had its lawsuit against the riding crop rule dismissed recently, opening the door for state thoroughbred horsemen to make a direct appeal to the commission.

“Riding in races is a dangerous sport — jocks know that, and everybody knows it — and we have to do everything we can do to protect horse and rider,” Meyocks said. “The people making these decisions haven’t been in that position, for the most part.”

It’s amazing that as an industry we have placed so much focus and energy on whip regulations when there are so many other major issues that this time could be put into. That would benefit horse, rider, owner, all of horse racing. You all creating problems where they don’t exist.

Rule change too late to lure Jersey Joe back

The change in rules has come too late to lure back legendary jockey “Jersey Joe” Bravo, a 13-time Monmouth Park racing meet champion. Bravo departed last spring in frustration over the rule, relocating to Santa Anita in southern California.

“California is where I’m living and riding. That’s it,” Bravo told The Asbury Park Press. “I’ve been riding there all winter, and on Saturday and Sunday I’ll be back at Santa Anita. Home was always Monmouth Park and home is the Jersey Shore. It is a shame how everything unfolded.”

The controversial rule came up after the Oceanport track’s signature race, The Haskell, last summer. Hot Rod Charlie was disqualified after finishing first, with Mandaloun elevated to the top spot. Hot Rod Charlie was found to have interfered with Midnight Bourbon down the stretch, unseating Midnight Bourbon’s jockey, Paco Lopez — although Lopez escaped significant injury.

Jockey Flavien Prat, who was aboard Hot Rod Charlie, suggested that his inability to use his whip contributed to the incident, while Drazin told NJ Online Gambling at the time that the claim was unfounded.

“If he had to hit the horse once, nothing would have happened” in terms of a risk of disqualification, Drazin said. “It was just his error in judgment.” 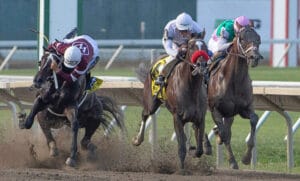 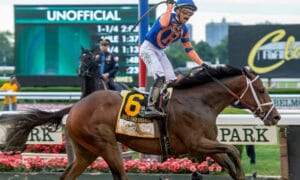