The budget presented by the legislature to Gov. Murphy directs $15 million to the state's equine industry, a familiar number to the horsemen.

The scheduled $20 million annual New Jersey horse racing purse subsidy that was to last for five years didn’t quite make it into Year 3.

That figure was granted to the industry for 2019 and 2020, but the budget presented by the legislature that Gov. Phil Murphy plans to sign today directs $15 million instead to the state’s equine industry.

“We are very appreciative that the governor has seen fit to include us in the budget,” Drazin told NJ Online Gambling Tuesday. “Everyone got cut in some way, but this is enough to keep us competitive and to keep going with the 13,000 jobs in the state from the industry.”

“We reserved money, and should manage,” said Meadowlands Racetrack owner Jeff Gural. “We appreciate the support from the governor and from legislators.”

Drazin said that proportions of the subsidy remain the same. That means that Monmouth Park’s 50% share is reduced to $7.5 million.

On the harness racing side, the other $7.5 million will be distributed as follows (with 2019-2020 levels in parentheses): $4.5 million to the Meadowlands Racetrack (from $6 million); $1.2 million to Freehold Raceway (from $1.6 million); and $900,000 split equally between purse subsidies for New Jersey-sired horses and for breeders awards purses (from $1.2 million).

The $15 million is the same subsidy level that the industry received a decade ago, until Gov. Chris Christie ended the program because he said the industry had to prove it could survive independently.

While there were significant staff reductions, pay cuts, and fewer race dates with smaller purses, the most dire predictions at the time — that the industry would be shut down for good — did not pan out.

Drazin said that overall, the horsemen are stronger now than before and that the $15 million would suffice given the pandemic environment.

Once the COVID-19 crisis led to shutdowns of all racetracks in mid-March, Drazin said that his staff budgeted for a summer and fall meet with no fans at all.

“Instead, we wound up being allowed up to 4,000 fans, and that brought us in some extra revenue,” Drazin said.

The better-than-expected circumstances have allowed for a nine-day fall meet beginning with Preakness Day on Saturday.

(Some) fans back at Monmouth Park

The 4,000-person limit — which Drazin said was the largest at any U.S. racetrack — has not been a major detriment, as many visitors have shown up mainly just to place bets on races or sporting events before departing.

Preakness Day might have attracted up to 10,000 fans under normal circumstances, Drazin said, adding that many locals have adjusted to the new era and will elect to stay home this year.

There have been no positive COVID-19 tests at the track this summer, Drazin said, and horsemen who travel to certain states still have to be quarantined for 14 days upon return.

The horse racing subsidy was not included in the preliminary budget announced in late August.

That led Gural to say at the time, “It’s a disaster for the industry and would be catastrophic, no two ways about it. It would cost thousands of jobs and be devastating for breeders. We have a month to convince the governor and legislators not to eliminate the subsidy.”

No time to panic

But Drazin said last month, “I think it’s premature to comment, really” — and he was right.

AJ Sabath, an advisor to the Standardbred Breeders & Owners Association of New Jersey, also focused on the positive last month.

“The governor proposed what he wanted the budget to look like from his vantage point,” Sabath wrote in a letter to the horsemen. “I want to reassure you that this is only the beginning of the budget process. The budget is now in the hands of the legislature.

“Between now and the September 30th budget deadline, the legislature will be negotiating their own budget with the governor. Legislative leaders have their own budget priorities with the power to add and remove what is in the final budget.”

Racing at Monmouth takes place as usual on Saturday and Sunday this weekend, then switches to Wednesdays and Saturdays through Oct. 24 — with a bonus Columbus Day card on Oct. 12.

The Meadowlands Racetrack and Freehold Raceway each will run on Fridays and Saturdays for the rest of 2020 (except for Christmas), with Freehold offering matinee cards and the Meadowlands as usual racing in the evenings.

The new budget also allocates $487,000 to compulsive gambling programs, with up to $250,000 in additional appropriations made available under certain conditions.

Another $1.1 million is appropriated for the state Division of Gaming Enforcement. 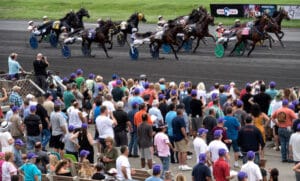 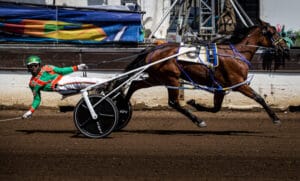