Not Your Father’s Generals: New Jersey’s USFL Team Given Long Odds For Success 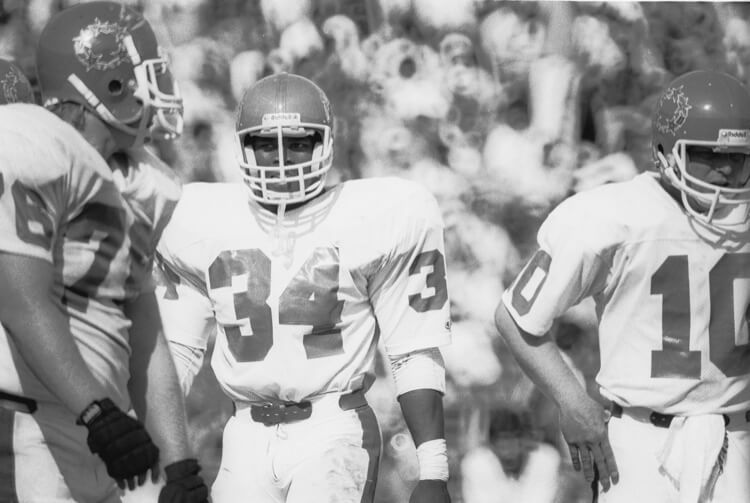 The New Jersey Generals of the United States Football League played at Giants Stadium from 1983-85 and featured star-studded lineups that included Heisman Trophy winners Herschel Walker and Doug Flutie and a controversial owner named Donald Trump, with most games airing on ABC or ESPN.

Crowds, for the most part, were in the 30,000 to 50,000 range in the 80,000-seat stadium. The Generals went 14-4 in 1984 and defeated the eventual champion Philadelphia Stars twice in the regular season, while finishing 11-7 in 1985 and getting eliminated in the postseason by the Stars for a second straight season.

The 2022 New Jersey Generals of the new USFL have … no star power. More importantly, all of their games — and, indeed, every USFL game — will be played in Birmingham, Alabama, until the playoffs.

Will New Jersey and New York fans with nostalgia for the original Generals take a liking to this version, given the lack of home games? Tailgating seemed to drive a good portion of ticket sales for those who attended Generals games back in the day.

Just in case, here’s a season preview ahead of the Generals’ opener at the Birmingham Stallions on Saturday (7:30 p.m. ET on NBC and FOX). The good news for the Generals is that the Stallions are considered by many prognosticators to the USFL’s second most feeble team, which is why the Generals are only +3 at DraftKings and other books. (All four games on opening weekend have odds of 2.5 to 4 points, reflecting understandable uncertainty among bookmakers.)

Caesars Sportsbook‘s futures odds are fairly typical of the betting market, with the Generals as the longest shot among eight teams to claim a league title at +900.

It hardly bodes well for any franchise when your inaugural first-round pick is a quarterback (Ben Holmes) who promptly gets injured and released.

That means the Generals will turn to either former Florida State signal-caller De’Andre Johnson or Luis Perez, whom you may not remember from his days at NCAA Division II powerhouse Texas A&M-Commerce; or from brief sideline stints with the Los Angeles Rams, Philadelphia Eagles, and Detroit Lions; or from playing time with the Alliance of American Football; or the last incarnation of the XFL.

But you may well remember head coach Mike Riley from his days with the San Diego Chargers, Nebraska, and Oregon State. Riley coached the AAF’s San Antonio Commanders (did this name give Daniel Snyder any ideas?) and was offensive coordinator for the XFL’s Seattle Dragons, while also having coached in the Canadian Football League and the long-forgotten World League of American Football.

Speaking of the Commanders and Dragons, Riley used running back Trey Williams on both squads and now has made Williams a General. Former Ohio State running back Mike Weber, whose NFL career hopes did not pan out, offers faint hope that he and Williams might be able to forge a serviceable backfield that makes the Generals competitive.

Wide receiver Alonzo Moore also is a former Commander and Dragon and a current General, but ex-Missouri pass catcher J’Mon Moore — who had a cup of coffee with the Green Bay Packers in 2018 — may be the go-to receiver in this offense.

What’s new in the new USFL

The new league features several rules tweaks that NFL management will look at closely — while pretending not to do so.

Among them is a rule that adds a three-point “point after” to a team’s options following a touchdown. That would be one play from the 10-yard line. This will be appealing to teams fighting large deficits as a way to try to scramble back into the game.

Speaking of which, the USFL version will allow a scoring team to skip the kickoff to their opponents and instead try to hold onto the ball by converting a 4th-and-12 play from their own 33-yard line. Lots of downside there, but this one might prove appealing to fans who want to see the underdog still have a fighting chance.

All kickoffs will be from the 25-yard line, not the 35. This will lead to fewer touchbacks and likely more dramatic plays. But the NFL cut back on this aspect because of concerns about serious injuries, so this one could backfire on the USFL.

The overtime rule also seems clunky, as teams will alternate offensive plays from the 2-yard line. Each team get three plays, and whichever team fares better will win. And each success in OT is worth two points, which could leave pro football bettors in the same boat as their college football gambling counterparts, who see their “under” point total wagers eviscerated by overtime points.

Pass interference will be more like the NCAA than NFL, eschewing the occasional 40-plus-yard bungled calls that occur in the NFL for a fixed-yardage penalty. The clock also stops after first downs during the final two minutes of each half, which could either make a game more exciting — or more ponderous.

The league is divided into two divisions of four teams each, using 1980s USFL team names in each case.

The North Division features the Generals, the Michigan Panthers (coached by longtime Oilers/Titans/Rams leader Jeff Fisher), the Philadelphia Stars, and the Pittsburgh Maulers. The South Division squads are the Stallions, the Houston Gamblers, the New Orleans Breakers, and Tampa Bay Bandits.

The 10-game schedule has each team meeting division rivals twice, with one game against each team in the other division. Four teams will reach the playoffs, which will be held at the Hall of Fame Stadium in Canton, Ohio, with semifinals on June 25 and the title game on July 3.