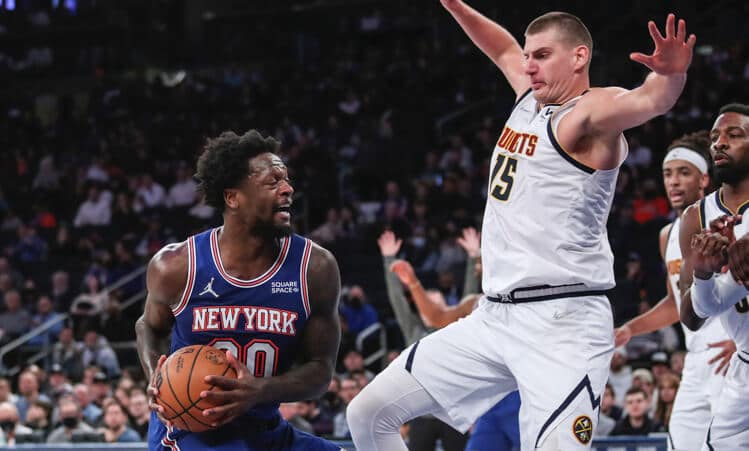 Jokic was in town a day ahead of the  Nuggets’ game against the New York Knicks at Madison Square Garden, and he owns standardbred horses in his native Serbia. The basketball star’s love for the sport stems from growing up on a farm and cleaning stalls at his local racetrack for several years. Jokic now owns his own farm.

“It was great to have Jokic at the track tonight,” said Meadowlands Racetrack General Manager Jason Settlemoir. “It was fun seeing him interact with our drivers in the paddock. I can see him becoming a great ambassador for our sport.”

In a brief TV interview, Jokic told Jessica Otten, “In Serbia, horse racing is not really a big sport. I’m enjoying being around the horses. It’s my first passion.”

Reigning @NBA MVP Nikola Jokić the center for @nuggets spent his Friday night at the Big M & @JessicaOtten1 had a chance to chat with him!

Jokic’s trip to the track was preceded by a visit with Hall of Famer Tim Tetrick, who said that Jokic began following him on Facebook a few months ago, and that he followed up by texting his interest in meeting up.

“He asked if he could come to the track [Friday night] and I said, ‘Sure. What do you want to do?’ And he said, ‘I want to hang out in the paddock with you and the other guys,’” Tetrick told Debbie Little for Harness Racing Update.

Legendary trainer Nifty Norman was on hand Friday night, and Tetrick joked of Jokic that “his eyes lit up like he was meeting Michael Jordan.”

“He’s fascinated by the business,” Norman reported. “That’s all he wanted to talk about. He was more fascinated by us than we were by him. … Basketball is how he makes a living and the horses are his passion — that’s basically what he said to me.”

Tetrick, who helped Jokic sign up for an online account, added, “Now he follows everything. He watched all the [recent] Breeders Crown races and texted me after every race. I got a thousand texts from him in the last two months.”

Nikola Jokic, on if he was inspired by going to watch harness racing at The Meadowlands last night before putting up 32 points, 11 rebounds and five assists today against the Knicks: pic.twitter.com/QAZF03isef

The Nuggets’ schedule offered fortunate timing for Jokic: The team was in Orlando on Wednesday night and then had two off days on the road before the visit to New York on Saturday. Jokic’s other visit to the New York/New Jersey area this season will be a Sunday, Dec. 19, game at the Brooklyn Nets, but the itinerary is trickier. The Nuggets are in Atlanta two nights earlier, so Jokic might find it challenging to catch the Meadowlands card in person on the Saturday night in between.

But by all accounts, Jokic is smitten by the sport. So if a 6-foot-11, 285-pound young man is spotted along the rail that night, it’s probably safe to assume it’s Jokic.