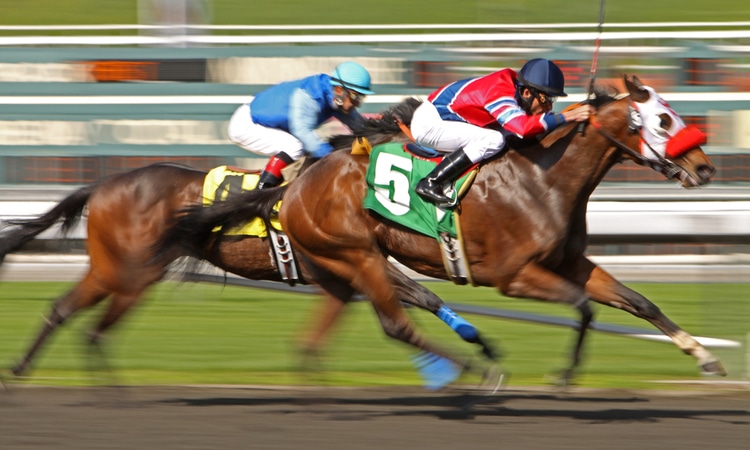 Memorial Day weekend seems like the ideal time for Monmouth Park to launch its annual summer meet, given that Gov. Phil Murphy has designated Friday — the track’s opening day — as the date for most COVID-19 restrictions to be lifted.

Track operator Dennis Drazin already had told njonlinegambling.com that he planned on having at least a 20,000-visitor capacity for the spacious, mostly outdoor Jersey Shore facility. That number is almost six times the 3,546 who were able to attend last year’s Opening Day. While the 20,000 might only be reached a few times, Drazin said, loosened restrictions could enable an ever larger capacity.

So what’s not to like? How about an apparent boycott attempt by leading jockeys on Opening Day as a way to try to force the hand of the New Jersey Racing Commission, whose new regulations greatly restrict the use of riding crops. The rules have infuriated many jockeys who call them a safety risk for both riders and the horses.

The threat of a boycott led track officials caught in the middle of a jockey vs. commission battle to fight back, suggesting that skipping Friday’s six-race twilight card would be crossing a line.

“It seems like an alleged non-boycott has become a boycott in my mind,” racing secretary John Heims told racing industry website bloodhorse.com. “We are not going to let people stick it to us and cost us money by canceling racing. If you feel unsafe Friday, how are you safe Saturday?”

After 51 horses entered last year’s Opening Day card, only 45 have done so this time. If enough jockeys either refuse to show up or are banned from the track, that would lead to even fewer entries and weaker fields. That could cause experienced horse racing players to set their sights, and dollars, on tracks in other states instead.

Joe Bravo, Monmouth Park’s leading jockey, already has announced he won’t be racing at the Oceanport track as long as the riding crop restrictions remain in effect.

The controversy is particularly frustrating for Drazin, who was aligned with the jockeys against a preliminary, draconian proposal against the use of whips. But he has since changed, noting that the final regulations permit jockeys to carry those riding crops — and to use them whenever they perceive a safety risk.

Drazin has hoped that jockeys would recognize that being banned at Monmouth Park could lead them to being banned in other states as well, threatening their livelihoods. But the jockeys’ collective anger about the rules — which they say came without their input — is palpable.

Several top jockeys are serving suspensions, and some entrants in the $100,000 Jersey Derby feature race do not yet have riders listed. But it won’t be long after the first race goes off at 5 p.m. Friday before the extent of the damage to the track’s quality of racing for the entire meet will begin to be determined.

There may be lawyers

On Tuesday, Drazin upped the ante by telling The Asbury Park Press that he received word that jockeys, including Bravo, may be trying to discourage colleagues from riding at Monmouth Park, with cash perhaps offered to them as an incentive.

“That kind of conduct is unacceptable and might even raise the eyebrows of investigators,” said Drazin, a personal-injury attorney when he is not running the state’s lone thoroughbred track.

And if the opening weekend card is truncated to any extent due to jockey holdouts, Drazin said he would be confident in winning a civil suit against those riders.

The new rules were put into place last September with a nod to appeasing critics, just after the Monmouth meet had ended.

“The prohibition of the use of riding crops, except when necessary for the safety of the horse or rider, will be perceived in a positive light by the general public,” the commission stated at the time. “The proposed repeal and new rules are of the utmost importance in adapting the industry to avoid the currently negative public perception of whipping a horse. … The public is essential to horse racing, and the industry must learn to adapt if it is to survive.”

The Jockeys’ Guild had its bid for an injunction against the new rules, pending the result of a legal fight, denied in April by a state court. At last week’s Racing Commission virtual meeting, a trainer asked if there was any way for the situation to be addressed before Opening Day. He was told that there was not.

Visitors to the track this summer will notice the removal of modest parking and entrance fees, except on Haskell Day on July 17. However, reserved seats will cost $5 and box seats $8, while programs will cost $4.

Attendees in the picnic area will no longer be able to bring in their own food and beverages. Tickets for an all-you-can-eat “Picnic Area Barbecue Buffet” are now available for $34.95 through Monmouth Park’s new deal with Seatgeek.com.

Along with savings for patrons from the end of parking and entry fees, track officials tout the $4 Miller High Life and PBR drafts ($2 on Fridays) plus $2 hot dogs that will be available every live racing day at the Shipwreck bar, located in the picnic area.

New Jersey craft beers from Screamin Hill, Toms River, Ross and Kane breweries will be featured in the Grandstand Level 1 Trackside area. Beer from those breweries will also be available in the newly renovated Dining Club (which now includes the Salvator Grille), at the Lady’s Secret Café, and in the parterre suites.

A new list of wines also will be available in the Dining Club, the parterres, and at Lady’s Secret Café. New Jersey-based winery Cedar Rose will debut its products at the track as well.