My two-day, 10-casino/racetrack tour of New Jersey late last week began with a whimper: a 7 a.m. arrival at Hard Rock Casino in Atlantic City on Thursday.

That included an eagle-eyed employee noticing me fumbling with my mask and — very politely but very clearly — making sure that I knew that it had to cover my nose as well as my mouth.

The tour ended on Friday night with not a whimper, but a bang — literally.

Storm clouds descended on the Meadowlands Racetrack as the card kicked off at 7:15 p.m., and in less than an hour a series of lightning bolts, with a little thunder as backup music, suspended the card for safety and later made for a hectic race to the finish.

The Meadowlands in any normal year has a wide entrance and, with no admission charge in recent years, no waiting.

But as every sentient being has noticed, 2020 is no normal year.

Rocky reopening at The Big M

As it happened, I arrived at the Meadowlands Racetrack right at post time (thanks in part to a missed turn that cost me three or four minutes and left me making a quick tour of my “Moby Dick,” the multi-billion dollar project called American Dream Meadowlands that I saw conceived in 2002, born in 2003, and “graduated” to a long-delayed opening last fall that didn’t even last six months before the pandemic struck).

But the main entrance was closed, and bettors could only enter at the simulcast entrance on the west side of the grandstand.

While the backup was only a few dozen patrons and the wait only turned out to be 15 minutes, it was a long 15 minutes.

All visitors had to fill out a “20 Questions” form about COVID-19, and nobody among this group had printed out a form beforehand. This led to nonexistent social distancing, confusion, and a shortage of writing implements.

Even worse was Hacking Cough Guy — who at least was wearing a mask — and even a “knucklehead,” in Gov. Phil Murphy’s parlance, in his 40s or 50s who showed up with no mask at all. (In North Jersey in particular, that is shocking behavior. In Bergen County, where East Rutherford and the track are located, more than 1,700 residents have already died from COVID-19.)

The knucklehead did not appear to be engaging in any sort of protest; he politely asked if track officials could provide him with a mask. He was told they would, but he didn’t receive the mask until at least 10 minutes later when he got to the airport-style metal detector.

That was unique in my tour of the eight Atlantic City casinos and two racetracks now taking in customers for the first time since mid-March.

An inside look at the Meadowlands

I earned a spot on line just ahead of Hacking Cough Guy and the knucklehead, but I eagerly waved them in front of me for obvious reasons.

Once inside the grandstand, there was plenty of breathing room. The outdoor seating was sectioned off to maintain social distancing, but that was not an issue given the size of the crowd.

For the second race, not even two dozen railbirds were present to watch the start and finish up close and personal.

The forecast of a nasty storm turned out to be accurate. That had me looking to walk back inside the grandstand, but those doors were locked from the outside. There was a “failure to communicate” with an employee who mysteriously gave me a tiny coupon on my way outside a few minutes earlier.

I finally found the lone way out — at the narrow entrance — and warned a security member that if it starts raining at any moment, there could be mass confusion. Fortunately, they told me that they were prepared to adjust and open the mysteriously closed doors.

To be clear, there was no lack of effort at the entrance to make it all work. But the need to hastily fill out a form and then go through security created an unfortunate if temporary hiccup.

Pro tip: Print out and fill out this form before each visit and then bring it to the entrance, to save time and hassle.

The FanDuel Sportsbook has reopened, with modifications. There was a narrow line along the near wall with only a couple of takers in this mostly sports-free environment. The main seating area was closed off, with just a small VIP area if there were any high rollers looking for a comfortable spot.

“Lower your mask momentarily prior to placing a wager” read one of many signs that would have been inconceivable not even six months ago. 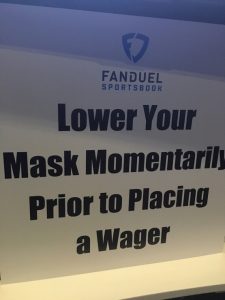 Monmouth Park is back

A couple of hours before I arrived at the Meadowlands, I had made my way from the last three of eight Atlantic City casino openings last week to Opening Day at Monmouth Park.

An unusual 5 p.m. launch for a brief turf card produced a sparse crowd, and concerns about overcrowding did not come close to fruition.

Not only was there plenty of room inside and outside, but the 25% limit on capacity was not threatened inside the conveniently air-conditioned William Hill Sportsbook.

There was no questionnaire or security check in Oceanport, although the track had the most obvious temperature check of the 10 casinos and racetracks that reopened last week.

No outside food or drink was permitted at Monmouth Park, and no coolers, either — bucking a decades-long trend at the track.

It took a little sleuthing to find out that the intriguing hamburgers and craft brews some patrons were enjoying came from Monmouth Burger. 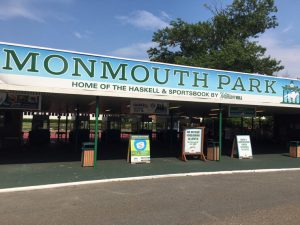 Getting a handle on track reopenings

And how did the handle work out at the two tracks?

On Friday, the long weather delay forced a “hurry up” schedule for the later races, becoming a major contributor to a handle of just $2.45 million, ending a streak of 15 straight cards this year of $2.5 million or better.

The following night, $3.03 million — the fifth $3 million card of 2020 — was wagered, led by stalwart trotting rivals Atlanta and Manchego as Atlanta turned the tables in a rematch from just two weeks earlier.

But for a lucky few, the highlight was a spectacular $216 payout on Sunday’s ninth race longshot winner Promise Illgetyou. A 50-cent trifecta play on 1-2-4 paid an astounding $2,826.40.

After five Atlantic City casinos reopened on Thursday, Caesars, Bally’s, and Harrah’s joined them on Friday.

The pent-up interest in getting any semblance of “back to normal” had been evident at the Landshark Bar & Grill on the Boardwalk near Resorts on Thursday night, when a hopeful diner at 8 p.m. was offered a discouraging 10:30 p.m. table time.

The reopenings would have drawn larger crowds if not for an announcement by Gov. Phil Murphy just a few days earlier banning indoor dining even at the planned 25% maximum, while also knocking indoor drinking and smoking from the menu.

The lone holdout on reopening is Borgata, the market leader.

“Our guests expect a special experience when they come to our property and if we cannot provide that level of hospitality, we feel it best that we remain closed until such time that the governor lets us know it is safe to offer food and beverage,” a casino spokesperson said in a statement.