Launch this week could begin the wave of the future in the U.S. 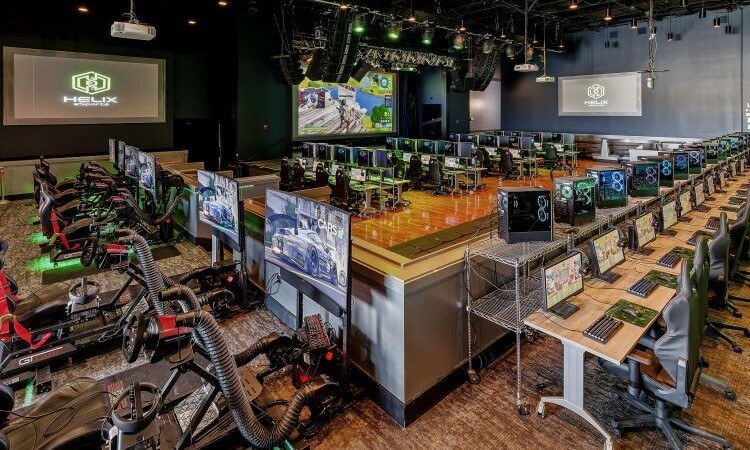 New Jersey already is a well-known pioneer in the U.S. for all sorts of legal, regulated gambling options — and now an eSports company is about to add to that status.

On Monday, eSports Entertainment Group is expected to complete its five-day “soft launch” of its gambling platform, setting the stage for EEG to be the first eSports-focused sports betting app in the country.

The company’s vie.gg platform will allow gamblers to wager, at the outset, on tournaments of games such as Call of Duty, Counterstrike Global Offensive, League of Legends, and Defense of the Ancients 2. EEG has a partnership with Bally’s casino to offer the wagering, and bets on classic American sports could follow.

In an interview last week with NJ Online Gambling, EEG CEO Grant Johnson said that he envisions a “slower rollout” than was seen with the launch of traditional sports betting in New Jersey in mid-2018.

Johnson added that his likely gambling audience may not have a strong affinity for such traditional betting, so his company intends to focus — at first, anyway — solely on eSports aficionados.

“This is an underserved community of fans of hundreds of thousands who have been betting offshore,” Johnson said of the prevalence of illegal sportsbooks that can be found on the internet.

Johnson pointed out that more than 200 universities in the U.S. already have varsity eSports teams, with many of them offering full scholarships to top players. He expects both experts and fans to gravitate toward a legal betting option for the activity.

Down the road, Johnson said, there likely will be seasonal events designed to pique interest such as a version of the NCAA men’s basketball March Madness tournament.

There have been occasional eSports events available for wagering before in New Jersey, Johnson noted, though only with specific approval required each time by the state Division of Gaming Enforcement. A bill passed recently in Trenton and then signed into law by Gov. Phil Murphy has put eSports on a closer playing field to older sports by easing some of the restrictions tied to such wagers.

Based on previous data and also on state regulatory limits, Johnson said he expects wagers to be more modest for eSports — mainly in the $20, $30, and $50 range — rather than the occasional six-figure bets on football and other sports that create media headlines.

EEG had planned to make news in late January with the first skill-based eSports wagering event in the U.S. — a 256-player Madden ’22 contest with $8,000 in prize money at stake. Johnson told NJ Online Gambling, however, that the event — to be held at Hard Rock casino in Atlantic City — has been postponed until mid-March with the hope that the COVID-19 pandemic might subside enough by then to allow for a full crowd to enjoy the competition.

Johnson said that based on New Jersey regulators’ concerns about underage eSports players, the typical team of five players for a competition such as League of Legends would have to feature a majority of players at least 18 to be considered for potential bets on the vie.gg site.

The site will offer wagering odds that will be familiar to a typical sports bettor, Johnson said, but he added that there will be a learning curve for many enthusiasts of eSports in particular.

Three other jurisdictions in the U.S. and Canada, Johnson said, are actively considering approving wagering on eSports. He said he expected each of them to closely follow the New Jersey launch to see if it seems feasible.

As the first eSports-specific betting app, Johnson said he expects to find an eager audience. But he added that as a “Lewis and Clark” pioneer in the gambling space, his company will move forward carefully. That means no “in-game betting” on contests — at launch, at least — although such betting has become quite popular with football and basketball bettors in particular.

The soft launch last week produced one issue that Johnson said his company had quickly resolved. “That’s exactly why you have a soft launch,” Johnson said.

EEG already has opened eSports centers at Patriot Place in Foxborough, Massachusetts — the retail area surrounding the New England Patriots’ football stadium — and in North Bergen, just across the Hudson River from Manhattan. A third such site is planned for the campus at UCLA in the coming months.

Each site is larger than 10,000 square feet, with 100 or more gaming stations and consoles for fans to gather. Johnson said that the new North Bergen site was attracting more than 6,000 visitors per week before the onset of the pandemic. 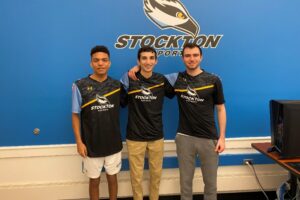 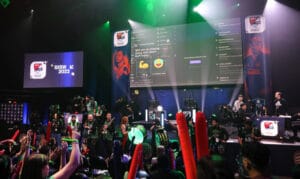 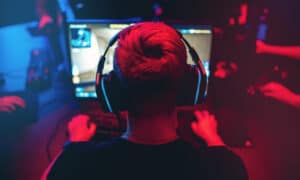