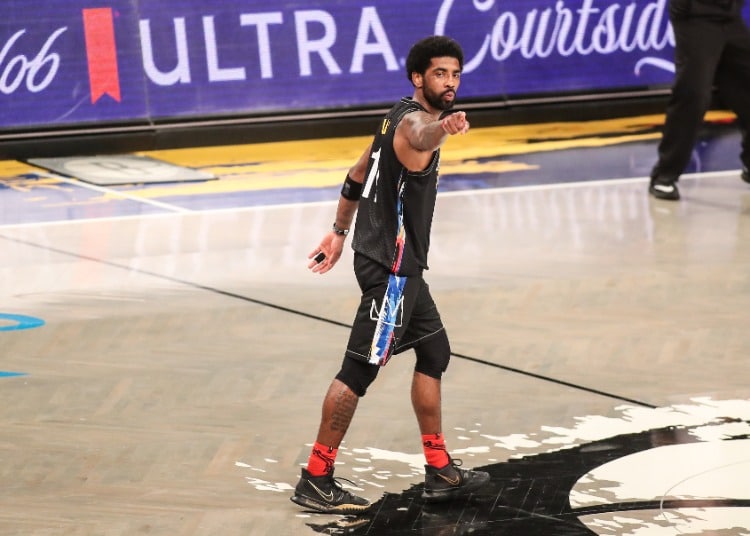 The NBA futures markets could conceivably fall into some disarray, as news surfaced over the weekend that Brooklyn Nets star Kyrie Irving is contemplating sitting out home games this year instead of getting the COVID-19 vaccine.

According to a FOX Sports report, a NBA memo sent on Sept. 1 explained that, due to local indoor sporting event vaccine mandates in San Francisco and New York, unvaccinated players for the New York Knicks, Golden State Warriors, and Brooklyn Nets would be prohibited from practicing or playing on their home courts without proof that they’ve at least received their first coronavirus vaccine shot.

On Monday, Irving was absent from the Media Day festivities in Brooklyn, instead appearing on Zoom, where he refused to address his vaccine status and whether he would suit up for home games this year.

Does Kyrie Irving expect to play in home games this season?

At a news conference last week, Nets GM Sean Marks was asked if New York City’s mandate would result in players being banned from the court.

“Regarding if they could play today, I can’t comment on who could play and so forth. There would obviously be a couple people missing from that picture,” Marks said. “I won’t get into who it is, but we feel confident in the following several days before camp everybody would be allowed to participate and so forth.”

As for the Warriors, Andrew Wiggins is one player who is refusing the shot and asked for a religious exemption. The NBA denied his request and announced that without getting inoculated, he would indeed be off the court for the team’s home games.

The NBA has announced the following: pic.twitter.com/6t1spKMU35

As for Irving, he hasn’t officially said he hasn’t gotten the jab, but all signs indicate that the famed flat-Earther has thus far avoided the vaccine.

So with the Kyrie news trickling out over the weekend, a big question is: What does this mean for the Nets’ title odds?

A prominent NBAer just texted me that Kyrie Irving is a “contrarian without a cause” and that is just a perfect sentence.

So far, not much. If anything, the Nets’ title odds continue to get tighter, with DraftKings offering the Nets as NBA champs at +200, which is relatively far off the +235 consensus. Currently, the Nets are the favorites to win the NBA championship this year, with PointsBet and BetMGM offering the best odds, at +240. The Warriors, for what it’s worth, can be had for +1300 on FanDuel.

At the end of the 2020-21 season, the Nets were +350 to win it all for this coming season. Clearly, plenty of money has come in on that end, and even with the will-he-or-won’t-he Irving news, it just hasn’t been enough to move the (wait for it) needle.

Apparently, the industry isn’t yet ready to act on Irving when it comes to futures bets, despite the very real possibility the Nets could be without him half the time. Of course, having Kevin Durant and James Harden in the fold helps to soften the blow.

The Nets tip off their campaign at the Milwaukee Bucks, where they are currently a pick ‘em on DraftKings to win. After that, the squad travels to play the Philadelphia 76ers, where they are -1.5 favorites. It’s their next game, at home at the Barclays Center against the Charlotte Hornets on Oct. 24, where the prospect of a Kyrie-less squad exists.