New Jersey’s July gaming revenue numbers are in, and in the first full month of regulated sports betting in the state, the runaway winner was an operator that didn’t get in on the fun until nearly halfway into the month. According to figures released by the New Jersey Division of Gaming Enforcement, the FanDuel Sportsbook at Meadowlands Racetrack in East Rutherford, which opened on July 14, was the clear leader in gross gaming revenue, recording a win of $1,357,477. Extrapolated over the full 31 days, that would equate to $2,337,877 in revenue.

But you don’t need to add those 13 lost days to get Meadowlands to No. 1. The sports betting venues ranked as follows for July: 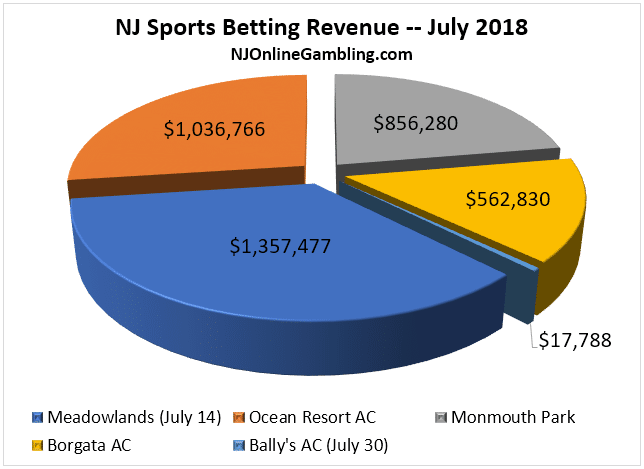 Down month outside the Meadowlands

While Manhattan-area bettors found a relatively convenient new home at the FanDuel book, the competition suffered in July.

Even though June was only a partial month for sports betting — Monmouth Park and Borgata both started taking wagers on June 14 — Monmouth raked in $2.28 million in revenues that month and Borgata made $986,000. Both fell off precipitously in July.

Overall, sports wagering gross revenue totaled $3.8 million for the month at all venues, barely up at all over the $3.5 million generated in just 17 days in June.

While there might be an initial instinct to pin that on fewer sports options in July, the reality is that the NBA finals ended on June 17 and World Cup soccer was in action almost as long in July (15 days) as it was in June (17 days). Major League Baseball did endure one dead stretch in July due to the All-Star break, but still, it was hard to anticipate the action being down this much at Monmouth and Borgata.

By sport, that handle (and win percentage) broke down as:

It’s not exactly a surprise that baseball is king this time of year. It certainly won’t be king in the fall, and that isn’t all that’s poised to change.

Resorts (which is partnered for mobile sports betting with the only operational mobile book in the state, DraftKings Sportsbook) opens its land-based sportsbook tomorrow.

So August revenues, which will include mobile, might look nothing like July. And when NCAA football and regular-season NFL start in September, the landscape will shift again.