The Jets are (probably) locked in with their pick, while the Giants offer a lot more intrigue 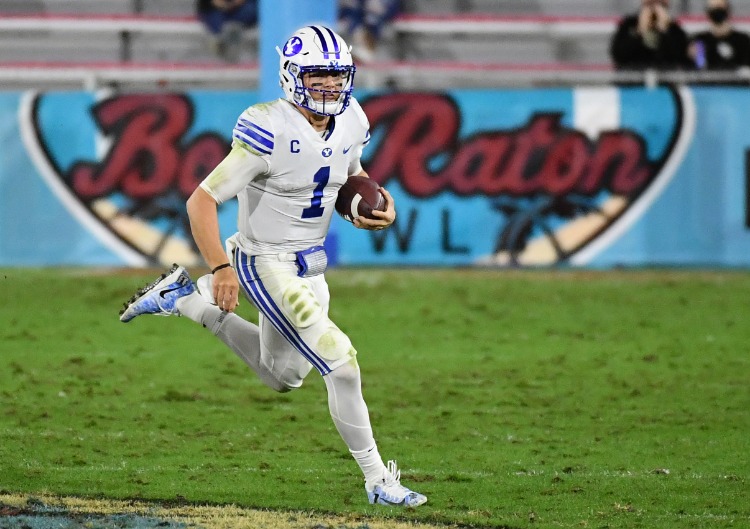 The NFL draft is next Thursday night, and for the first time in what seems like 672 years, New York Jets faithful will (probably) not be booing when the Jets make their first pick.

After the Sam Darnold experiment failed (or was it the Adam Gase experiment? Discuss …) the Jets have a clear path at the No. 2 pick to take any quarterback they want not named Trevor Lawrence.

And that quarterback is going to be BYU’s Zach Wilson, at least according to every pundit and sportsbook, and it’s not even close. At FOX Bet, Wilson is -2500 to be the Jets’ first pick. Furthermore, if the Jets somehow don’t take Wilson or trade down, FOX Bet still has the Jets as -20000 (those four zeros are correct) to take someone on the offensive side of the ball. Despite that, FOX Bet has Micah Parsons, a linebacker from Penn State, at +900 to be the Jets’ first pick.

Zach Wilson's QB coach thinks the Jets are a "perfect fit" for the BYU QB.https://t.co/zDKtc7Waom

Truth be told, there’s really no mystery with the Jets here. They are drafting a quarterback, and that quarterback is going to be Zach Wilson. Buuuuuut …. if the Jets are somehow smokescreening the world here, note that Justin Fields is +1200 and Trey Lance is +2200 on FOX Bet.

Probably the more interesting question, then, surrounds what the Jets are going to do with their next two picks, which come at number 23 and 32. While no books are offering odds on what the Jets will do, exactly, most mocks have the team addressing needs on the defensive side of the ball.

The New York Giants, on the other hand, offer plenty of intrigue heading into the draft. As evidenced by some recent first round picks that had the draftnik community shaking their heads, it’s fair to say almost anything is on the table for General Manager Dave Gettleman’s fourth draft with the team.

In fact, over at FOX Bet, they have the team at equal odds, -118, to pick someone on the offensive or defensive side of the ball.

For even more specific picks, FOX Bet — along with DraftKings and PointsBet — are offering odds on individual players. The favorite is wide receiver DeVonta Smith of the University of Alabama, and the best price on him is +250 at DraftKings. After that? Things quickly go off the rails. FOX Bet and PointsBet have Rashawn Slater, an offensive lineman from Northwestern, at +350 and +330, respectively. DraftKings has him priced down at +500, tied with Parsons, the Penn State linebacker, but he can be had for +550 at FOX Bet. Jaylen Waddle, another Alabama wideout, shows up next, with his best price at +600 on DraftKings.

DeVonta Smith or Jaylen Waddle – which Alabama wideout should the Giants take in the NFL Draft? https://t.co/5LIEdd6XGR pic.twitter.com/JidCPGOLSv

It’s fair to say that if Smith is off the board when the Giants pick, no one knows what’s going to happen. If the team is hellbent on finding another dynamic wideout to pair with the recently signed Kenny Golladay, Waddle — who many experts see as a potential Tyreek Hill-type of difference maker — is the clear choice.

If there’s a darkhorse candidate here for the Giants, it may be South Carolina cornerback Jaycee Horn, who’s widely considered the second best corner in the draft after Patrick Surtain II of Alabama. He’s +1000 on DraftKings, with an over/under of 13.5 on BetMGM.

One bet, however, that appears to be a slam dunk is offered at FOX Bet: Will the Giants trade their first round pick? That’s priced at -550 on the “no” side, and incredibly, there might be value there as Gettleman has never in his career as a general manager traded down — this dates back to 2013 — and the Giants have not been rumored to be looking to trade up.

No Action On The Field, But Huge Betting Action At NJ Sportsbooks For Unusual NFL Draft