The latest in a nonstop barrage of deals between sports teams and gaming companies sees the New York Jets pushing the NFL's boundaries.

The sports organizations that sued New Jersey in 2012 to stop the state from allowing sports betting are walking on murky ground these days.

But some of the franchises in those leagues are plowing ahead — including a pair of New Jersey-based teams.

Just days after British bookmaker William Hill announced its deal with the Devils, the hockey team also partnered up with Caesars Entertainment. And it wasn’t long before the Jets stole all the headlines, first when word started to spread about a possible sponsorship contract with 888 Holdings, then when the announcement hit Wednesday morning that the Jets had signed a gaming partnership with MGM Resorts.

The Devils deals were sandwiched around Monday’s announcement by the NHL that it is embracing a partnership with gambling — no “integrity fees” needed, thanks. So those agreements brought little drama.

But the Jets’ moves come with considerably more controversy attached. The NFL has been reluctant to dip its toe into sports betting waters, and here are the Jets, making deals with a pair of legal gambling companies.

Even ahead of an official announcement about the 888 deal, three-story orange banners touting “888.com” have appeared outside MetLife Stadium on Jets game days.

888 as a company has never been bashful about promotion. It once offered former Giants wide receiver Hakeem Nicks $88,000 to his favorite charity if he would change his name for one year to “888.com.” It was a silly stunt, but it worked, getting plenty of publicity.

The NFL doesn’t allow teams to advertise sports betting sites, so the Jets thus far are tiptoeing around it, living in the gray areas.

Then again, gray areas are at the core of the pro sports leagues’ relationships with gambling. They’ve long embraced daily fantasy sports companies like DraftKings and FanDuel, both of which now are leading the way in offering sports betting in New Jersey.

The Meadowlands Racetrack’s FanDuel Sportsbook offers a free shuttle from MetLife Stadium to its location. But if you go to a Jets or Giants game and don’t know where to look, you may not be able to find it.

Such is the dance of the NFL these days.

The Dallas Cowboys — whose owner Jerry Jones continues to push the envelope on league autonomy even as his team remains mired in mediocrity — less than two months ago announced the first casino sponsorship of an NFL team, with the giant Native American WinStar casino, located in Oklahoma, 90 minutes north of Dallas.

Less than two weeks ago, the NFL’s Ravens announced a deal with Horseshoe Casino Baltimore, which is in the same neighborhood as M&T Bank Stadium. From all the cross-promotional advertising showing up at both sites, fans won’t be able to ignore the connection. Look for more NFL hookups ahead.

Skating away with deals

As for the Devils, the new deal with Caesars will feature a 5,000-square-foot “premium restaurant and bar” on the main concourse. Caesars also gets exposure on the 4,800-square-foot outdoor LED board, on the Prudential Center’s 80 digital boards, and branding on club seat tickets and premium wristbands. Devils fans at 10 selected home games will try to win $1 million in a Caesars-sponsored “Shoot for a Million” on-ice promotion between the second and third periods.

Pennsylvania isn’t quite up and running with sports betting yet, so for now fans of the Philadelphia 76ers — a team owned by the same folks who own the Devils and the Prudential Center — will be offered “a series of playful online and in-game contests.”

The Devils also will offer plenty of exposure to William Hill, including a branded “sports lounge” and recognition of the first hockey shift of the game by the Devils as the “William Hill Line Change.”

There was a time when rivals would pay a big premium for exclusive status at an arena. But those times are a-changing, and the deals by Caesars and William Hill with the Devils/Prudential Center are evidence of that.

The challenge for the Devils — who already were pioneers in the online poker space back in 2014 — will be to avoid turning off the many fans who just want to show up and cheer on the Devils without risking money on the game. 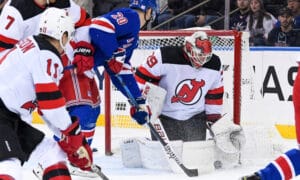 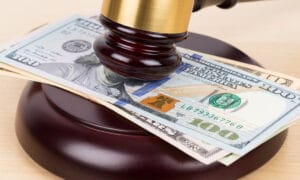 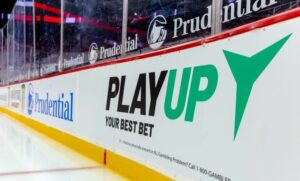