Rebuck then laid out out for an SBC North America webinar audience New Jersey’s history as the groundbreaking U.S. state in both online casino gaming and the expansion of legal sports betting outside of Nevada.

Resorts, New Jersey’s first casino, opened in 1978, and for more than a decade the state enjoyed what Rebuck described as “a monopoly on the Eastern seaboard.”

But in the early 2000s, Pennsylvania and New York began opening their own casinos, “and New Jersey was unprepared for the competition.

“The casinos in Atlantic City that had been doing OK were now struggling to obtain market share, and by 2010-11, these were desperate times,” Rebuck noted. “The industry was fearful of being able to sustain itself, which would lead to economic downturn in the entire region. So the state moved toward expanding gambling.”

In the same period, the casinos could no longer afford to provide a $30 million annual subsidy to the state’s horse racetrack purses, leaving another key industry in peril.

Rebuck didn’t use another adage — “Necessity is the mother of invention”  — but ultimately, that proved to be accurate.

The first key development was a November 2011 referendum that won an overwhelming vote of support for a state law that would allow Las Vegas-style sports betting at the state’s casinos and racetracks.

That led to the law’s passage in January 2012, and to a federal court injunction blocking it seven months later after a lawsuit was filed by the NFL and its four sports organization partners.

But legislative approval of online casino gaming, Rebuck explained, was a different story in 2013.

“We had a nine-month window from legislation being passed to take the idea from inception to reality,” Rebuck said. “We did our research, we got advice from foreign regulators, from foreign companies. Hundreds of companies from overseas would advise us on how to do things.

“We had a lot of long night meetings. I was determined to hit the target, even though many industry people told me I was never going to do it.”

Rebuck added that some gaming operators took an attitude of wanting to wait until state regulators completed their work, at which point they thought they could step in immediately.

“I said, ‘That’s at your risk,'” Rebuck explained. “When we hit the nine months, whomever is ready is going to go live. I told the foreign companies, ‘We don’t just flip a switch. There are things you are going to have to learn about doing business in the U.S. It’s not going to be identical to what you do, and we’ll tell you what restrictions you are going to have.'”

In late November 2013, legal online casino gaming was born in the U.S. (in Delaware as well, though on a much smaller scale).

“That was a long night, where we fully expected breakdowns or meltdowns if things did not go well,” Rebuck said. He cited as an example the possibility the U.S. Department of Justice would have problems with the geolocation efforts to prevent would-be gamblers in neighboring states from gambling online in New Jersey.

“It was after about 24 hours that I could go to bed and say, ‘You know what, I think we’re OK,'” Rebuck recalled. “We knew we had to be on top of our game. The main thing we were focused on was not to have a scandal, not to have a meltdown — and we never have.

“The message for us is, continue to be a leader, keep doing things better in the future. We don’t want to run into some of the traps that you are seeing politically in Europe,” Rebuck said, referring to backlash by the public over perceived oversaturation of gambling advertising.

While sports betting was the first to gain approval in New Jersey, the protracted legal battle finally decided by the U.S. Supreme Court in the state’s favor in May 2018 left that form of legal gambling almost five years behind in terms of launch.

Now, New Jersey leads the nation in both online casino gaming and sports betting revenue — with about 90% of the latter revenue also coming from online sources. 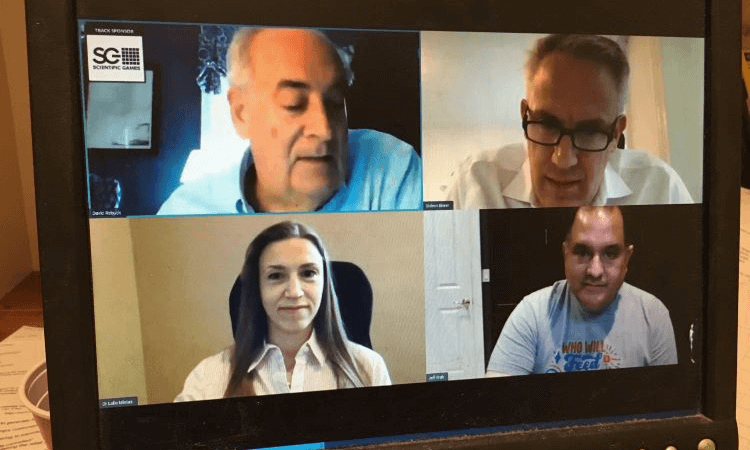 Moderator Gideon Bierer, a managing partner at Partis Solutions who has a master’s degree in economics from Oxford University, asked his panelists why the U.S. — known on many levels as a champion of free markets — for the most part caps the number of licenses for online casino and sports betting.

Jeff Ifrah, the founder of Internet Development and Economic Association (iDEA) and a longtime adviser to companies seeking to engage in U.S. gambling expansion, said that it stems from “bad economic theory.”

“States don’t fully understand a couple of things,” Ifrah said. “No one understands like New Jersey does that there is an entire offshore industry. So stop thinking that if there is just one [legal] player in the market, that brings in all the action. All that is going to happen is that offshore is going to continue to thrive.

“When you have one market in particular, that is raising more awareness, yet people can only find offshore guys [by searching on] Google.”

Ifrah said he has attempted to explain to regulators that having additional participants doesn’t mean each gets a smaller slice of revenue–  “the pie gets bigger.”

He cites the historical example of the United Kingdom, with unfettered competition, faring far better in online gambling than France, which severely limits options.

“A focus on what’s best for the consumer makes a lot of sense — and you are competing against the black market,” Mintas said.

Rebuck said that he expects late-arriving states to gambling expansion to continue to adhere to models of either the state lottery running operations, or having the state’s casinos and/or racetracks providing the gaming.

Bierer expressed bewilderment over the fact that online gaming companies have to pay licensing fees or share revenue with brick-and-mortar operators. He also suggested that Pennsylvania’s high-tax, high-revenue choice was the superior option — which led to a raised eyebrow from Rebuck.

“If you compare the tax rates, I’m not sure that operators will agree that they are superior,” Rebuck replied. (New Jersey lawmakers have no intention of emulating Pennsylvania.)

Ifrah added that “Pennsylvania should be doing way better than New Jersey” in terms of gross gaming revenue for its casino and sports betting industries, but he suggested its high tax rates discourage infrastructure and technological upgrades.

“They will have to make changes to attract more industry,” Ifrah predicted.

Online operators at a disadvantage?

Bierer described the billions of dollars in fees that online gambling operators will have to pay in the next decade in the U.S. as an “enormous transfer of  wealth” to land-based rivals who control the licenses. He also wondered if legislators specifically intended for that to happen.

“We were most concerned about saving an industry, or at least reducing that risk,” Rebuck said. “A concern that we might negatively hurt online operators? That really didn’t bother us at all.”

Mintas said that for consumers’ sake, the more gambling options the better, because “then everyone has to fight harder for  a customer.”