If there’s one consistency among industry leaders, regardless of the business, it’s that they’re constantly looking for ways to improve their product. Golden Nugget Casino, which stands alone atop the NJ online casino industry, is no exception to this rule, having recently rolled out yet another batch of enhancements, including quality-of-life improvements, new promotions, and adjustments to its game offerings.

Unfortunately, sports betting has yet to be integrated into the lobby, but until it is, gamblers in New Jersey will have plenty to sink their teeth into.

Golden Nugget is known as one of the most aggressive online gambling sites in New Jersey when it comes to adding new game titles, having peaked at over 550 games. So it initially came as a slight surprise when it announced that it would be retiring some of its titles.

Several table games, including blackjack, baccarat, and roulette variants, are on the list, with the justification that these games were pulled from the market entirely. Less popular video poker games, like Amaya Deuces Wild, were also sent packing. The good news here is that similar (and arguably better) versions of all the expired games are available on Golden Nugget Casino, with the operator going so far as to recommend alternatives: 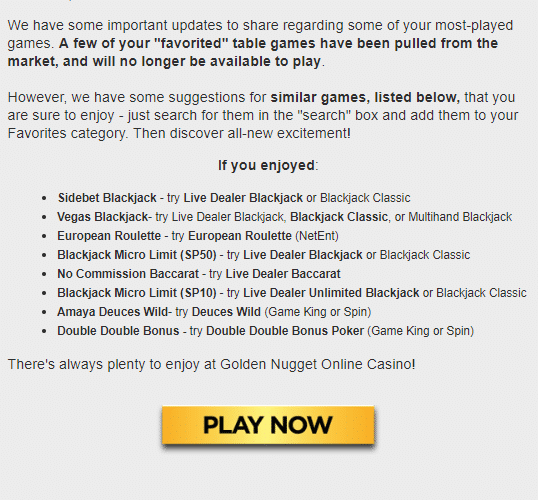 Notice that just about wherever possible, Golden Nugget recommends players check out its Live Dealer games. And yes, players who enjoy a more relaxed, social atmosphere while gaming will certainly see the operator’s robust live option as a viable alternative.

However, a word of caution: The rules for Live Dealer Blackjack games are generally not as favorable as they are for some of the strictly digital games on the site. Casual players may not notice much of a difference, but sticklers for the best possible odds will probably take frown upon rules like the dealer taking a hit on soft 17. Still, overall, the differences between Live Dealer Blackjack and digital variants on the site (of which there still are plenty) are pretty negligible in the short- and medium-term.

Speaking of Live Dealer, Golden Nugget has expanded the hours of the format again. Now, all of its games are available from 10 a.m. – 3 a.m., seven days a week. On top of that, two blackjack tables now offer minimum wagers of just $10 a hand, with a third offering a $15 per hand price of entry. That’s generally lower than what players at land-based casinos in Atlantic City can expect to find, especially on weekends, when the minimum price of admission can soar to as high as $25 per hand.

For now, the extended hours give Golden Nugget Casino a slight leg-up on Live Casinos that are powered by Evolution Gaming, including Hard Rock Casino and Play SugarHouse, which offers games from 11 a.m. – 3 a.m. However, we’re still of the mind that Evolution-powered Live Casinos offer the better overall product, if only by a bit.

Golden Nugget has also added a swatch of new slot titles, including the exclusive All That Cash (96.0% return-to-player), yet another Slingo Game (Slingo Carnival), and a new jackpot slot entitled One Red Cent Deluxe. The latter, provided by Everi, juxtaposes old and new, taking the form of an old-fashioned three-reel slot, but adding crisp visuals, a bonus game where players can win a multiplier on their winnings, and five progressive jackpots.

The jackpots range in value from a small boost of around $50 all the way up to the grand prize, which at the time of this writing sits at more than $21,000.

Currently, Golden Nugget Casino supports more than 500 slots, among the most in the New Jersey market, with new titles being added on a very regular basis.

To the chagrin of punters, Golden Nugget Casino has yet to unveil its sports betting product. When the operator launched its temporary land-based book in August, a company executive speculated that the mobile sports app would be available by around the end of September. Yet, September (and October) have come and gone, and bettors still have no way to wager on whether the downtrodden New York Giants or Jets will win another game this season.

Even when Golden Nugget does go live with its sports betting app, it will be at a competitive disadvantage, as it will be forbidden from offering lines on NBA games. This is due to a conflict of interest involving owner Tilman Fertitta, who owns the Houston Rockets. It is believed that Play SugarHouse, which operates its online casino under the Golden Nugget license, switched over its sports betting operation to the Monmouth Park license because there it would be able to offer a full slate of NBA bets.

Golden Nugget plans to place increased emphasis on college basketball betting to partially offset the lack of NBA. And assuming the app is integrated into its award winning and highly trafficked iGaming site in New Jersey, Golden Nugget stands to do just fine.

On another positive note, the operator did debut its permanent land-based book back in early September, which generated a tick under $500k for the month.

Golden Nugget has recently turned its attention to the Pennsylvania market, where it looks to offer both online table games and slots. Although not as recognizable a brand in Pennsylvania — where it does not operate a land-based casino — as it is in New Jersey, Golden Nugget has a lot of upside in the PA market. Not only does it bring a wealth of experience to the table, but remember, it has already defied long odds in New Jersey, implementing strong marketing strategies and an aggressive approach to expansion that resulted in it becoming the market’s unequivocal revenue king.

In addition, because Golden Nugget will be purchasing its own online casino license, it won’t be hampered by oppressive regulations that force third parties licensed under a land-based casino to act as subdomains of the primary license holder’s site, and to pollute their sites with visual branding from the same.