The Giants head to Big D with an offense, led by Daniel Jones, that might be clicking at the right time 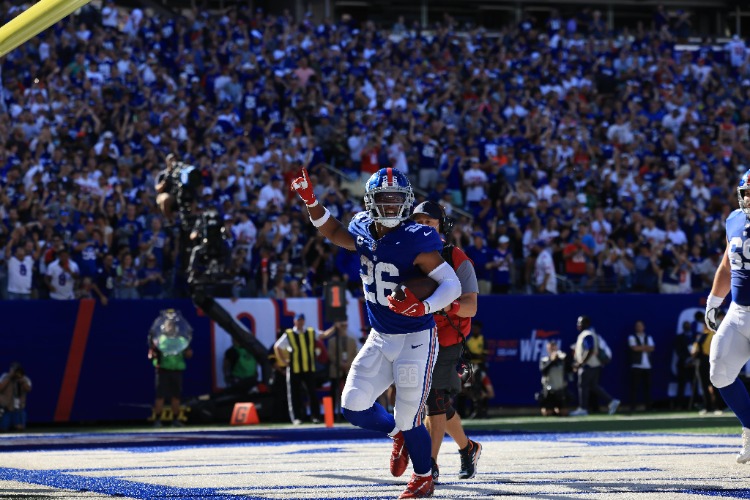 Daniel Jones is the No. 2-ranked quarterback in the NFL, according to Pro Football Focus.

This is, to say the least, one of the more unexpected developments thus far in the 2021 season. Of course, the Giants are still 1-3, though it doesn’t take a magician to see they could just as easily be 3-1, having lost back-to-back last-second games to the Washington Football Team and the Atlanta Falcons.

Damn isn’t this a pretty sight? Daniel Jones ranking up there with Brady, Herbert and Kyler 🔥 pic.twitter.com/KbaAlPkEcg

And if they were 3-1, something tells us the 7 points the Giants are getting at -110 everywhere in the sportsbook world this week against the Dallas Cowboys might be a little closer to … well, 5 points? Point being, if you think the Giants are A) ascendant and B) closer to a 3-1 team than a 1-3 team, then getting a full touchdown in Dallas is a screaming buy.

You could even play it a bit safer and grab the extra half-point at Barstool Sportsbook to make it +7.5 for -121.

Of course, there is also a flip side to all this, and for that, let’s head back to Pro Football Focus.

According to its rankings, Dallas is the third-best team in the NFL. The Giants? They’re 21st. You can get Dallas giving 14.5 points at BetMGM for +225.

Bottom line on this NFC East battle? Dallas is almost certainly the more talented team, but if Jones continues to play like he might be the second-best quarterback in football, then the Giants have more than a puncher’s chance.

The moneyline on a Giants outright victory? At SugarHouse and Unibet, the team can be had for +265.

But perhaps the best bang for the buck is with the over/under, which is set at a healthy 52. The over can be had for -109 at Barstool, and if Dallas plays the game it wants to play — namely, fast, as the Cowboys lead the league in fewest seconds between plays at 23.59 per Football Outsiders — the Giants are going to have to hustle to keep up.

When it comes to player props, this game has plenty to choose from, and plenty of scenarios that lend themselves to single-game parlays.

Basically: Do you think the Giants are going to be able to run the ball with Saquon Barkley? If they do, and if they keep Dallas off the field, then Barkley overs + game unders + Dallas receiver unders would be one way to go. For instance, on Caesars: Barkley over 54.5 rushing yards + under 50.5 total points + under 67.5 yards for CeeDee Lamb + under 61.5 yards for Amari Cooper comes in at +1200.

Speaking of Barkley: He’s been on the field a lot. Like, 90% of the snaps. He is fully back from injury and is gamescript-proof. As a result, that 54.5 rushing number feels low. And while his rushing + receiving prop isn’t up yet, that’s also a number worth watching.

Of course, this game can just as easily swing the other way, with the Cowboys asserting their dominance. If that’s the angle, Zeke Elliot over 75.5 (-110) rushing yards seems like a smash, and Dak Prescott to throw over 2.5 touchdowns at +150 on Caesars looks like a great value proposition. 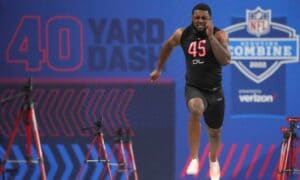 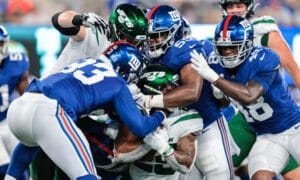 Online NFL Betting Is Shattering Records, According To GeoComply Data