More retail sports wagering in New Jersey despite the vast majority of bets being placed via mobile devices and computers.

A picturesque Friday afternoon looked much like just another day at Freehold Raceway, the longest-running racetrack in the U.S. with a history that dates back to the 1830s.

But a new sign outside the main entrance headlined “Important Notification” heralded the arrival of Parx Sportsbook.

And once inside, some observant patrons in the lounge area noticed at least one of the nine self-service sports betting kiosks.

While many of the horse racing-minded visitors breezed right past them, several track officials stood at the ready to assist quizzical potential players.

The odds supplier, it turns out, is Kambi — which is not too surprising, considering that Freehold co-owner Penn National last year entered into an exclusive deal with Kambi.

But Penn National in January also entered into a high-profile deal with the controversial Barstool Sports brand, paying $163 million for a one-third share of the company.

Barstool, which boasts more than 60 million monthly unique visitors, will be the public face of Penn National’s sports betting efforts across the U.S.

Joint ownership at Freehold Raceway – so who calls the shots?

But when it comes to Freehold, it’s complicated. That’s because Freehold has been a 50-50 ownership partnership since 1998 between Penn National and Greenwood Racing.

And as the new sign out front implies, Parx Casino and Racing in the northern Philadelphia suburb of Bensalem — about 45 miles southwest of Freehold — is owned by Greenwood.

Just this month, a Barstool app went live in Pennsylvania, which Penn National previously had announced as its Barstool test market to “kick the tires” before a more expansive launch.

Other states in the first wave, Penn National CEO Jay Snowden added, are expected to be Illinois, Michigan, Indiana, New Jersey, and Iowa.

But on a Friday race card day, there was no sign of Barstool.

Then again, there isn’t yet a specially dedicated sportsbook space — the kiosks compete for the attention of horse players with similar devices for the races.

Mobile sports betting – where the real action is

Nearly 90% of the sports betting revenue in New Jersey has come from online wagering — and there is a lot of it, with more than $600 million of the $668 million in wagers in August coming from online sources.

Freehold’s more important direction is what to do with the three “skins” — online betting app platforms — that it has.

Each of the state’s nine Atlantic City casinos and three racetracks gets three skins, and dozens of partnerships have been struck in the wake of the landmark May 2018 ruling by the U.S. Supreme Court siding with New Jersey’s efforts to have the Professional and Amateur Sports Protection Act of 1992 stricken as unconstitutional.

Most of the casinos and the other two racetracks scrambled to launch brick-and-mortar sportsbooks in time for the fall 2018 football season. Freehold officials were more tentative, for whatever reason, so they are the second-to-last to offer on-site sports betting.

Caesars casino, which is adjacent to Bally’s on the Atlantic City Boardwalk, simply directed its customers next door — actually, within the same building — when Bally’s opened its sportsbook two years ago.

On Friday, one “multilingual” gambler wise in the ways of both playing the ponies and betting on sports patiently explained to his pal — another senior citizen — how the game is played.

Point spread, money line, parlays — this was all a brave new world for one horse player.

But there are plenty of parallels to the gambling.

If you bet a “sure thing,” you’ll probably win — a paltry amount.

If you go for the longshot, you’ll get a big payout if you win — but you probably won’t.

Trifecta vs. three-team parlay — you need them all to come through for you.

No fanfare at Freehold

Freehold had the softest launch of the 16 casino and racetrack reopenings and sportsbook launches I have attended since such sites began reawakening in June from COVID-19-related shutdowns back in mid-March.

The first bets were taken at Freehold on Thursday, but there was no press release, nor is there any information on the track’s website.

The current hours of operation are noon to 8 p.m., with plans to lengthen those hours in the coming weeks.

But Freehold faces a challenge that its rival racetracks don’t.

The Meadowlands Racetrack, 45 miles north and east of Freehold, is part of the fabled Meadowlands Sports Complex. The track also races on weekend nights, so track visitors would notice the FanDuel Sportsbook — in pre-pandemic times — as a good place to watch a ballgame, place a bet at the window, and chat with fellow patrons about their latest winning or losing streak.

FanDuel, the daily fantasy sports giant, also heavily promotes its brand in the state, making the bulk of the betting public in North Jersey aware of both the brick-and-mortar site and its popular sports betting app.

Monmouth Park, about 17 miles east of Freehold, opened up its William Hill-branded sportsbook several years before the “book” could actually take bets.

It has a similar “sports bar” feel to the Meadowlands version, so summer weekend visitors to Monmouth Park no doubt sometimes have translated into winter sports bar visitors who want a hardcore fan atmosphere while watching the big games.

Challenges ahead for Freehold

Freehold’s lounge is comfortable, but it doesn’t compare to its rival sports bar/sportsbooks.

It’s also not clear if Parx — as opposed to FanDuel and William Hill — is willing to spend much money on advertising. A sportswriter friend of mine lives one mile away from Freehold Raceway, and on Saturday he was surprised to hear that brick-and-mortar sports betting was now an option at the track.

Finally, there is the relationship between Penn National and Greenwood Racing. Penn sued Greenwood a decade ago over what it claimed was foot-dragging on the part of Greenwood over its claims that it would build an off-track wagering horse race betting site at the former Garden State Park racetrack in Cherry Hill.

Pennwood, the joint venture that owns Freehold, also has been a partner in building OTWs around the southern part of the state. In the lawsuit, Penn alleged that Greenwood was protecting its own gambling sites in the region at the expense of the partnership.

Greenwood recently settled an unrelated lawsuit about the same property, with the owners of the current shopping mall on the site giving up their claims of having a right to open a sports betting parlor there. 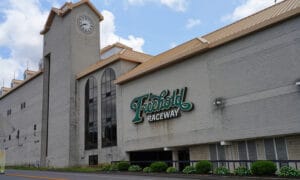